On the night of Easter Sunday, April 10, 1955, Ruth Ellis took a .38 calibre revolver from her handbag and fired six shots at David Blakely outside The Magdala Pub, in Hampstead, London. Blakely was taken to hospital with multiple wounds and was subsequently pronounced dead. Gladys Kensington Yule, a passer-by, also sustained a slight wound when a bullet fired by Ellis ricocheted off the pavement and hit her in the hand. Ellis made no attempt to leave the scene, asking a witness to call the police. She was arrested and charged with Blakely's murder. The jury at the trial took just 14 minutes to convict her, and she received a mandatory death sentence and was the last woman to be executed in the UK. 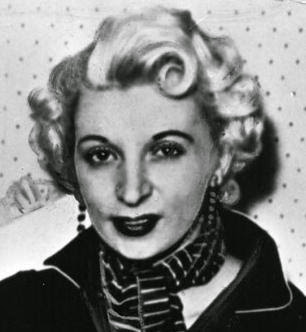 'I intended to kill him,' she told the court at her trial for shooting her lover. In 1955 that was enough. But, as the High Court heard last week, the last woman in Britain to be hanged was herself a victim of violence. Was it also class that did for her?
By Catherine Pepinster
Sunday, 21 September 2003; from The Independent & The Independent on Sunday

Ruth Ellis was many women: a mother, a nightclub hostess, a wife, a sister, a killer. But, like Myra Hindley, she is remembered as a caricature: the hard-faced bitch with the peroxide hair. The last woman to be hanged in Britain. But last week she became a person again, with all the complications that involves, as the High Court appeal into her conviction for murder in 1955 began. Her QC, Michael Mansfield, depicted a woman tormented who today would never be convicted.

The story of Ruth Ellis is well-known: that she took a shotgun and pumped four bullets into her lover, the racing driver David Blakely, outside the Magdala pub in Hampstead on Easter Sunday, 1955. The opinions of those of a certain age will always be influenced by Ellis's portrayal by Diana Dors in 1956's Yield to the Night. Others will think of Miranda Richardson's extraordinary performance in 1985's Dance with a Stranger: a complex mixture of survivor and victim, able to be tough to others, with a voice which rose to a thin screech whenever she was tormented by her abusive scoundrel of a lover, played by Rupert Everett. Last week Ellis became someone else: this time, according to Michael Mansfield, she was the subject of battered women's syndrome. He argues that the murder conviction be replaced with one of manslaughter.

But who was she really? Years ago, at the time Dance with a Stranger was first released, I interviewed her sister Muriel Jakubait for a newspaper feature. There in her living room was a family photo in a silver frame. It was of a different Ruth, a gentler, more vulnerable one. A Ruth forgotten. Later she took me to Ruth Ellis's grave. It is in a Buckinghamshire graveyard, not far from that of Blakely. There is no headstone, no memorial; nothing to attract the ghouls. Only a few flowers, often red carnations, left by her sister who has tried, year after year, to keep Ruth Ellis a human being, not a tabloid shorthand for evil. Muriel Jakubait explains her sister through the narrative of her whole life, not just her fatal love affair with Blakely. And that narrative reveals her as this: a very English killer. For her story is a story of class.

Ruth Ellis was born on 9 October 1926, the fourth child of a failed musician, Arthur Neilson, and his Belgian wife Elisaberta. Frustrated in his career, Neilson drank heavily and abused his wife and children. Both Ruth Ellis and her sister Muriel were raped by their father. "You have to understand how Ruth and I were brought up," says Mrs Jakubait. "Our father was a strict and frightening man. We were cowed, kept down. Made to feel insignificant."

Ellis yearned to escape her background, telling her sister and her mother that she was going to make something of herself. But for a teenage girl in the war years, growing up in a dysfunctional family and with little education, there were few prospects.

After a short time in a munitions factory, and with an illegitimate son by a Canadian soldier, Ellis trod a path long familiar to women with no real opportunities. She traded on her youth and looks by becoming a "hostess" at a West End drinking club, entertaining clients in the flat upstairs. It was there that she met the dentist George Ellis, a man she married in an apparent attempt to find middle-class respectability. After giving birth to a daughter, and too many beatings, she left.

Morrie Conley, later exposed in the Sunday tabloids of the time as the head of a Mayfair vice ring, had seen that Ruth Ellis was a sociable woman who attracted punters and made her manageress of The Little Club in Knightsbridge. In Fifties London, the club afforded middle-class businessmen, RAF officers, and alcoholics with private incomes an opportunity for drinking, adultery and shedding their outer veneer of respectability.
It was at the club that she met the wealthy businessman Desmond Cussen, and later David Blakely, with whom she fell in love. Blakely was louche, good-looking, a man spoilt by his divorcee mother and with a penchant for racing cars. The relationship with Ellis was tempestuous: for all her apparent easy-going sociability, she had as foul a temper as Blakely. They were both uneasily jealous of one another, both suspicious of the various alternative lovers with whom they consorted. She became pregnant by Blakely twice; the first time, she had an abortion, and on the second occasion, Blakely, who followed in her father and husband's footsteps with his violence, punched her in the stomach, causing her to miscarry.

Ellis shot him just a few days after the miscarriage, and following several days of arguments, tears and remonstrations. The last bullet was fired into him from just three inches away.

A defendant is always likely to have a better chance if there is any empathy with defence counsel. Ellis and Melford Stevenson appeared to have none. In the dock she appeared cold and uninvolved, apart from shedding tears when shown a photo of Blakely. Her behaviour, according to Helena Kennedy QC, is something we understand better today: "So many witnesses, particularly women who have gone through an emotional battering, disengage from events and give their evidence in a cool, remote way."

This became evident when Ellis was asked what she had intended to do when she shot David Blakely: "I intended to kill him."
Faced with her impassivity, it was difficult for Stevenson to convince the court that she should be acquitted of murder because her emotional disturbance had been affected by jealousy. The judge dismissed the argument, directing the jury to consider the charge of murder. They took 14 minutes to find her guilty. There was no mention of Desmond Cussen's role in providing her with the gun, or the emotional impact of the miscarriage.

Since her death Ellis has been many different women. To the tabloids and pulp crime writers, a villain. To law reformers, a cause célèbre. To Michael Mansfield, the example of a syndrome. Domestic violence experts, however, disagree. One said last week that the existence of the syndrome itself is disputed. "Labels like this aren't helpful. Her problem was she found a man who was a controlling bastard."

Nearly 50 years after her death, Ruth Ellis still haunts us. Her husband committed suicide; so did her son. Her daughter, Georgie, died last year of cancer, after campaigning to have the case reviewed. Her sister refuses to let her be forgotten: "She was a lovely girl, who did not receive the justice she was entitled to."

Ruth Ellis, though, seemed to think justice was done. Before Albert Pierrepoint hanged her at Holloway, before she stepped to the gallows, she gave him a small smile. Ruth Ellis wrote to Blakely's mother, accepting her culpability: "I shall die loving your son. And you should feel content that his death has been repaid."