THE DESOLATE GARDEN by Daniel Kemp 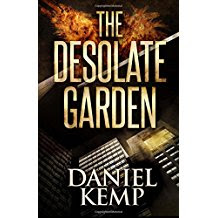 Harry Paterson’s father, Lord Paterson has been murdered. The police have ascertained when, and how, but no one knows why...money? Could be, the Paterson family are extremely wealthy.

Daniel Kemp writes in a very visual way; he provokes the reader’s imagination. I can see the opening scene as a piece of theatre. The stage is dimly lit, almost dark. A piano, just one soft note at a time, picks out a sinister child’s nursery rhyme..maybe Three Blind Mice or Oranges and Lemons.

The effect of the combination of darkness, light, shade and sound sets an ambivalent atmosphere of uncertainty for the viewer. The written scene will have a similar effect on the reader. We are drawn into the beginning of a narrative which we know took skill and courage from the writer.

Lighting gradually presents a man, seated at a small table. He picks up a glass of whisky from the table, stares into it, then sips. The piano stops. A woman’s voice calls out to him..”tell me a joke”...as she speaks, the light falls on her, she is very beautiful. He responds to her.. “come and join me.”

It’s a pivotal moment; this meeting of Harry Paterson and Judith Meadows drives the narrative.

The amount of research that has gone into The Desolate Garden is phenomenal. The writer leads us back to the actions of Harry Paterson’s Great-Grandfather, Maudlin Paterson during the 1936-1939 Spanish Civil War. His actions precipitate events that are yet to come. The reader won’t need an extensive knowledge about that conflict, but an illegitimate child is born and without him there would be no story.

Daniel Kemp’s knowledge of the Cold War is extensive. I’m of the same generation as he...I grew up knowing about the Iron Curtain, and, as Russia was then, the USSR. I don’t recall there being a lot on News reports about how, if at all, we got any information about life in the USSR, but I remember reports about the Cuban missile crisis.

At its closest distance, Communist Cuba is just 103 miles from Florida...too close for comfort.

For some time previously the Soviets had openly been sending weaponry to Cuba, including surface-to-air anti-aircraft missiles (SAMs). To deflect any criticism about this from the Republicans, who were busy campaigning for the November congressional elections, Kennedy had said he would not protest about such defensive weaponry being installed in Cuba, but warned that if the Soviets ever introduced offensive weapons, 'the gravest issues would arise.'

For 14 days during that October of 1962, the world held its breath as President John F. Kennedy and Party Leader Nikita Khrushchev tried to reach a compromise and avoid nuclear war.

By the third day the President publicly announced the presence of Soviet missiles in Cuba, and ordered a blockade to prevent the introduction of further missiles, further to this, he demanded that the Soviets withdraw the missiles already there. (Both for legal reasons and for resonance with Franklin Roosevelt's 'Quarantine Address' of 1937, the term 'quarantine' was substituted for 'blockade'.)

If Khrushchev did not capitulate within a day or two, a US air attack on Cuba would follow, followed by an invasion.

After a long period of tense negotiations, an agreement was reached between U.S. President John F. Kennedy and Khrushchev. Publicly, the Soviets would dismantle their offensive weapons in Cuba and return them to the Soviet Union, subject to U.N. verification, in exchange for a U.S. public declaration and agreement to avoid invading Cuba again.

In relation to Daniel Kemp’s The Desolate Garden, it seems to me pertinent that I add these paragraphs about the Cuban Crisis and the stamp of the Cold War on Europe. It illustrates what dangerous times we lived in...and still live in, bearing in mind what happened three weeks ago in the sleepy town of Salisbury UK.

Some people believe, because of the nerve agent used in Salisbury, we are on the brink of another Cold War…I don’t know, but bearing in mind how closed off, mentally and physically, the USSR was during the years of the Cold War, I don’t think it would be a good thing. Certainly not for Human Rights.

Countries are always interested, intrigued and alarmed by what other countries are doing. Maybe espionage has always existed..agents, double agents. I was too young, at the time, to understand about the so called Cambridge Five, the young men lured into spying for the USSR, but I’ve read about them since. The West had spies within the USSR, spying for us and it is against this backdrop that The Desolate Garden is thrown into relief.

There’s a shattering betrayal too with an ending that I didn’t see coming and totally blew me away.