THE RAFT OF THE MEDUSA Jean-Louis André Théodore Géricault


Jean-Louis André Théodore Géricault (26 September 1791 – 26 January 1824) was a profoundly influential French artist, painter and lithographer, known for The Raft of the Medusa and other paintings. Although he died young, he became one of the pioneers of the Romantic movement.

Born in Rouen, France, Géricault was educated in the tradition of English sporting art by Carle Vernet and classical figure composition by Pierre-Narcisse Guérin, a rigorous classicist who disapproved of his student's impulsive temperament, but recognized his talent. Géricault soon left the classroom, choosing to study at the Louvre instead, where he copied from paintings by Peter Paul Rubens, Titian, Diego Velázquez, and Rembrandt for about six years, from 1810 to 1815. There he found a vitality which he preferred to the prevailing school of Neoclassicism. Much of his time was spent in Versailles, where he found the stables of the palace open to him, and where he gained his knowledge of the anatomy and action of horses. WIKI

Géricault was beautiful, controversial, supremely talented. He had an affair with his aunt. The pair had shared an intense bond since Géricault's boyhood, but by his twenties he had matured into an eye-catching figure. 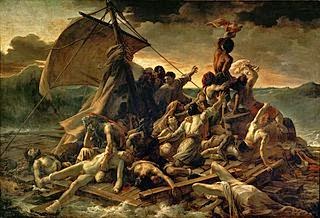 His teacher Carle Vernet claimed he 'had never seen such a good-looking man ... his legs were, above all, superb': Alexandrine-Modeste clearly thought so too and aunt and nephew started an affair. In 1816 Géricault fled to Rome in an attempt to distance himself from the imbroglio but he was back within a year and in 1818 Alexandrine-Modeste gave birth to his son. It was, therefore, in a state of turmoil that he started work on The Raft of the Medusa.


“Théodore Géricault was the quintessential Romantic artist: he died young and in torment, leaving behind him one great masterpiece and the legend of a painter touched by both genius and madness. 'Suffering is real and pleasures are nothing but imaginary,' he said; it was an extraordinarily bleak outlook and what is truly terrifying is that he believed it.

The painting that made his reputation was exhibited in the Paris Salon of 1819 as “The Scene of a Shipwreck”, but is universally known as “The Raft of the Medusa”. It tells the macabre story of one of the most notorious scandals of Restoration France: the abandonment on a jerry-built raft of 147 passengers and crew of the frigate Medusa when it came to grief off the coast of Senegal in 1816. 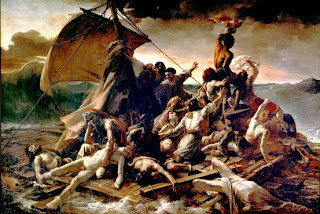 As the Royalist captain, officers and more well-to-do passengers headed for the shore in the ship's boats they cut the rope towing the raft, leaving those clinging to its planking to their fate. Provisioned with six barrels of wine, two of water and a sack of soggy biscuit, the castaways' ordeal lasted for 13 days, during which time they suffered from exposure, malnutrition, dehydration, mutiny, murder and, most thrillingly for the audience back in France, cannibalism.

When the raft was finally sighted there were only 15 skeletal survivors left and strips of flesh - human biltong - were hanging on the mast to dry. When the full story of the abandonment of the raft came to be known in France it became a liberal cause célèbre, the perfect example of the callousness of Royalist misgovernment.

Until the second decade of the 19th century, action painting in France—whether dealing with mythic, religious or historical events, and even if violent in content—often lacked real energy. In France, the gorgeous colours and symmetries of Poussin in the 17th century, the chiselled nobility of David in the late 18th and the austere beauty of Ingres at the start of the 19th, all gave way to the explosion of Romanticism. One painting, above all, might be said to have initiated the new movement: Théodore Géricault's ‘The Raft of the Medusa.’”
From the daily telegraph 1 April 2007
Michael Prodger


Géricault revolutionized the depiction of real events, taking for his subject a scandal only a few years old and "romanticizing" it. While the painter visited hospitals and morgues to study the moribund and cadavers, the figures on the raft here hardly look as though they have just suffered through dehydration, starvation, cannibalism and madness. They are muscular. Some are beautiful.

Today's viewer will probably respond less to this picture's political and historical relevance than to the drama of its composition. In terms of art history, it looks both backward and forward.

“"The Raft of the Medusa," while maintaining the symmetry of Poussin, changes painting once and for all. It is sculptural and architectural, but depicts no architecture. Two great overlapping triangles, suggesting both a ship's sails and the ocean's waves, define the space. They also contain 19 human figures (one barely visible, four others quite obscure) in various postures, combinations and stages of life: the living, the dying and the dead, old and young, black and white, male and—perhaps—female. Some have faces; others turn away from us. We can read the painting both from left to right and from bottom to top.

The picture represents a specific moment. The survivors have just sighted the Argus, the boat that will eventually rescue them but is now a speck on the horizon, actually passing them by. At the top, two men, one an African crew member, are waving banners, shirts or kerchiefs. The figures express a range of emotions, from eagerness and exultation to incredulity, despair, hysteria, resignation and apathy. Géricault's preliminary sketches (one smaller canvas hangs elsewhere in the museum) document the growth of his ambitions for the painting. The most shocking figure, absent from the earlier sketch, is a dead person on the lower right. Its gender is uncertain: Géricault used a male friend as his model, but the chest looks womanly. The head is outside the frame. We see primarily the person's midsection, with pubic hair exposed. Whoever this is, or was, has one leg still wrapped around a beam of the raft. Clearly the person will soon slip into the sea.

Another apparently dead youth has the beauty of a Greek sculpture. The most arresting figure, the only one staring straight out at the viewer, is an older, well-muscled man who supports the youth, perhaps his dead son. He looks like someone out of Michelangelo. His gaze suggests his transcendence of both hope and despair.

The painting's center has what seem to be cracklings or bubbles, which distort both the figures and their colour. The painter's use of bitumen on his palette came at a cost: This particular black appeared lustrous at first, but over time it created a wrinkling that cannot, according to the experts, be corrected.

If not as great a colourist as Delacroix, Géricault made an appropriate palette of deathliness. The picture's primary hues are sickly, pallid grey and yellow flesh tones, but there is a range of hues from alabaster to black. The colouring seems to work against the classic muscularity of the figures' bodies.

But there is more. Nature frames humanity. At the painting's bottom, top and sides, the waves and sky—in their colour and brush strokes both intense and delicate—compete with the humans for our attention. The planks of the raft, especially when viewed from up close, reveal delicate brushwork applied meticulously to reproduce the grain and colour of the wood. Flickers of light on the beams leaven the thick brown impasto.

First and last, there's action itself. Not just the waving gestures of the men at the top, but also the play of sea and light. The wind is blowing from right to left, against the tilt of the human action. The light shines from left to right. The two forces operate in perfect antithetical harmony. Géricault learned from Caravaggio all about chiaroscuro, and then went on to discover by himself a way of depicting human life and death in a painting that contains both natural tempestuousness and compositional calm. He has put pictorial symmetry at the service of ferocity. Two dimensions have never felt less flat.

Gericault’s preparations for the painting were meticulous: he befriended Alexandre Corréard, the Medusa's engineer who had survived the ordeal of the raft and who, with the ship's surgeon, Henri Savigny, had written a celebrated account of the shipwreck; he commissioned the ship's carpenter to build a scale model of the raft; and, most notoriously, in order to immerse himself in death he filled his studio with the heads and limbs of executed criminals borrowed from a nearby hospital. The paintings he made from these body parts are the most horrific still lifes in art, but also among the most beautiful.

The Raft of the Medusa itself is an enormous work, measuring more than 23 feet by 16: 7 meters by almost 5. To paint such a subject at such a size for the official Salon can be seen as a sign of political protest but it can also signal an artist who has lost all sense of what is appropriate.

The other pictures he was producing at this period - scenes of graphic sex and murder - also reveal a severely disturbed man. Within a couple of years he was painting portraits of inmates of a mental asylum, possibly as a fellow patient. Géricault was no clear-headed agitator but a man whose grip on reality was loosening.

Today, “The Raft of the Medusa” hangs, with other large canvases of that period, in one of the Louvre's grand galleries. It has darkened with time. Some of its figures are barely visible, and many details are occluded.”
From Willard Spiegelman’s essay; “Revolutionary Romanticism.”

Sadly, I haven’t seen Géricault’s painting.
Posted by billierosie at 04:36