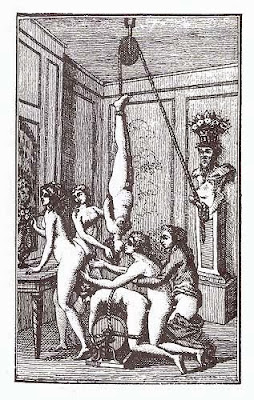 This is in response to a very disappointingly unnuanced article published in the Atlantic Monthly.


So, you’ve just seen Fifty Shades of Grey, or you read the book, or both and you’re thinking… wow, that’s looks sexy. I could go for some of that….
Okay, I really hope you read this fully and take what I’ve written here to heart and give it some deep consideration.


It turned you on? Wonderful. Have a wank. Have five. But there is very little chance, statistically that you are a masochist or a sadist, or even all that wired to sexually enjoy the kind of explicit power dynamics involved in domination or submission. So, right off the top, enjoy the fantasy. You don’t have to take it into your real life to be cool or legitimate or trendy.


4. Being someone who gets their sexual pleasure from causing another pain is problematic within a culture that condemns acts of violence. Generally, it takes a person who is wired this way many years to come to terms with their appetites and figure out how to engage in their type of preferred erotic activity while still staying within the bounds of the law and of humane ethical behavior. And some sadists NEVER manage it. So, cosying up to one carries risk. Always. I’m not engaging in victim blaming. When someone breaks your rules, breaches the boundaries you have set, they are ALWAYS the ones at fault. BUT, violence, especially associated with sex is a taboo in our society. People who get off on it are transgressive by nature. Transgression is about rule breaking. So, you are dealing with a person who is sexually aroused by breaking rules and you are depending on the fact that they will break the ones you like broken, but not the ones you don’t. YOU have an obligation of self-care. You have an obligation to understand that you are placing yourself at greater risk. If the world were fair, all sadists would be scrupulously ethical. But the world is not fair. When it gets fair, I’ll let you know.


5. Being someone who is sexually aroused or gets erotic pleasure from being hurt, humiliated, degraded, restrained, having one’s ego decimated, engaging in symbolic self-annihilation, etc. is also problematic in our culture. Our culture emphasizes the need to avoid pain, to care for oneself, to keep healthy, to hold oneself in high regard. A masochist also faces a difficult path in negotiating his or her way through mainstream society. Their need to get the kind of stimulation that satisfies them often leads them to take risks that others would not take. Just because a person gets sexual satisfaction from being caned doesn’t mean they are asking for or deserve to have their spine broken. But to not acknowledge that in letting someone cane them, they are taking a chance that this might happen is to be willfully stupid. Furthermore, servicing a masochist also requires having limits yourself. And although most masochists are ethical will accept what those limits are, some will not be able to do that. And that can make them very dangerous.


6. Shaming, bullying or manipulating someone into being submissive or taking pain when that isn’t what gets them off is FUNDAMENTALLY lMMORAL. No matter how cool the movies, books, the press or sex toy sales companies say it is. It is a deeply emotional and traumatic experience for anyone whose psychosexuality doesn’t lend itself to this kind of thing.


7. Shaming, bullying or manipulating someone into being dominant or inflicting physical or mental pain is JUST AS IMMORAL. And I suspect there are even more adults being cajoled into this kind of behaviour than anyone wants to admit. Acting in the capacity of a dominant or a sadist can be deeply traumatic to a person who is not naturally inclined to this.


8. Sex is not safe. It’s not safe in nature and it’s not safe in human society. People are vulnerable in sexual situations, both physically and emotionally. Society can inscribe laws that attempt to mitigate the risk and prosecute people who violate them. You can take sensible precautions, and minimize the risks on a personal level, but you can never eliminate them completely. If the world were fair, it would be different, but the world isn’t fair.


But you can be thoughtful and self-reflective and refuse the Koolaid. Please, in this instance, stop thinking about what might be cool to have, or be or do. What do you need? What do you really need sexually, erotically, inside? Please ask yourself that.


I do not want to dissuade anyone from pursuing their kinks. I am not condemning, pathologizing or shaming anyone who has non-mainstream sexual tastes. I am not a hypocrite. I just want to try to inform you that you have a duty of care to yourself that goes far beyond this month’s hip thing, or this week’s sexual flavour. Ultimately, I want you alive, uninjured and untraumatized. And it is foolish to ever depend on anyone else to ensure you remain that way. If the world were fair, you could depend on others, organizations, websites, groups to help keep you that way, but the world is not fair.


I have mixed feelings about the debate regarding Fetlife and outing dangerous people. Even if Fetlife were to allow users to publicly accuse people of rape or lesser unacceptable behaviour, it would be a grave mistake to believe you were any safer. Meanwhile, its proponents seem unwilling to address the rare but grave issue of false allegations. A lot of rapes happen when people meet in a bar under very vanilla auspices. Do we post notes naming rapists in bars? I still think the best response to a rape is to formally accuse that person and make the law work. If what is at issue here is that the law, the police and prosecutions are not dealing with this, then that’s the battle we should be fighting – for everyone, kinky or otherwise.


You need to acknowledge that when you step into the world of transgressive sexual practice, you have walked into a less safe place. It doesn’t mean you shouldn’t be there, but it means that you need to be very vigilant and take responsibility for your safety.


You need to practice the care of self. Be well. Be careful.


Thanks to Madeleine Morris (aka Remittance Girl)for letting me post this brilliant essay..read more of Madeleine's stuff here