THE LADIES OF LLANGOLLEN; the two most celebrated virgins in Europe 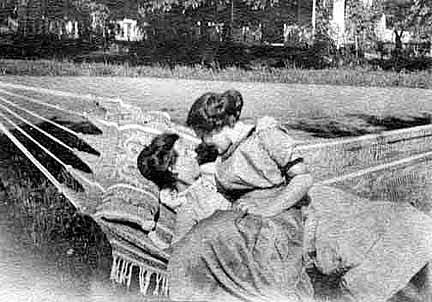 This is the story of two aristocratic ladies who eloped together to Wales in 1778 and lived happily ever after in a cottage ornée, surrounded by gardens full of Gothic follies. Their names were Lady Eleanor Butler and Sarah Ponsonby, but they were better known as the Ladies of Llangollen, "the two most celebrated virgins in Europe".

Although the Ladies wished to live in "delightful retirement" - reading, writing, drawing and gardening - the fashionable world soon beat a path to their cottage door. Their visitors included the Duke of Wellington, Lady Caroline Lamb, Josiah Wedgwood, William Wordsworth, Thomas de Quincey, Prince Paul Esterhazy and the Duke of Gloucester; their pen-friends included Queen Charlotte, Lord Byron and Louis XVI's aunt. There were many days when the Ladies had up to 20 visitors in relays, entertaining literally morning, noon and night.

Why did two country spinsters become so famous? It is hard to imagine today how sensational it was in the 18th century for unmarried ladies to live independently, whether singly or together. In addition, the circumstances of Eleanor and Sarah's elopement were positively melodramatic.

Eleanor was the youngest daughter of the de jure Earl of Ormonde, of Kilkenny Castle (his titles were attainted, like those of other devoutly Catholic Irish peers). Eleanor's brother, Robert, paved the way for restoration of the Ormonde earldom by converting to Protestantism, and he made a brilliant marriage. Eleanor's sisters married well, too.

But for Eleanor - clever, bookish, satirical and already 39 - there was no such hope. What better way, then, to make amends to God for brother Robert's apostasy, than by putting Eleanor in a nunnery? It would be a cheap way to dispose of her, too.

Twelve miles away, at the mansion of Woodstock, her orphaned 23-year-old friend Sarah Ponsonby was suffering the unwanted attentions of her middle-aged guardian, Sir William Fownes. His wife, Betty, whom Sarah dearly loved, was still alive, but her health was failing and Sir William over-eagerly anticipated the day when he could take pretty Sarah as the second Lady Fownes.

Both women felt trapped in an unbearable situation. Clandestine correspondence flew back and forth between Kilkenny Castle and Woodstock, and they decided to elope to England together (elope did not have the same marital connotation that it does today, it just meant run away). Dressed as men, carrying a pistol and Sarah's dog Frisk, they rode through the night to catch the ferry at Waterford, but it did not sail and they were forced to hide in a barn. They were caught and taken home.

Sarah fell seriously ill with a fever, but Eleanor, faced with imminent incarceration in a French convent, ran away again - this time to Woodstock, where she hid in Sarah's bedroom and a housemaid, Mary Carryll, smuggled food in to her. When this was discovered, the Ormondes declined to collect their errant daughter and after 10 days the Fownes family caved in. Sarah and Eleanor were free to go.

No melodrama, however, would be complete without retribution - while Eleanor, Sarah and their maid, Mary, were touring Wales in search of a home, Sir William was struck down with "strangulation of the stomach", followed by a stroke, and after a fortnight of barbaric treatments - "blistered and glistered and physick'd" - he died in agony.

The nature of Sarah and Eleanor's "romantic friendship" has naturally excited curiosity over the years. They referred to each other as "My Beloved" (or "My B"), then later as "My Better Half"; were certainly as devoted as any married couple; slept in the same bed; cropped their hair into short curls and habitually wore riding habits with mannish beaver hats.

So they were lesbians - or were they? Few who visited them thought so. The word romantic simply meant fanciful or eccentric in the 18th century. And it was the fashion for friends - male as well as female - to write and speak to each other in language which we now reserve for sexual partners.

Nor was it uncommon to share a bed with a sister or friend. The Ladies' hairstyles and hats followed a French fashion - besides, they were practical for the country - and they spent their money on books and home improvements, not on frivolous clothes.

My guess, from reading Elizabeth Mavor's excellent biography, is that Eleanor was a lesbian, whether she realised it or not (likely not, as it was unheard-of until an outbreak of "sapphism" at the French court brought it to English society's notice in 1789); but that Sarah - if she had not met Eleanor at the impressionable age of 13, and if she had not needed to escape from her guardian - might have settled down just as happily with a husband.

As it was, she settled down, for 50 years, with Eleanor. They took a five-roomed stone cottage on a hillside above Llangollen, renamed it Plas Newydd (New Hall) and began to extend and embellish it. Windows were gothicised and old stained glass panels inserted into them. A library was filled with finely bound books and curiosities of all kinds, including a lock of Mary Queen of Scots' hair.

They developed a passion for old, carved wood - whether from medieval churches or broken-up Elizabethan and Jacobean furniture. The staircase hall was lined with it, and a bizarre trio of canopies built on to the door and windows. The front porch incorporates, inter alia, carvings of the four evangelists, Latin inscriptions, 17th-century bedposts and lions donated by the Duke of Wellington (visitors soon learnt that to appear with gifts of carvings ensured a welcome).

The grounds became similarly elaborate as time went on and acres were added. Passing through a "ruined" Gothic archway, visitors could cross the rushing stream in its miniature ravine on rustic bridges; visit Lady Eleanor's Bower, overhanging the ravine, and a temple complete with a font stolen from Valle Crucis Abbey's ruins; see butter being made in the circular model dairy; admire peaches, nectarines and melons growing in the ornate glasshouse; and read poetic quotations on boards tacked to tree trunks.

It was all highly, fashionably Picturesque; it was also highly expensive. The Ladies never did learn to manage on a small income. Despite their family allowances and state pensions, they were often in debt - and when this happened, to cheer themselves up, they embarked on new improvements. They drank the best wine and kept several servants, including the faithful Mary Carryll as their housekeeper.

Mary was uncouth and formidable (her Irish nickname had been Molly the Bruiser), but the Ladies were touchingly devoted to her, and she to them. When she died, they erected an elaborate stone monument, under which they later joined her; and she bequeathed them an additional field, bought with her life savings.

After their deaths, Plas Newydd had several owners, including one, General John Yorke, who left an indelible mark on the house. Following their enthusiasm for old, carved oak, he elaborately lined their kitchen to form the present-day Oak Room, where all that remains from the Ladies' time is their initials carved into the mantelpiece.

General Yorke also half-timbered the house facade in black and white, with curious, carved decorations between the beams; and he crammed the interiors with oddities, including mementoes of the Ladies and such esoterica as the skeletal head of a sea-serpent.


In 1932 the house was taken over by Llangollen Urban District Council, and it opened to the public a year later. The house is well-maintained but the garden's remaining features are in sad need of restoration - for which a National Lottery Fund grant is awaited.

Elizabeth Mavor's biography, `The Ladies of Llangollen' (Penguin, £4.99), is on sale at the house.

The article is from The Daily Telegraph, 4th May 2002
by Anne Campbell Dixon

I was lucky enough to visit Plas Newydd only this week, with my friend Francis Potts -- it is wonderful and I felt privileged to briefly the ladies home. The journals are there for visitors to read -- steeped in love, an all consuming powerful love. It really doesn't matter one way or another whether Sarah and Eleanor were lesbians or not-- that they loved one another was enough; quite enough.

Plas Newydd is set in peaceful gardens surrounded by trees and includes the font from the nearby Valle Crucis Abbey.
The house is now a museum run by Denbighshire County Council. The circle of stones, in the grounds of Plas Newydd was used for the 1908 Llangollen National Eisteddfod.
Open Easter to October 10.00-17.00
Telephone +44 1978 861314