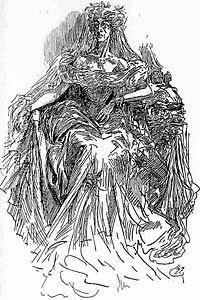 
What do Slaves and Submissives want from a Master, or Mistress? Once again I’m looking to the past to help me find an answer. In GREAT EXPECTATIONS, Charles Dickens gives writers of Erotica a template for a Mistress, in the character of Miss Havisham. Miss Havisham is clever and cruel. She knows all about psychological manipulation; she’s an adept.

And how we love our Slave and Submissive stories. Reading them, writing them. I’ll never forget when I first came to Erotica and read a Slave story, by Patrick Califia. I felt like I had come home. The girl in the story finally realises her dream. She is neither weird, nor insane. She’s simply different and that’s okay. It’s okay to be submissive. It’s okay to be different.

Away from fantasy land, I would rather die than submit to someone who has physical control over me. I am not turned on by cruel treatment; by someone’s desire to dominate me. But psychological control -- well, that’s something else. Like many people, I’ve succumbed to the terror, and unhappiness of mind games, without even realising it. 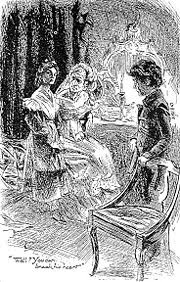 Miss Havisham, is a prototype of a Mistress. Miss Havisham, is what she is. Despite her sad story, she could have behaved differently. She devotes her life into seeking revenge on the male sex and she is training the beautiful Estella, to continue her work, by becoming a Mistress herself.


At the end of the novel, Miss Havisham tells Pip;

"Believe this: when she first came to me, I meant to save her from misery like my own. At first I meant no more. But as she grew, and promised to be very beautiful, I gradually did worse, and with my praises, and with my jewels, and with my teachings, and with this figure of myself always before her a warning to back and point my lessons, I stole her heart away and put ice in its place...

Dickens provides Miss Havisham with a back story.

As an adult, Miss Havisham fell in love with a man named Compeyson, who was only out to swindle her of her riches. Her cousin Matthew Pocket warned her to be careful, but she was too much in love to listen. At twenty minutes to nine on their wedding day, while she was dressing, Miss Havisham received a letter from Compeyson and realizing that he had defrauded her and she had been left at the altar, she falls into a sort of pathological grief, that defines her as a character and drives the plot of the novel.

So, once again, I’m looking to the great writers of the past, whether it’s the Greek story tellers, or the Victorians, to help me to understand where writers of the 21st century, find their inspiration. Whether we write about subs or doms, heroes or villains. Whether we write just for fun, for ourselves, or in hope of riches and fame, we owe a debt to those folk whispering forbidden stories in the firelight; or, like the Victorians, scribbling their little stories by candlelight, and ruining their eyesight in chilly rooms. We should thank them all.
Posted by billierosie at 09:54