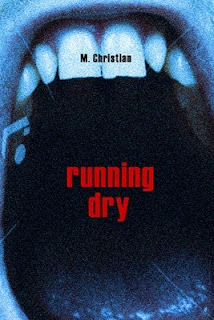 Here’s a real treat coming up! M.Christian’s first ever novel; RUNNING DRY is scheduled for re-print! I don’t know the dates yet, but Christian’s debut novel is being published by Camel books. First published in 2006, it’s getting the recognition it deserves.

In RUNNING DRY, M. Christian, elegantly re-writes the eternal themes of love, loss, betrayal, fear and death. With a flourish of his pen (or lap-top and cursor) Christian gives us a potent potpourri, that has little to do with gracious fragrances and everything to do with the pungent stench of bodily fluids; blood, bile, saliva and mucus.

There’s a mystery here. Who is Doud? Who is Sergio? What is their secret? Why has Doud given up on his art? Why is Sergio trying to seek out Doud? Why does Doud want to kill Sergio? What is Shelly’s place in all of this?

Yes, Doud and Sergio are monsters. They know it; Vince is a monster too. But he’s worse; he’s a killer without a conscience.

The scene where Doud fights Vince in the desert, is terrifying. It’s visual; like watching a film. My heart is racing, as I read. I can feel the heat of the desert, scorching my lungs. I screw up my eyes, against the glare of the sun; the painful blue of the desert sky.

Just listen to this;

“…the world acquired sound, the ground achieved traction, the air thinned, the rose-red glow ceased. As his body slowed from the blinding acceleration Doud had forced upon it, the monster’s body completely disintegrated. A body once ninety-five percent water became nothing but a desiccated five percent, falling apart into dust, ash, and a few brittle bones; life and moisture gone.”

Don’t you wish you’d written that? I do!

As a first novel,RUNNING DRY, anticipates the promise of more delicious work to come. Christian has certainly not disappointed, following RUNNING DRY with THE VERY BLOODY MARYS, the haunting ME2, the disturbing PAINTED DOLL and the exploration of one artist’s character, in BRUSHES.

For me, RUNNING DRY is every bit as good for a second reading; better. Buy it, borrow it, read it. It won’t fail you.
Posted by billierosie at 08:56