DIONYSUS AND WHO'S AFRAID OF VIRGININA WOOLF! 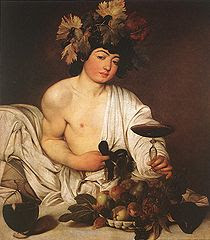 It’s two in the morning. In the opening scene of Edward Albee’s WHO’ AFRAID OF VIRGINIA WOOLF, George and Martha stumble home, tipsy, from a party. They bicker, in the way drunks do, about things that don’t really matter. They laugh, stupidly.
The loud snap of a door latch.

Martha; “What a dump!” The play begins.

Yes, is 2am and Dionysus is on the prowl. Dionysus is alive and well, this night in New England, in the 20th century. His red gaze falls on his two old disciples, George and Martha. The beast has been unleashed; he wakes from his long slumber, and snarls. George and Martha will act out Dionysus’ ritual and sacrifice. They will scream, and go mad. They will paw and claw at each other. They will do real damage. The ritual will end in death, just as it did every year, centuries ago, in Eleusis.


Dionysus, is the Greek god of fertility, wine, and ecstasy, A complex deity, Dionysus played two very different roles in Greek mythology. As the god of fertility, he was closely linked with crops, the harvest, and the changing of the seasons. As the god of wine and ecstasy, he was associated with drunkenness, madness, and unrestrained sexuality. His nature included a productive, life-giving side and a bestial, destructive side.


The audience knows immediately, that George and Martha have acted out this orgy of violent, verbal blood letting before. How we know; well, no-one tells us, it’s just a gut feeling. The humiliating word games they play; “Get the Guest.” The stories that they tell, suggest that this obscene rite has been performed before. George and Martha are in the grip of a repetition compulsion. Just as Hades and Persephone act out their ritual of death and re-birth, so do George and Martha. The Dionysian mysteries were repeated annually; the sacrifice, the ritual tearing of human flesh to please the god, ensured healthy crops and fertility for the coming year.

George and Martha are part of this eternal conflict. Their game is cyclical and they play it through to its bitter conclusion. Only then, can they achieve sanity, sanctity and restore order.


Two guests arrive and they are immediately drawn into George and Martha’s ugly, painful scenario.


I watched the film of WHO’S AFRAID OF VIRGINIA WOOLF, this week. I didn’t want to; I knew I was in for a rough ride. I’ve seen the stage play and seen the film. Both left me shattered. The film stars Richard Burton as George and Elizabeth Taylor as Martha. George Segal is Scott and Sandy Dennis is Honey. The film is made in black and white, which works well; the stark images, helping to convey the creeping, sinister feeling that everything is slipping out of control. Usually, I would prefer to watch a stage play over a film, but the close up camera work, lingering on facial expressions, adds to the tension. I feel as if I’ve watched a violation, something profane. Something I should have stopped, but was helpless to do anything.


There’s a hopeless slippage going on, that things are not what they seem.

At one point, Martha says to George. “Truth and illusion. You don’t know the difference.” George responds; “No. But we carry on as if we do.”

We no longer know which is which.


While Martha is showing Honey where the bathroom is, George tests Nick's verbal sparring skills, but the young man is no match for his host. Realizing he and his wife are becoming embroiled in the middle of marital warfare, he suggests they depart, but George cajoles him into staying.


Upon returning to the living room alone, Honey innocently mentions to George she was unaware he and Martha had a son on the verge of celebrating his sixteenth birthday.


Martha has broken the rules by talking about their son, and will be punished.


But at this stage of the play, it is Martha who is controlling the action. George seems like an amateur compared to Martha’s bitter vitriol.


Martha reappears in a new outfit - sleek fitting slacks and a revealing blouse - and when her husband makes a snide remark about the ensemble, she begins to demean his abilities as a teacher, then escalates her seduction of Nick, complimenting him on the body he developed as both a quarterback and a state boxing champion, while criticizing George's paunch.


Honey again raises the subject of George and Martha's son, prompting the couple to engage in a conversation, which Martha quickly tries to end without success.


To counterattack George's relentless comments about the boy, she tells their guests that her husband is unsure the child is his own. They argue about the colour of the boy's eyes until George threatens to expose the truth about the boy. Furious, Martha accuses him of being a failure, whose youthful idealistic plans for the future slowly deteriorated as he came to realize he wasn't aggressive enough to follow in his father-in-law's footsteps, leaving her stuck with a flop. Inebriated and upset by Martha's behaviour, Honey rushes from the room.


Honey’s comical hysterical exits and entrances, provide the audience with a much needed relaxation of tension. We are already feeling battered; we need to breathe before the next round of screeching annihilation. It’s a relief to be allowed to laugh; it’s only when we laugh at Honey’s antics, we realise how our jaws have been set in a grimace of horror, like Munch’s SCREAM.


Honey is the Greek Chorus, commenting inanely, sometimes profoundly. Often simply repeating the last word of the dialogue. Sandy Dennis’ wonderful comic timing, and physical comedy, releases us, from the tension, for a beat, or two.


“Following the torches as they dipped and swayed in the darkness, they climbed mountain paths with head thrown back and eyes glazed, dancing to the beat of the drum which stirred their blood. In this state of ekstasis or enthusiasmos, they abandoned themselves, dancing wildly and shouting 'Euoi!' [the god's name] and at that moment of intense rapture became identified with the god himself. They became filled with his spirit and acquired divine powers.” (WIKI)


The play is overshadowed by children, or the lack of them. Honey has had a “hysterical pregnancy.” “She goes up, she goes down.” One of the first questions George asks of Scott is whether he and Honey have children. George tells a story about a boy. Blonde haired and beautiful. He shot his mother and killed his father in a road accident. He’d swerved to avoid a porcupine. The story has a peculiar resonance with what George says to Martha about their own son.


Martha; “our son is coming home tomorrow, for his 16th birthday.” George tells her that their son is dead. He drove into a tree, trying to avoid a porcupine on the road. Martha bursts into a hysterical rage. George has killed their son. He has no right.


But George has taken control of the action. He was in control all along; the audience and Martha just didn’t realise it.


Martha asks George, where is the telegram notifying them of the death of their son? George says he’s eaten it. He hasn’t; there was no telegram. Honey colludes with George. She tells Martha, “He did eat it, I watched him.” George’s statement is a blatant, bitter parody of the Eucharist. Transubstantiation, the participant consumes the wafer, the body of Christ. The disciple consumes the Divine and becomes the Divine.


Was any of this true? Was there a son? Was a boy, killed? We don’t know, and that really is unsettling. We know that the telegram is a lie; what else is a lie?

There’s a strange feeling of calm as George begins to pray. The final act is entitled “Exorcism.” Is this an exorcism or a requiem? A prayer for reconciliation? Is it a funeral mass? While George is reciting the prayer, Martha talks. The two voices speaking simultaneously, produce a rhythmic, calming, lulling effect. Order is slowly being restored.

Honey; Amen. (So be it.) Honey, as the Chorus, speaks the final word of Dionysus’ revels. The games are over.


Kyrie Eleison is Greek, and is a part of many liturgical rites in Eastern and Western Christianity.


Dionysus is sated and sleeps.
Posted by billierosie at 04:09