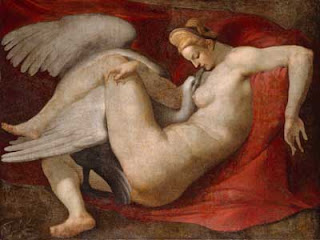 WHY CAN’T WE TALK ABOUT BESTIALITY?

I want to have a discussion about bestiality -- but no one’s talking. People are avoiding me. Why is that? Why is everyone so damn touchy? Well, perhaps because bestiality is illegal; also it’s one of our oldest taboos. There’s also issues around consent and cruelty.

Yes, it’s taboo, but it’s part of our cultural, literary history. Right up to the present day, Erotica writers are telling us ‘changeling’ stories. Lycanthrope stories; stories that are getting as close as you can to bestiality, without it actually being bestiality. I think it’s the publishers who are running scared, not the writers. On the Lust Bites site, Janine Ashbless tells us that the Black Lace editor wails;

“A few years back I wrote a story, The Dragon’s Bride, in which a woman has sex with a dragon. (Have you any idea how hard I’d get my ass kicked if I submitted that story these days?) It was a Big Cock Fantasy really. Some people loved it, and some recoiled from it: “Sex with a talking dragon is still bestiality!” they squealed.”

“Ah, bestiality. I follow guidelines carefully for that. Most pubs won't allow the girl/guy to get it on with an animal. Doesn't matter if both are changelings. They want the couple to be of the same breed. I've had m/m changelings, as beasties screwing. I've probably had other animals too. A pair of cougars, m/f and also m/m/f cougars. I always have them as the same breed. The sex play can start with one as an animal the other human, but before it gets too serious, one changes…I don't think I've ever written what is classically referred to as bestiality. Human/animal sex. It's not saleable to most pubs…”

Is bestiality a fetish? Probably. Is it a perversion? Yes, from where I’m coming from, it is. Is it a fantasy? Most definitely. I think most people, in the broad light of day, would find the act, of a human having sex with an animal, repulsive. But…there’s still those dark, whispered tales. Stories…


So, why are we telling ourselves these stories? Is it a craving for the forbidden? Is the taboo buried deep in our unconscious minds, resurfacing in our stories, fantasies and dreams? The Greek myths tell us real bestiality stories. Humans actually having sex with animals. Those stories are as old as time itself. Those old writers weren’t so timid. Are those guys just telling dirty stories? Or is it something deeper?

In Greek mythology, Zeus, the King of the gods, fell in love with the mortal girl, Leda. He came to her in the form of a swan, and raped her.

You would think that as King of the gods, Zeus could have organised things differently. He could have just made Leda fall in love with him. But the ancient tellers of this story, must have thought it necessary for a human/animal sex scene to take place.

Another Greek myth tells the story of Pasiphae, the wife of King Minos of Crete. King Minos had a beautiful bull, which he was supposed to sacrifice to Poseidon. Instead, the King sacrificed an inferior bull. As punishment, Poseidon made Pasiphae fall in love with the bull. Queen Pasiphae devised a plan so that she could copulate with the bull. She asked the architect, Daedalus, to build her a wooden cow. The cow was hollow, for her to hide in. The bull was brought to her and they mated. From their union, the Minotaur, half man, half bull was conceived.

The myths are beautiful, yet horrible and leave us shuddering; we know that we are being told something forbidden. But the stories will not die, they have been told, over and over again down the generations. The words have been spoken.

In a similar vein, just take a look at European folk tales and fairy stories. Beauty and the Beast. Little Red Ridinghood. The Frog Prince. Are they so innocent? The stories have close, intimate relationships with animals as their theme. We assume that they are stories for children, teaching them ideals such as love, sacrifice and obedience. But I think that the themes are dark and tell us more about our sexuality, our yearning for erotica and our relationship with animals than we care to dwell on.

The stories have been retold many times, perhaps most memorably by Angela Carter. Angela spoke about the story of Cinderella, claiming that the glass slipper, was actually a fur slipper. A mistranslation; fourrure is fur, and verre is glass. She also retold the story of Little Red Ridinghood, as The Company of Wolves.

“All the better to eat you with,” the wolf says to the girl, at the end of the story.

“The girl burst out laughing; she knew she was nobody’s meat. She laughed at him full in the face, she ripped off his shirt…”

I suppose the point that I’m getting to with this is that we know that we are being told these stories. Publishers and editors must think that their readers are stupid. A clever writer will get around the censorship, with a few dark hints. And yes, it is censorship. I expect more from publishers and editors. I don’t like being patronised and I don’t like being told what I can and can’t read. Writers are allowed those dark hints; those highly charged metaphors, as long as they don’t say it like it is.
I don’t know about you, but this annoys the hell out of me. I think it irks Janine Ashbless too.

“One look at Furry communities lets you know how important the symbolic power of the animal-human is. Pony-girls are a favourite fantasy of many people. Cowboy erotica obsesses about horses and sex in stables. And what about the HUGE interest in lycanthropes in romantic fiction? The entire point of werewolf erotica is the fetishising of the fact they can turn into animals at any moment, isn’t it?”


“As soon as she was released this time, Michel rolled her over onto her front. Someone took her from behind, quick and slippery and panting, his balls slapping audibly against her pussy, and after he had finished another mounted her. Her first thought was that this man had an extraordinarily hairy chest and thighs – and then her second thought was a white streak of incredulity., but Michel held her down hard so that she couldn’t wriggle round and look behind her. She buried her face in his leg, half laughing and half sobbing, and pure shock wrenched another orgasm from her.”

Shocking, wasn’t it? You may never recover – though somehow I doubt it.

“Turning back to the male, she took a couple of tentative steps closer, and sniffed at him. Close to swooning from the heady aroma, she stumbled forward and butted her head against his shoulder. Hard muscles met her, his purring increased in volume.
She felt something touch her ear. An ear that seemed somehow jointed as it twitched at the soft caress. Another caress, and then to her wonder, she felt her chest rattle in an answering purr.
The male rose and stretched beside her, his body touching hers unobtrusively. His head was at her shoulder and he faced her rear. She watched his tail flick.
Suddenly, there came a weird wrenching from deep inside her belly. Her vision blurred as pain tore at her stomach. She grunted, felt herself falling, and then suddenly held as pain wrapped its vicious arms around her. Opening her mouth to scream, she was surprised when all that came out was a mewling whimper.
The pain was gone before it was fully realized, and her body shifted. That was the only way she could describe it, a shifting, stretching sensation that frightened her, yet felt right and familiar. Her skin crawled. Searing agony gripped her thighs and she realized they were actually elongating, reshaping into human form. The fur, soft and gorgeous as it was, drew into her skin, absorbed to feed the change. Her shoulder snapped, and for an instant, pain wracked her full force as her upper body realigned itself. The rest came easily. Her hands and feet shifted, reforming to a more recognizable shape. Her face went numb, and she was glad that she couldn't feel those changes as they took place.
Falling to her side, she lay exhausted and panting, while the last few transformations finished themselves; and saw the male beside her.
He too lay stretched out on the grass—on his belly—gasping from his own change. She watched his back rise and fall with his breathing.
For a moment, she thought to flee. Panic—insidious, half-formed—gnawed at her. Who was he? What had just happened? What would Joshua think when he found her missing? Her dreams, nightmares, were real.
A groan from beside her brought her focus back to the here and now. He moved, not much, just tensing his muscles and stretching his arms ahead of himself. Long sleek muscles, gorgeous ass and powerful legs—again she yearned to reach out and stroke him.
She knew it was insane. How could she be so drawn to him—it—she didn't even know what he was, or what she was.
The man groaned and turned over.
Morgan gasped. Joshua lay facing her.
His eyes were closed. He had a soft smile on his face, as though he were dreaming some sweet dream and was unwilling to awaken. And like her, he was naked. His soft pelt had vanished, or was in the process of doing so as she watched. Fur seemed to melt into him. His face, although close to human, was in the last stages of the change. Chin and cheekbones formed, and then it was him—Joshua.”

I don’t want to be ‘allowed’ to read what a publisher thinks I need to read. I’m a grown up. I wish publishers would grow up too. I want stories from great writers like Angela, Janine and Jude. Writers who know their craft and don’t want to be patronised any more than I do.
Posted by billierosie at 08:32