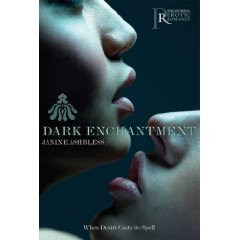 In “Scratch,” Nicholas Scratch comes calling. He’s not a welcome visitor, at least not welcome by Maarten, the owner of the prosperous farm. His wife, Mercy, has told him; “I have a past…” She has made Maarten promise he will not question her about it. He complies, but is bewildered by his wife’s submissive behaviour to their handsome visitor. She kneels at Scratch’s feet; her humility is confusing and Maarten is angered. He is humiliated when Scratch takes Mercy to the marital bedroom, telling Maarten he is going to have sex with her. This is a tale of degradation, buggery and adultery, as Maarten is ordered into Scratch’s game of violation and depravity. Despite himself, Maarten experiences; “a wild sickening arousal…” He succumbs to the Master’s demands. There is never a question of not obeying.

I think that “The Red Thread,” is the best story that Janine has written. It’s a story of love, sex, lust, betrayal and death. It is also wildly erotic. Asterion, is condemned to live for ever in the labyrinth. He is a monster, half man, half bull. His conception is the result of his mother’s depraved copulation with a bull. He is the Minotaur. He is secretly visited in the dark labyrinth, by his wilful young sister, Ariadne. She seduces him into an incestuous relationship with her. Finally she betrays him, and Asterion is killed. This is the first Minotaur story I have read, that shows Asterion in a sympathetic light. In the myth, which has been told, and retold so many times, the Minotaur is a creature to be feared and despised. Janine sent me a link to a story by the Spanish writer, Jorge Luis Borges. Borges too, tells the Minotaur story, from Asterion’s point of view. Both he and Janine, show a depth of compassion to Asterion, which is quite overwhelming.

I must stress though, that it is not necessary to be familiar with, or have read, the ancient Greek myths to appreciate and understand this story. Janine’s story stands on its own. Similarly with another story in the collection; “Ruby Seeds.” It’s an old myth cleverly retold. Alluring, at times scary, and very sexy. This is another story which stood out for me.

In “Darkling I listen,” Janine talks to us about the idea of stories. Stories within stories. A young woman tells a story to a ghoul. Her rhythmic language draws us in to a tale of love and death. Sex and death. A choice of whether to abide in the city of the dead, or the city of the living.

“The Scent of Hawthorn,” tells a story of Knights of Olde. Laying down your life for a cause. Herrick is a big man, a knight, tired and war weary. His final quest is to restore a village, shattered by a rebellious dryad; a tree woman. Herrick tells the broken villagers tales of war and glory. He convinces them, and convinces himself that he will be successful and the village will prosper once more. He leaves for the forest on foot, but he has underestimated his adversary. The dryad has him spread and bound. She tortures him and despite his shame, the knight realises his cock is erect and he suffers the ecstasy, and the final humiliation, of her fucking him. She forbids him to come; he does, and that seals his fate.

From an ancient Minoan civilisation, Janine moves to the paranormal present day. From a past, rich with dryads, knights and deep woodlands, to a prosperous homestead, Janine’s stories are brimming with lust, sex, betrayal, and death, as she skilfully draws out our darkest fears and desires. Janine goes beyond mere fetish, exposing our fatal flaws and secrets. She takes our hidden fantasies, holds up the mirror, and reflects them back to us. We thought we were safe with our little depravities. The stories whisper the unspoken things; the obscenities we nurture, yet deny. Janine’s stories are cathartic and we are compelled to listen.
Posted by billierosie at 06:13