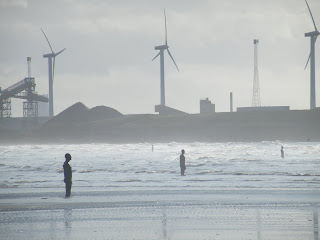 The light was fantastic; tactile, translucent, diaphanous, sublime. The sky huge, giving us an Artist’s horizon of the Albert Dock. Industry and nature. Man’s machines and the natural world. The weather was perfect. The weather woman had told us wind and rain. She was wrong. 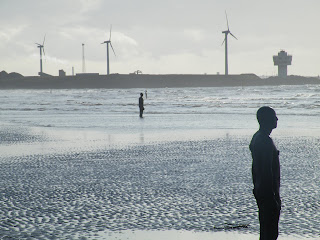 The clouds were strata, high and thin. And it was high tide. 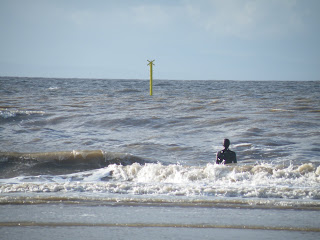 We giggled. Where were the iron men? We’d driven all the way to Liverpool, to see Antony Gormley’s ANOTHER PLACE installation on Crosby Beach, and nature had defeated us. We'd come on a pilgrimage; such a long way. But as King Canute famously discovered; you can’t control the mood of the ocean waves. So we just stood and breathed the cleansing scent of the salty sea air, and watched the crashing waves. 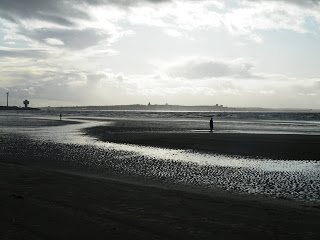 Then, as we watched, the tide turned. Slowly, slowly, before our eyes, the waves receded, revealing a sandy beach. Dylan pointed to what looked like a rock, appearing just above the waves. Is that one? Then I spotted another. We watched for a while, then turned back to the first. A man was emerging, as the tide withdrew. And as the ocean sucked the waves back, more and more iron men appeared.


Antony Gormley constructed the iron men after making a cast of his own body. There’s 100 of the iron men, scattered over the vastness of Crosby Beach. The final men are just uncovered at low tide. They tell you not to walk out to the men farthest away. The ocean is unpredictable, and the tides turn quickly. It would be easy to get cut off. There’s quicksands here too.
Nature is dangerous.It’s impossible to see more than two or three iron men, at any one time. They stand, alone, lonely, just staring out to sea. Blank eyes fixed on the horizon.


First just the heads, then the bodies, then the whole thing. It was like watching primal pagan gods, emerging from the ocean. It gave me the feeling of what it must have been like to be one of the first men. Just looking at the vastness, amazed -- and filled with wonder. As always, in the presence of great Art, of things that are so much bigger than me, I felt tearful. Such a gift Antony Gormley has given us -- just because he can. 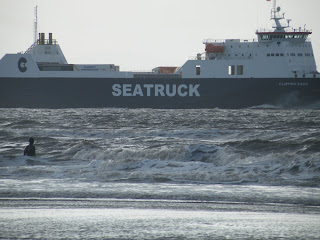 I don’t know what the installation is supposed to mean -- if anything. Some people say it’s a comment on the first men to emigrate. A sense of loss. Of leaving the homeland and staring out across the huge Atlantic Ocean. Daring to leave; not knowing what’s on the other side. To boldly go, (sorry, couldn’t resist).


But it doesn’t matter. It means different things to different people. It doesn’t have to mean anything. The light, the sounds of the ocean, the vast expanse of beach, the skies. For the two of us -- we just felt privileged to look and wonder.