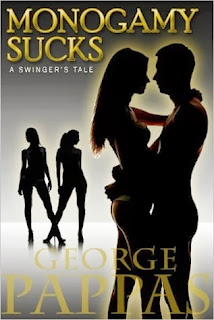 I am so pleased and yes, honoured that George Pappas comes to my blog this week to talk about the Swinging life style and his great novels, “Monogamy Sucks” and “Dear Hef”!

Monogamy sucks for me and I think for a lot of other people too. Every time you turn around there’s another celebrity or politician cheating scandal. I believe this is a microcosm for what is happening in our larger society. I mean studies say there is a 50 percent chance someone will cheat during a marriage and of course we know that 50 percent of marriages fail in this country. So all is not well with monogamy and relationship contrary to popular belief, which is what I explore in my novel Monogamy Sucks.

I don’t think people are realistic about monogamy and its potential limits. I personally don’t think monogamy is natural. It is something that is imposed and encouraged by society and tradition, but it doesn’t work for a lot of us in this modern world so ripe with temptations. So people stray and cheat, and the whole notion of monogamy begins to appear hypocritical.

Open relationships and swinging are not for everyone. You have to keep an open mind and can’t be judgmental. But swinging is much better than cheating. Swingers don’t have to lie about their desires for others. All I ask with my book is for people to consider alternatives, keep an open mind and not judge others.

Swingers are not freaks - -- they come from all walks of life. You probably know a swinger right now and don’t know it.

Swingers fall in love, have families, own houses with picket fences, work day jobs, go on vacations and live the mainstream life except in their bedrooms and sex lives.

This book all started with my own monogamy crisis. When I was in my mid- thirties, I grew dissatisfied with monogamy and conventional relationships. It led me on an interesting journey into the swinging lifestyle. I wanted to write honestly about my experiences and to dispel a lot myths about swinging and swingers in the media, TV and movies. I essentially learned that swingers are like everyone else except in the area of their sex lives.

I started writing my novel Monogamy Sucks in March 1998, however, because of my fears and doubts that anyone would be interested in my story, I kept my novel in my computer for more than 12 years as I worked on many drafts. Early in 2009, I read an article on the Huffington Post about how a number of bestselling books started out first as blogs. So I decided to launch my novel on a blog one chapter a time in May 2010. Several months later, digital publisher Lazy Day Publishing offered me a book deal. I seriously doubt if that would have happened if I hadn’t put my novel out in the blogosphere and tweeted about it on Twitter. I believe Twitter is an essential tool in promoting my book and novels in general as is Facebook, blogs and the Internet overall.

I call my book real life erotica or reality fiction. I hold nothing back. It is like Tucker Max meets Sex and the City -- an unflinching look into the male sexual mind.

My book is frank, funny and shocking at times but above all -- it is painfully honest.

My novel -- really all my novels -- give women intriguing insight into how some men -- more than would admit it -- really think about sex, monogamy and relationships.

The story is told in the form of a fictional diary by my book’s protagonist Jake Dalmas, who is looking for answers to deal with his growing disillusionment with conventional relationships and monogamy.

A few years later, I realized that these sexy, bizarre, funny and even at times inspirational experiences would make an interesting novel.

I knew nothing about the swinging lifestyle before my own personal journey. I was going on myths and misconceptions about this hidden world that still persist today. So I had to research everything about swinging for this novel. To just write about it without participating seems patently dishonest to me and would only perpetuate the myths about swingers that are already out there.

The story is loosely based on my experiences in the swing world, and the stories of others I met along the way, but I want to stress that this is a work of fiction and it’s not non-fiction, a memoir or autobiographical.

I see Jake’s journey as one that has largely gone untold in fiction. There are a lot of books out there honestly documenting the female point of view when it comes to sex and relationships, which I think it a great thing, but there are too few novels detailing the male view on the subject. Furthermore, swinging has not been adequately explored in fiction as it no doubt should be. Contrary to popular perception, there is a lot more interest in swinging among the general public than people might think. Just look at the explosion of porn on the Internet and sex and swinging Web sites.

This is a great time to be a writer. Finally, authors are finding that they have many avenues to pursue their dreams of being a novelist.
Readers and my fellow writers and critics have started to embrace my book and my character’s journey which is reflected in the growing number of impressive reviews on my Amazon page and on the Internet.

As with the rest of the entertainment industry, the Internet will completely transform the publishing business in the coming years. Writers should embrace the immediacy of the Internet as a beneficial means to expose their work and develop their own audiences rather than wait around to be discovered by an agent or publisher. That’s the future of publishing – do it yourself -- whether the publishing industry wants to acknowledge it or not.

The next best selling writer or literary star more than likely will be found on the Internet and not in the usual places such as writer workshops or universities.

Look at Amanda Hocking. She was discovered through her blog and now has prosperous writing career. Stories like hers have been an inspiration for many of us writers.

In my most recent novel entitled DEAR HEF released in September, the dark side of Internet hook ups meets Hugh Hefner and Playboy cool. It is also funny, sexy and explicit in detailing my character’s online adventures and how he e-mails Hef the details (or what he calls his "Playboy Training") as a clueless fan.
I’ve also been invited to write a story for an erotica anthology coming out in October on Lazy Day Publishing entitled "Indulgence." It will have some paranormal elements which will be new territory for me.

In an interview with “The Next Big Thing”, George Pappas was asked what other writers does he compare to within the Erotica genre?

“Each of them bravely and uniquely explored controversial sexual and societal issues in a frank, unsentimental manner exposing truth and hypocrisy alike. I treasure novels that truly take me on a journey and challenge my preconceptions about life.”

An interesting and intriguing essay from George I think you’ll agree. I don’t believe that the mainstream and its conventions take kindly to criticism. It isn’t at all surprising. We’re talking about a hegemony that has propped up the status quo for centuries. Open any book on English critical theory, or the social sciences and you’ll find chapters devoted to hegemony. One definition of hegemony talks about the concept of Imperialism. But hegemony is also about the construct of society; basically how we organise ourselves; how we run things. We are protective about our social order; in terms of monogamy – one man, one woman for life, but as George Pappas so succinctly puts it, “monogamy sucks.” It does for him, and for a lot of other people too. Monogamy has certainly sucked for me and I’ve had to find my own way around its suffocating conventions. Monogamy is there because it always has been, because that’s the way it is. Okay, monogamy is there for good reasons; financial security, emotional security, love, but it increasingly appears that monogamy is not for everyone.

All that George Pappas is asking through his books, is that we consider that there might be another way, and the statistics that he cites in the first paragraph of his essay for failing relationships are persuasive. His books convey a personal politics that is frightening for the mainstream.


The message in George Pappas’ books is revolutionary and in some ways shocking, but I think that his quest rings of integrity and wholeness. Dark forbidden desires…that’s what we are talking about – isn’t it? And as writers and readers of Erotica we delve into the darker side of desire every time we open a book or open our word processor. All swingers do is to act on those desires.


And George is in esteemed company. DH Lawrence first published Lady Chatterly’s Lover in Italy in 1928. It was 1960 before an unexpurgated version could be read here in England after a famous court case where the Crown accused Penguin Books of peddling pornography.

James Joyce, probably one on the most influential writers of the 20th century, famously said that public reception of his work made him feel like an exile in his own country.

And my own writer friend, Jan Vander Laenen is clearly irritated by the way his work is viewed in his own city, Brussels.

“About the Flemings and the gays here, they treat me as if I don't exist anymore although many people begin to recognize me in the streets. Maybe they read me in private and loathe me in public. The literary agent here was afraid of the consequences taking me as a client, the politicians are afraid to help me, and a lot of gays don’t simply accept that I also describe the darker side of the gay world."

“I hope readers will take a chance and read my provocative novel Monogamy Sucks, or Dear Hef and won’t be put off by the controversial content. They really are like no other novels they will have read. However, my books have some relevant and interesting things to say about sex, relationships and monogamy, and is an intriguing exploration of the male sexual mind. I think my novels appeals to both sexes, but it really seems to have struck a chord among women, which was unexpected. Yes, my books are explicit, but I believe the themes are more universal than one might think.”