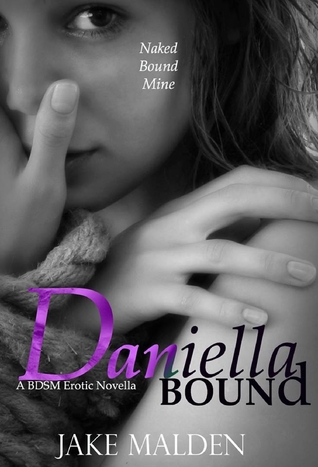 Daniella Bound, by Jake Malden, is probably the hottest piece of erotica you’ll read this year. Through Jake Malden’s protagonists, Eric and Daniella, the reader is taken on a silkily smooth sexual journey worthy of the Marquis de Sade, or Leopold von Sascher-Masoch’s 1870 classic, Venus in Furs.


Each sentence, each word is calculated to arouse – and I’m not just talking about sexual positioning, although there is plenty of that; I’m talking about appeals to the senses; about feeling and feelings. Taste, scent, touch, skin on skin and how these are heightened when sight and hearing are taken away.


“For Daniella all was darkness. The sleep mask he had slipped over her eyes encased her in velvet black. Every other sense was heightened…”

“The soft whirring of the fan and rustle of his clothing, as he crossed his legs perhaps, or shifted in his seat. The scent of honeysuckle through the open window and the sharp tang of cologne whenever he drew close. The prickle of cooling sweat on her exposed skin every time the fanned air brushed her. And the tautness of knotted bonds around both her wrists and her ankles. Hell, she almost felt his eyes on her. They were patrolling her body for sure, calm and alert. Enjoying her. Consuming her.”


And as I read, I am aroused; Jake Malden’s writing not only arouses me, his characters demand to be heard and immediately, my senses sit up and take notice. We hear a lot about the immediacy of pornography; the method of the pornographer is to put it there, right in your face, hitting you before you’ve had the time to control your arousal or repugnance. And that is exactly the effect; the sort of immediacy, that Jake Malden’s phrases have on me. So, am I reading erotica or pornography? Daniella Bound might have the immediate, sharp sting of pornography; but to me, it has the mellifluous drip, drip of highly sophisticated erotica.


Pornography doesn’t have characters with psychological depth, erotica does; at least in the hands of Jake Malden it does. He’s an intuitive writer. Daniella and Eric are fully rounded, psychologically savvy characters; we know them and recognise aspects of them in ourselves, our family, our friends.


The paragraph quoted above opens the novel; Daniella’s arousal speaks to the reader. Some readers will yearn to feel what Daniella is feeling; the lucky reader will be thinking ‘yes, I have felt that too…’

And Eric too; his control over Daniella, brings unexpected dark, deviant thrills. There will be plenty of Jake Malden’s readers wanting to try out a bit of bondage after reading about Eric and Daniella.


The tale unfolds in a third person narrative with an alternating point of view; and as each point of view emerges, the reader is privy to the particular character’s thoughts, intent and intensely, overwhelming sexual arousal and release.

In the hands of a less skilled writer, the changes in point of view could damage the reader’s trust in the writer. A reader wants to know fairly quickly, that this is a story that will be worth investing time, patience; and, of course a certain amount of money. The publishing industry probably has more erotica themed novels in its databases than ever before; erotica is highly competitive.

Jake Malden handles the changes in point of view seamlessly; the reader quickly connects with where the novel is going; all that is left to do, is relax and enjoy the sexy antics of Eric and Daniella.


Reading this through, it is probably more of a commentary and analysis than a review; a review is there to make you want to upload the book. So I’ll start as I began; Daniella Bound by Jake Malden is probably the hottest piece of erotica you’ll read this year!