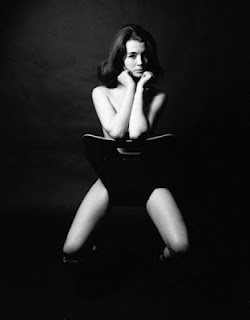 
It was the scandal of the decade, if not of the twentieth century. The year was 1963, an austere time in England. We were still recovering from the devastation we had suffered during WWII. Rationing had only ended in the late 1950's. It was the height of the Cold War, when spying was rife and the threat of war was imminent, with the outbreak of the Cuban Missile Crisis.

And fear of spies was a reality. Britain was reeling from the revelations that Guy Burgess and Donald Maclean were Soviet spies. There was sexual intrigue involving men high in the social scale. A Minister of the Crown; an eminent Harley Street doctor. Sex and lies from those very men that we looked up to. The idea that a British politician was not only cheating on his wife with a call girl and  sharing the call girl with a Soviet diplomat, sent the public reeling. 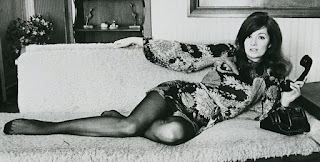 This scandal of sex and betrayal saw the resignation of one Cabinet Minister, the retirement of a Prime Minister and I don’t think I am exaggerating, when I say that the scandal eventually caused the downfall of a government.

The 1960’s was the decade that the publisher Penguin was prosecuted for publishing D.H. Lawrence's racy novel Lady Chatterley's Lover. Penguin won the case and was able to publish 200,000 copies as people raced to get their hands on it. The old order was being challenged and a new order was just beginning. The children born just before and during the war were coming of age. The Beatles still had mop haircuts and had just released “I Wanna Hold Your Hand”, Ian Fleming's spy novels had hit the screen starring the very sexy Sean Connery as 007. The newest actors in Britain were not Hollywoodized versions of British men, but actors like Albert Finney and Michael Caine who were working class. 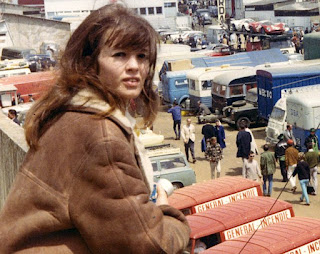 New magazines like “Private Eye” which poked fun at everyone and everything was established. Beyond the Fringe starring Peter Cook, Alan Bennett, Dudley Moore and Jonathan Miller hit the West End. And David Frost became a national celebrity hosting the hit TV show That Was the Week that Was (a more topical version of VH-1's Best Week Ever).

Yet for all the changes, Britain was stuck in the 1950's. This was still the era when unmarried girls who found themselves pregnant, were packed off to places where they could have their babies in secret and then give them up for adoption. 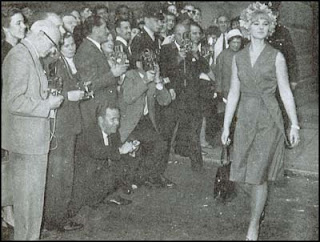 And politically things were not good. Although Harold Macmillan had swept into office in 1959 with a majority in the House of Commons, there was discontent in the country. While Japan and Germany had recovered nicely from the war, the economy in Britain was stagnant. There was inflation and labour unrest. Unlike America, with its young, vibrant president, Irish-Catholic, war-hero with a beautiful young wife, and two adorable children, it seemed that politicians in office reflected a by-gone era, the era of Churchill and Lloyd-George, old school politicians.

So at the height of the cold war in the early 60s, as the established order was challenged as never before, Britons paid rapt attention to a sordid little affair which involved a cabinet minister, a showgirl and a Soviet naval attaché.  It was an era in which anything was possible and nothing was safe; a time when the established order was being challenged, subverted, and ultimately buried. 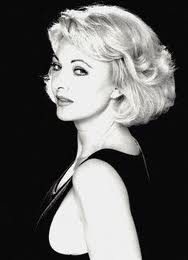 Even today, in our peculiar society, we get excited when ministers and other public figures are caught with their pants down. In 1963, the very notion was deeply, deliciously shocking.

It was still mostly a pre-pill, pre-promiscuity age, when unmarried pregnancy was a matter of deep family shame, and back street abortionists thrived. The tabloid newspapers were already brash but not yet sex-crazed, and were by and large polite to politicians. But when the storm broke, it was not simply driven by sex; there was a deep, dark context of rank treachery. 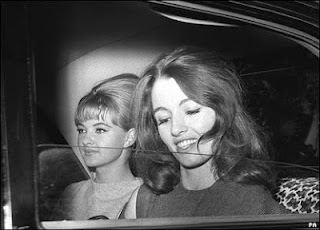 The chief players in the unfolding drama were;

John Profumo - Secretary of State for War, married to the actress Valerie Hobson.
Harold Macmillan aka Supermac - Prime Minister of Great Britain and Northern Ireland
Christine Keeler - goodtime girl and model
Mandy Rice-Davies - fellow goodtime girl and model
Stephen Ward - osteopath and panderer
Lord Astor - A member of an old, respected, aristocratic family. He was the owner of Cliveden, a large country house where sexual intrigues took place.
For months, rumours had circulated about the private life of John Dennis Profumo, secretary of state for war. Educated at Harrow and Oxford, he was a quintessential high Tory who had achieved cabinet rank after serving in a number of junior posts. He and his wife moved effortlessly in the crème of society.

In the deferential spirit of the 1950s, the rumours may have been restricted to salon gossip. Now, in the new age of iconoclasm, the whispers were amplified in the media. “That Was The Week That Was” scored a telling blow with a splendid parody of the old music hall number, “She was Poor but she was Honest”. The words of the new version went: "See him in the House of Commons / Making laws to put the blame / While the object of his passion / Walks the streets to hide her shame."

The "object of his passion" was a young woman whose name is now embedded in British political folklore: the incredibly beautiful Christine Keeler.

Christine Keeler, unlike Profumo, had had an extremely undistinguished life. Born in 1942, she left home at 16 after an unhappy childhood in the Thames Valley, and gravitated to London where she found work of a sort at Murray's cabaret club. There she met and befriended another showgirl, Marilyn "Mandy" Rice-Davies. Soon, both young women had drifted into the racy circle around Stephen Ward, a fashionable West End osteopath and socialite.

Christine’s  relationship with Stephen Ward was both torrid and rocky. They broke up several times, but he seemed to exercise an almost mesmeric influence on her, and always she drifted back. Soon both young women were celebrated players, albeit with bit parts, in Ward's sexual circus.

Not all the action was centred on Ward's Wimpole Mews flat, equipped with two-way mirrors and other aids to lubricity. Soon, Christine Keeler and Mandy Rice-Davies were circulating in more exalted milieux, including Lord Astor's country mansion of Cliveden. It was there that John Profumo first laid eyes on her. A brief but passionate affair ensued, and tongues began to wag.

Even then, it might have been brushed under the carpet in the time honoured English way, but Profumo made a fundamental error: he lied to the House of Commons. In March 1963 he told the chamber that there was "no impropriety whatever" in his relationship with Christine Keeler. Ten weeks later he appeared before MPs again to say "with deep remorse" that he had misled the House, and would resign.

What brought Profumo down even more than his deceit of the Commons, was the startling revelation that Christine Keeler had also slept with Eugene Ivanov, the naval attaché at the Soviet embassy. It was that detail which captured world attention, notably in the United States, where the FBI compiled a detailed report called Operation Bowtie.

In Britain, Profumo's downfall naturally caused a huge sensation, inflated by the establishment's crude and cruel attempts to find scapegoats for its own embarrassment. As usual, official wrath was turned on those least able to defend themselves. Stephen Ward was prosecuted for living on immoral earnings. On the last day of his trial, he killed himself with an overdose of sleeping tablets.

In his suicide note Stephen Ward wrote; “I feel the day is lost. The ritual sacrifice is demanded, and I cannot face it. I’m sorry to disappoint the vultures”.

Some people think that Stephen Ward’s death is a little too convenient. They believe that he was murdered.

Christine Keeler was also tried and imprisoned on related charges. Mandy Rice-Davies, who escaped prosecution, earned a dubious immortality when, during the Ward trial, she was told that Lord Astor disputed her version of events and replied: "He would, wouldn't he?"

Less than two months after Ward's tragic and mysterious death, an official report was produced by Lord Denning, master of the rolls. It was a hot number: hundreds queued to buy a copy when it was released at midnight. But there were few juicy bits in Denning's findings. He criticised the government for failing to deal with the affair more quickly, but concluded that national security had not been compromised. And, to the dismay of the reading public, he failed to identify the man who, naked except for a mask, had served at Ward's dinner parties. There had been rumours that the "man in a mask" was a cabinet minister but Denning, who interviewed him, denied it.

There it ended, though it never really went away. The 1989 movie, Scandal  reignited some of the controversy, and Christine Keeler raked over the embers in her autobiography, “The Truth At Last”, published early in 2001. In it, she revived some of the more startling claims made at the time - though alas she was unable to offer convincing new evidence to back them up.

John Profumo died in 2006. Christine Keeler is now age 70. After her prison term, she
repeatedly tried to restart her life, but the scandal continued to hang over her head like a sword of Damocles. She married and divorced twice, and has two sons. Over the years, she's held various jobs as a receptionist, and as a dinner lady in a school in London, all under an assumed name.

Mandy Rice-Davies traded on the notoriety the trial brought her, comparing herself to Nelson's mistress, Lady Hamilton. She married an Israeli businessman, Rafi Shauli, and went on to open a string of successful nightclubs and restaurants in Tel Aviv. The restaurants and nightclubs, which bore her name, were called: Mandy's, “Mandy's Candies” and “Mandy's Singing Bamboo”. Mandy Rice-Davies also parlayed her minor fame into a series of unsuccessful pop singles for the Ember label in the mid-'60s, including “Close Your Eyes” and “You Got What It Takes”. I am sure that I have seen her on television too.

Few attended poor Stephen Ward’s little funeral on that day in August, but a number of leading figures such as the writers  Kenneth Tynan and John Osborne clubbed together to send a wreath of a hundred white carnations bearing the message 'To Stephen Ward, Victim of Hypocrisy'.

This post was prepared using sources including Wikipedia and Derek Brown - 1963: The Profumo Scandal And from what I recall listening to my parent’s conversations about the case. A few years later, when I was 16, I wanted to go to London to train as a fashion model. My father would not let me go, citing Stephen Ward, Mandy Rice-Davies and Christine Keeler as his reasons.
Posted by billierosie at 04:19