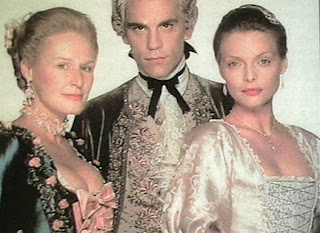 I have just finished reading the most incredible book. “Les Liaisons Dangereuses” by Choderlos De Laclos. I am usually reluctant to go overboard on superlatives -- but this book is truly amazing. It really is an absolute must for any lover of erotica; whether writer or reader.


Wealthy, devious and bored, the Vicomte de Valmont and Marquise de Merteuil have formed an alliance and begin a dangerous game of seduction and domination. Eager to preserve their reputations, Valmont as a libertine and Merteuil as a virtuous lady they act out their roles with passion and vigour. Together they plot the downfall of the naive Cécile Volanges, the love struck Chevalier Danceny and the pious Madame de Tourvel.


The Vicomte de Valmont and the Marquise de Merteuil are two wealthy, aristocratic individuals, who take pleasure in showing their power over their lovers, and who choose cruelty and deceit over the integrity of true love. Valmont, a suave, sophisticated and charming man, aims to seduce the virtuous Madame de Tourvel, the wife of a prominent judge. His goal is not to shake her foundations of religious faith, but to use that faith, and her own virtues, to ensnare her and ensure her destruction. Merteuil, on the other hand, seeks revenge against the Comte de Gercourt, and devises a plan to corrupt his soon to be young wife, Cécile Volanges.


Through these letters, a world of corruption, deceit, betrayal and immorality unfolds.


The letters between Valmont and the Marquise drive the plot, with those of other characters serving as illustrations to give the story its depth.


If it were written today, we would probably be talking about psychological terrorism, as we see the Marquise de Merteuil and the Vicomte de Valmont, sadistically control and dominate those around them through sexual intrigue. The two are locked in psychological combat to see who can actually better the other in stalking, capturing and destroying the psyche of others. Taking absolute pleasure in ripping any virtue from the hearts of their prey, Merteuil and Valmont wave their accomplishments in front of each other like the spoils of war. The less the chance of surrender, the more relentless is the pursuit.


But where is Choderlos De Laclos, the author in all of this? Written as a series of letters between these main characters, the author seems to imply that these are real people. The identity of various individuals and places, as well as the year the events take place in are obscured. Or is this just a device to convince the reader of the letters’ authenticity? Since its publication in 1782 the book has always been marketed as a novel. What exactly is it? Is there a novel, or a primary, historical source simmering beneath the surface of the letters?


“We feel in duty bound to warn our readers, that despite the title and the editor’s comments in his preface. We cannot guarantee the authenticity of these letters. We even have strong reasons to suspect that this is a work of pure fiction.” (publishers’ foreword)


In  contrast to the publisher’s note, the editor’s preface insists on the letters’ veracity. The letters are genuine. The editor defines his role as one of selecting the most significant correspondence, arranging them, and adding “a few brief and sparsely scattered notes, which, for the most part, have no other object than that of indicating the sources of quotations, or of explaining the abridgements I have permitted myself to make” (editor’s preface)


As with the publisher’s foreword, the editor’s preface has the opposite effect of its explicit intent. Rather than convincing the reader that the editor’s role was minimal, we are made aware of just how much goes into the act of editing; and as we will see the editor steps in at the climax of the novel.


“If “Les Liaisons dangereuses” wears the smile of the Mona Lisa, that smile was put there by Laclos. The ambiguity begins even before events start to unfold. The ‘Editor’s Preface’ states that the correspondence we are about to read is authentic and makes the standard eighteenth century case for moral usefulness. Yet the ‘Publisher’s Foreword’ denies both claims: what we are about to read is a novel which is unlikely to produce any moral effect whatsoever. Both were written by Laclos, and both are heavily ironic. By the time the first letter reaches us, the author has locked himself inside his stoutly defended novel and never reappears. How then, should we read “Les Liaison’s dangereuses?”
(From David Coward’s introduction to Oxford World’s Classics edition.)


Should we read it within its historical context. Look at it in terms of the corrupt society of the last days of the “ancien regime”? The French revolution is but nine years away and the terror of the guillotine. If we read it from the stance of its historical context, we can assess it through the concepts of specific literary and philosophical traditions. Should we give it a Freudian reading? Is it a case for Marxists and Feminists?


“A range of answers is now available but they have not, either singly or collectively, quite succeeded in wiping that enigmatic smile from Laclos’ face.

“To begin with, the possibility that Laclos was not a novelist at all but the ‘editor’ of a genuine correspondence has never quite been laid to rest. Models for his characters have been suggested, never convincingly, but hope is now fading that a secret family archive in Savoy will one day disgorge the original letters.”
From David Coward’s introduction.


Les Liaison dangereuses is the height of metafictionality, making the reader aware of how artifice is used to give authenticity to fiction, how fiction is employed to find truth in lies. Laclos borrowed the epistolary method from Richardson and Defoe, but he improved upon it, giving the letters distinct voice, style and quality. The letters seem to be written by different people, yet Laclos draws our attention again and again to how this was accomplished. The genius of the work is that we are fooled, in spite of all the warnings, as we are always fooled by well-written fiction.


Earlier, I asked the question ‘how should we read “Les Liaisons dangereuses”? One minute I think that it is fiction; fiction at its most supreme. The next minute I think the converse; the letters have a ring of truth. But isn’t that what great writing is supposed to do? We are left wondering.


We have always been fascinated by celebrities behaving badly. In “Les Liaisons dangereuses” we see not only the bad behaviour, but the way in which people with less power are used and discarded as collateral damage without so much as a thought. Our curiosity about the lives of the rich and famous is mirrored in modern society today, by popular obsession with the decadence of royalty and film stars.


These days we don’t have Laclos, we have OK and Hello magazines to keep us informed of the decadency of high society.


Christopher Hampton adapted “Les Liaisons dangereuses for the stage”. He leaves the audience with a terse reminder. In the closing moments of the play, the shadow of the guillotine falls across the stage. It is the end of the ancien regime.


My thanks to my sweet friend Jan Vander Laenen for opening my eyes and my mind to this great novel.
Posted by billierosie at 04:18