MEMOIRS OF A SEX SLAVE: THE CONFESSIONS OF A SUBMISSIVE WOMAN. 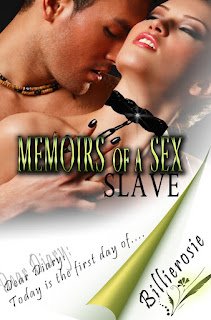 I am quivering with anticipation! Trembling with excitement! Today, my novella, “Memoirs of a Sex Slave: The Confessions of a Submissive Woman”, comes out, published by wonderful Sizzler!

Here is what Sizzler says about my book.

Elektra has led a full, and exciting life. She is happy and though some of her memories cause her to blush, she relishes her life and would not change anything. In these later years her one regret, is that the Master that she adored, passed away leaving her lonely and alone.

Here is a taster of Elektra’s tale!
“…the feeling of being filled in her rectum thrilled her with its very indecency; she wanted more. As if in a psychic response, the stranger pushed in another finger; she was tight, but his persistence and the lubricant did their work. Then a third finger. She wanted him to rape her anus, defile her, right there in the middle of the club with everyone looking on.
Slowly he masturbated her rectum; pushing in, retreating, going further in with each push. Her pelvis pushed back on him. It was her body's reaction to the strange new sensation. She was helpless; her body's needs dictated the rules. She felt the flat palm of his hand on her buttocks. He was all the way in. Her rectum muscles gripped him tightly. He moved his fingers in a circular motion, stretching her as if in preparation for a man's thick cock. Elektra trembled as he finger fucked her dirt hole. When he slowly slid his fingers from her, she felt bereft, empty and tears trickled down her cheeks. He moved around to face her and she watched him examine his fingers. She had emptied her bowels earlier in the day, but still his fingers were streaked with her dark excrement. His hooded eyes watched her face, as he held his fingers to her mouth, a silent order for her to lick them clean. Elektra lapped obediently. She could taste the lube that he'd used and something dark and forbidden. The taste excited her and she slobbered over his fingers. A tremor of shameful disgust shuddered through her body like an electric shock; what was she becoming?

Or had this always been her truth, it was just that the doors, until now had been kept closed? Her head reeled with dark, indecent, ancient taboos.”

Thank you so much, Jean Marie and Chris, for your encouragement and for taking a chance on me!
“Memoirs of a Sex Slave; The Confessions of a Submissive Woman” is at Sizzler and will be available at Amazon very soon.
Posted by billierosie at 04:50