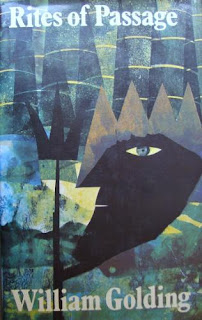 William Golding’s Rites of Passage makes for a strange, haunting read. A ship bound for the New World, sometime in the 19th century. Witty observations, as the narrator weaves his journal. A self conscious narrator -- he wants to impress his reader.

But then something happens. A violation so horrible that the narrator can scarcely put it into words. Shame, is perhaps the word to sum up this crime of violating the innocent.

It's about culpability too -- we are none of us innocent, it's a question of how guilty.

As with William Golding’s "Lord of the Flies" the action takes place in isolation -- far away from the bigger picture of society. The ship is a microcosm, a world within a world. The narrator and his fellow travellers try to keep to the rules that they know. The sensible rules, the ages old English rules, the rules that work -- but out on the creaking ship, on the vast ocean, something primal, something feral stirs.

Yes, it is possible to "die of shame."

We are at the beginning of the 19th century. The Napoleonic wars are coming to an end and young Edmund has joined a heterogeneous crowd of émigrés on board an old decommissioned warship, for a long voyage to Australia where he is to become an important man in the administration.

The early narrative takes the form of a journal that Edmund Talbot keeps on the way to Australia – ostensibly to amuse and inform his godfather back in England. He fills his description of life on an old warship at the end of the Napoleonic era with witty observations on the bad manners of his fellow passengers, salacious gossip and details of his own sexual encounters. It's light, frothy and – apparently – pleasantly superficial.

“The place: on board the ship at last. The year: you know it. The date ? Surely what matters is that it is the first day of my passage to the other side of the world…”

As the narrative unfolds, Edmund’s disdain for others, throws a light on the old class prejudices that still loiter today. The ship's community indulges it's boredom and thirst for a victim, and endorsed by the captain's own prejudices, finds its soft target in a Chaplin.

True to Edmund’s character, and the nature of his undertaking, the journal reads as if it has been written in haste. So it's no surprise to learn that Golding wrote the first draft of the book in just one month. It reflects Golding’s genius to be able to recreate such convincing early 19th-century prose so fast and with such elegance. A talent that takes on almost eerie transcendence; Golding said that he simply transcribed conversations he was hearing in his head to create the novel's fluid dialogue.

Yet this easy reading should not be mistaken for levity. Golding insisted in interviews that this book was "funny" and proved that he wasn't the "dreary old monster" he was often made out to be. But he was being disingenuous. For all of its humour, “Rites of Passage” turns into a most disturbing book.

It would be easy to mistake the first 50 or so pages of Rites of Passage for a straightforward social comedy.

The comedy relates to one Reverend Colley, who gradually begins to dominate Edmund’s narrative. Initially, Edmund invites his reader to laugh at Colley – and it's hard not to. He is – as Edmund paints him – an absurd, obsequious man, ridiculous in his parson's clothing, his hacked-about haircut, his daft wig and his fawning over "gentlemen".

“turning to ascend the ladder to the afterdeck, but seeing me between my young friends, and perceiving me to be of some consequence I suppose, he paused and favoured me with a reverence. Observe I do not call it a bow or greeting. It was a sinuous deflection of the whole body, topped by a smile which was tempered by pallor and servility as his reverence was tempered by an uncertainty as to the movements of our vessel.”


Edmund’s comedic description of the parson discomforts us with Edmund’s only too very English snobbery. It is tinted with a sneer. And much as we join in the laughter at the ridiculous Colley, we view Edmund with suspicion. We “know” his sort; Edmund is very much like ourselves.

For Edmund, everything is an inconvenience; everything that is, which disturbs his comfort. For the Reverend Colley, everything is a wonder. The mighty ship, the sudden clemency of the weather -- he sees the beauty of creation. We learn this, when Edmund reads Reverend Colley’s own journal. How two men, can view the same vista so differently.

The sailors and émigrés get Colley horribly drunk -- it is unlikely that he has ever been drunk before, and Edmund’s description of him, attempting to bless the passengers, while singing “joy, joy, joy” is very funny. It is the last time in the book, that Golding permits us to smile.

Colley dies of shame – starving himself after he remembers another, as yet mysterious, act he performed in his cups. The horrible feeling arises that we as readers have been complicit in his bullying and degradation.

Golding turns the screw tighter, when he introduces Colley's letter to his sister, which is, in a way, Colley’s own journal. Edmund’s coxcomb gone wrong, is transformed into a sympathetic, sweet-natured man who is terrified at smearing the dignity of his office by wearing the wrong outfit and whose wild haircut is explained by the fact that his sister tried to cut it one last time before he boarded ship and they parted, but was crying so much that she could hardly see what she was doing.

Every laugh we've had at Colley's expense turns to ashes in our mouths, every indignity he suffered seems barbarous.

The narrative turnaround is a wonderful display of writing skill, as Golding shows that Colley suffered many other cruelties that Edmund failed to observe – or ignored. The revelation of the details of the mysterious act that so mortified Colley are vague to the reader – but by this late stage Golding has done enough to overwhelm us completely.

The reader recalls Edmund’s observations of Captain Anderson. The Captain has a pathological hatred of the clergy believing himself to have been robbed out of his inheritance by one.

Because he enrages the Captain, who likes passengers never to come near him, the naval warrior decides to exert his power over the crew by picking on the parson.

With the Captain’s blessing, the parson becomes an open target for abuse, and things come to a head when he appears ramshackled and drunk on the deck and is led away to his cabin in disgrace, after urinating in front of the shocked ladies. No one can tempt him out to talk. Slowly he withers away refusing food and drink and dies on an evening when the captain has ironically invited some guests, including Edmund into his cabin for dinner.

The Captain is forced to thaw because of the announcement by Edmund of his journal, which will be sent to his godfather, with the implied threat that the bullying will be revealed to a wider audience. The Captain calls for agreement that Colley died from a low fever and Edmund is forced to go along with that conclusion.

The only one who could have saved the parson is Captain Anderson. But his hatred of the robe in general and Colley in particular, sets an example to officers and crew alike and the reverend becomes a target for abuse. The Captain has the social status to reverse the flow of things but does not assume the responsibility which goes with it.

The letter/journal is replicated by Edmund in his journal; it is offered by way of an explanation. It is also offered as an act of contrition.

“And I? I might have saved him had I thought less of my own consequence and less of the danger of being bored!”


The reader quickly understands the reason that Colley’s fellow passengers keep a distance from him. His profession as a clergyman marks him out as different; so does his sensitivity. Colley writes about the sailors manning the mighty ship. He writes in beautiful, homoerotic language. He sees the sailors as beautiful.

“They go about their tasks, their bronzed and manly forms unclothed to the waist, their abundant locks gathered in a queue, their nether garments closely fitted but flared about the ankles like the nostrils of a stallion. They disport themselves casually a hundred feet up in the air…”


Colley is a voyeur. He takes pleasure in gazing at the male form.

In a later passage in the journal, Colley tells the reader of how he entered Edmund’s room, while Edmund is ill and sleeping. He sees Edmund as a Christ like image.

“The young man lay asleep, a week’s beard on his lips and chin and cheeks - I scarce put down here the impression his slumbering countenance made on me - it was as the face of the ONE who suffered for us all - and as I bent over him in some irresistible compulsion I do not deceive myself but there was the sweet aroma of holiness itself on his breath! I did not think myself worthy of his lips but pressed my own reverently on the one hand that lay outside the coverlet. Such is the power of goodness that I withdrew as from an alter!”


The letter which ends at the Parson’s death is followed by an interrogation, a cursory inquest, with which the reader tries, unsuccessfully, to fill in the blanks in the understanding of what has happened. They prevaricate when questioning Billy Rogers, one of the suspected perpetrators. They use innuendo.

“Come Rogers. You were the one man we saw with him. In default of any other evidence your name must head the list of suspects. What did you sailors do?”


Rogers response is: “What did WE do, my lord?”


At last, now we know. But is this enough for a man to will himself to die?

The interrogation is promptly closed, when the enquiry unexpectedly risks implicating some officers.

So now we know the whole story?

Not quite. Mr Prettiman relates a conversation that he had with Billy Rogers.
“…he’d knowed most things in his time but he had never thought to get a chew off a parson!”

“Rites of Passage” was first published in 1980. It is a moral parable, and is the first of a trilogy. It’s about atonement and sins that can never be forgiven; only lived with.
William Golding won the Booker prize in 1980. In 1983 he was awarded the Nobel prize for Literature.
Posted by billierosie at 03:28