Men -- Beware The Wife of Bath! 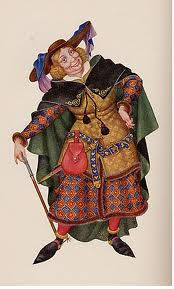 Usually, I look to the Greek myths, when I’m searching around for an archetype. Certainly, the myths have their share of strong women, women who really were downright superior to men. The terrifying Medusa, who could turn men, and anyone else for that matter, into stone. Athene threw her weight about a bit and Circe simply turned men into swine -- while Medea took revenge to its absolute bloody limit, by killing the kids.

The Bible too, has its share of strong women, some of them quite terrifying. Delilah, Esther, Jezebel. And the quietly strong ones, Ruth and Mary.

But as far as I can see, there is no woman before Alyson, the Wife of Bath, who made training the men in her life into an art form.

In his incredible essay on “The Wife of Bath’s Prologue and Tale,” which you can read here, Ian Mackean demonstrates how Alyson has achieved her aims. She is duplicitous, greedy, sexual, yes, she loves sex, but above anything else, she loves to be in charge. She is moody and she has a temper, but she’s smart, sharp and funny too. The tale that she tells ends up being a lot shorter than her prologue; it is in her prologue that we learn about Alyson as a fully rounded, three dimensional character.

I think that Chaucer was the first writer to do this, to create characters as real people. By the end of Alyson’s tyrannical diatribe, where she challenges men in general, and God and the Bible in particular, well, we could argue with her, or cheer her on.

The Wife’s appearance is startling. In his introduction to the Wife’s prologue, James Winny tells us;
“In her brazen red stockings, her vast hat and wimple, she conforms with the standards of medieval life; noisy, assertive and robust. Her ruddy complexion, her deafness and her widely spaced teeth give her an emphatic personality such as few of the pilgrims can rival…she bursts upon the pilgrimage with the unexpectedness of a bomb, to introduce herself and a group of three connected tales.”


Alyson, the Wife of Bath, is de rigueur for the fourteenth century. These days, she would be dressed in black leather, cracking a whip and wearing killer heels. She’d probably be wearing sharply spiked spurs and have a pair of handcuffs jangling from her studded leather belt, which she wears cinched in tight at the waist.

She should have a government health warning tattooed on her wide forehead.

“Warning to men. Consort with the Wife of Bath at your own risk!
Posted by billierosie at 03:14