“Fantastically deranged at all times, Darren Aronofsky's ballet psycho-melodrama is a glittering, crackling, outrageously pickable scab of a film.” 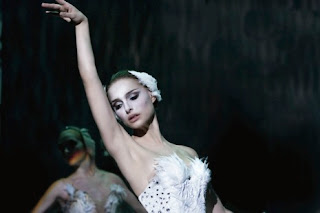 Nina Sayers is a young ballerina. Played by Natalie Portman, she is ethereal, stunningly beautiful, fragile, vulnerable, inexperienced, naïve and just slightly psychotic. She is also fearful. Fearful of her own body and fearful of letting go. She has to let go; if she is to dance the role that she, and other ballerinas dream of, she must strip away the façade, break down the wall she has erected around herself and dig deep into her psyche. She has to find the raw sexual urgency to dance the counterpart of the white swan. She has to become the black swan.

Nina is in a perpetual state of anxiety; she hallucinates; she fears that her reflection in the mirror continues to stare at her, after she has turned away. She is teetering on the edge of mental collapse. Real screaming madness isn’t far away. Her art is her life, as she strives to perfect her dance. Yet her mind and body seem to be in collaboration against her. She has an ugly skin irritation on her shoulder, brought about by unconscious self harming. The skin irritation is a physical manifestation of the state of her mind.

The sharp images of the phallus in the “Black Swan” emphasise Nina’s fear of penetration. These images are shown in shards of broken glass, and a dangerous nail file. Then there is the overwhelmingly male svengali figure, Thomas Leroy, played by Vincent Cassel, the director of the ballet company. He also signifies the phallus. Nina fears his charisma, his maleness, she is drawn to him, she fears being supplanted in his affections.

Rehearsals progress; the need for perfection is intoxicating; but still she cannot access the darker, sensual side of her psyche. She has to release herself. She has to possess the virginal grace of the White Swan, but also the elemental passion of the Black Swan.
Nina, Thomas Leroy believes, lacks the latter; she is too poised, too much in control.

Thomas Leroy tells her, to go home and touch herself.

Her fears of sensual experience, are compounded by her toxic relationship with her mother, played by Barbara Hershey. Nina’s mother has done her utmost to keep her daughter a little girl. Nina’s bedroom is girlish, it is overwhelmingly pink; filled with stuffed toys and a music box that plays the theme from Swan Lake.

Nina’s visual hallucinations are expressed through the many mirrors of the dance studio. Her image is constantly thrown back to herself and the viewer.  Her anxieties about whether she’s good enough; her growing paranoia that another dancer, the more naturally expressive Lily (Mila Kunis), is plotting to take her role. The borderline-schizophrenia is induced by the doubleness of her character; soon she’s not so much untethered as unhinged. The viewer shares Nina’s jittering anxiety.

I wanted to enjoy “Black Swan”, but I did find it rather predictable. From the beginning of the film, the viewer recognises Nina as a troubled personality. Nina sees her doppelgänger, she self mutilates. The pressures on her are intense as she tries to please her controlling mother and strives to satisfy her demanding director. Her move towards complete mental breakdown is inevitable; the viewer sees this and knows that the eventual outcome will be tragic.

“Freud said that meeting one’s doppelgänger in life or in dreams produces sensations of the uncanny, but isn’t one double enough? This movie has three sets: there’s also the washed-up ballerina (played, in a cruel bit of casting, by Winona Ryder) who previously danced the role, and whom Nina tries to emulate, as well as replace. Actually, there are four, if you count Nina’s mother, with whom Nina shares a clammily intimate relationship and the same pulled-back hair and clenched manner.”
David Denby writing in “The New Yorker”. December 6th 2010


In a way though, the film irritated me; I felt manipulated by the rather obvious Freudian perspectives. For example -- sharp pointy thing equals phallus, and fear of penetration. The ugly irritation on Nina’s shoulder is paradoxically placed from where a swan’s wing would sprout. The film is an exercise in psychoanalytical theory; it’s almost as if the writers got together, read Freud and Jung, then wrote the film around their ideas. It’s textbook, the classical players are all here; the overbearing, Superego of a mother, the fragile, repressed Ego hero, the free-spirited Id. The Bad Mother, the Hero, the Shadow, the Father.

And for that reason, I found the film contrived. As I said, I wanted to enjoy “Black Swan”, but in cluttering up the film with Freud and Jung, I think that the director muddled a good story. And of course, the original story of “Swan Lake” lends itself to a psychoanalytical reading, all stories do. I just felt irritated with psychoanalysis being force fed to me.

I hate to give any work of art a bad review -- marring someone’s little bit of creativity. It’s a shame I felt overwhelmed by psychoanalysis, because “Black Swan” is still a beautiful film. The dancers have that austere elegance that leaves me breathless. The film’s striking design, makeup and costume, command the attention and Tchaikovsky’s music keeps the viewer in a state of rapt awe. Darren Aronofsky’s  direction is sharp and precise. It re-tells an old, old story… It’s just a pity that he let Freud and Jung take over.
Posted by billierosie at 04:25