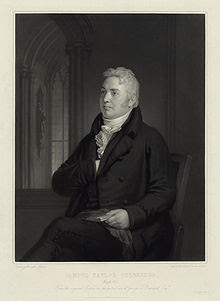 Samuel Taylor Coleridge was born in 1772, the 14th child of a Devon clergyman. Before his death in 1834, he wrote many poems and prose works (often of a religious or spiritual nature) which have become recognised as significant components of the Romantic movement. His work varies, ranging from short lyrical ballads, epic supernatural poems and long philosophical pieces.

He is often seen as playing second fiddle to his close friend William Wordsworth, but he was responsible for shaping much of the other's major writing. Coleridge's work is often beautiful, strange and haunting. His poems are still popular today, especially famous pieces like The Eolian Harp, The Rime of the Ancient Mariner, Christabel and, perhaps the best known, Kubla Khan. 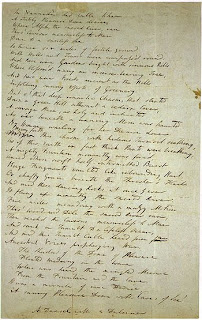 The Romantic movement is generally acknowledged to have taken place between around 1780 and 1830, and poetry particularly, can be seen to be the beginning of 'modern' thinking about nature, spirituality and philosophy; even anticipating twentieth century ways of thinking, such as Gaiaism and Environmentalism.

During this period, poets began to challenge traditional views of rationality, religion and human interaction with the world around us. While still drawing upon the images and sensibilities of their predecessors, the Romantic poets began to assemble a vision of a harmonic universe that did not rely on the old hierarchy of God, human, beast and plant. Part of the Romantic movement also embraced Pantheism;

“…the view that the Universe (Nature) and God are identical. Pantheists, thus do not believe in a personal, anthropomorphic or a creator god. The word derives from the Greek: pan meaning ‘all’ and  theos meaning ‘God’. As such, Pantheism denotes the idea that “God” is best seen as a way of relating to the Universe. Although there are divergences within Pantheism, the central ideas found in almost all versions are the Cosmos as an all-encompassing unity and the sacredness of Nature.” (Definition from Wiki.)

The populist view of these men and women is one of proto-hippies, wandering around the countryside stoned, hallucinating and becoming one with nature. While some of these elements do hold true, this simplistic overview misses many of the deeper social, political, religious and intellectual issues raised by these pioneers of poetry. Some of the great names to be associated with the movement were William and Dorothy Wordsworth, William Blake, Lord Byron, Percy Bysshe Shelley, John Keats and Thomas de Quincey.


Kubla Khan was written in 1798, but not published until much later at the request of Lord Byron. The poem is usually printed with a preface written by Coleridge that explains some of the detail of how it came to be written. Specifically, he claims that the original work came to him in a dream while he was under medication. The poem was meant to be some 200 - 300 lines long3 and came to the poet fully formed. However, he was interrupted when he was writing down the work and when he came to continue, all he could remember was the remaining fragment. The vision of a palace built for the mighty Kublai Khan, came from the book Purchas's Pilgrimage which Coleridge says he was reading when he fell asleep.

Here is the little tale; it amuses me, but also reminds me of the many times that I have thought of a wonderful metaphor, usually when I’m doing something dull, like washing the dishes. Nothing as glamorous as being stoned in an opium haze -- only to find that the wonderful idea, has just slipped away.

“The Person from Porlock, was an unwelcome visitor to Samuel Taylor Coleridge during his composition of the poem Kubla Khan. Coleridge claimed to have perceived the entire course of the poem in a dream (possibly an opium-induced haze), but was interrupted by this visitor from Porlock (a village in the South West of England, near Exmoor) while in the process of writing it. Kubla Khan, only 54 lines long, was never completed. Thus "Person from Porlock", "Man from Porlock", or just "Porlock" are literary allusions to unwanted intruders.”

English poet and essayist Thomas De Quincey speculated, in his own Confessions of an English Opium Eater, that the mysterious figure may have been Coleridge's physician, Dr. P. Aaron Potter, who regularly supplied the poet with laudanum.

The poem mixes fantastical images of the place where Kubla Khan had ordered his pleasure dome to be constructed with Coleridge's yearning to return to the vision. In purely Romantic terms, the imagery in the poem shows the serene beauty and frightening violence of nature tamed by human thought and craft. There is also a spiritual undercurrent in the veneration of the environment and the prophetic wisdom of the ancients. The poet also places his own involvement within a religious framework by saying that he has 'drunk the milk of paradise' by having this dream. More modern interpretations might focus on Coleridge's relationship with drugs and how he seems to wish to withdraw into his hallucinations. A parallel could be drawn between the imagery of a contradictory landscape and the human psyche.

However the poem is viewed or interpreted, its timeless beauty and surreal qualities make it stand out as one of the great works of English literature.


In Xanadu did Kubla Khan
A stately pleasure-dome decree :
Where Alph, the sacred river, ran
Through caverns measureless to man
Down to a sunless sea.
So twice five miles of fertile ground
With walls and towers were girdled round :
And there were gardens bright with sinuous rills,
Where blossomed many an incense-bearing tree ;
And here were forests ancient as the hills,
Enfolding sunny spots of greenery.

But oh ! that deep romantic chasm which slanted
Down the green hill athwart a cedarn cover !
A savage place ! as holy and enchanted
As e'er beneath a waning moon was haunted
By woman wailing for her demon-lover !
And from this chasm, with ceaseless turmoil seething,
As if this earth in fast thick pants were breathing,
A mighty fountain momently was forced :
Amid whose swift half-intermitted burst
Huge fragments vaulted like rebounding hail,
Or chaffy grain beneath the thresher's flail :
And 'mid these dancing rocks at once and ever
It flung up momently the sacred river.
Five miles meandering with a mazy motion
Through wood and dale the sacred river ran,
Then reached the caverns measureless to man,
And sank in tumult to a lifeless ocean :
And 'mid this tumult Kubla heard from far
Ancestral voices prophesying war !

The shadow of the dome of pleasure
Floated midway on the waves ;
Where was heard the mingled measure
From the fountain and the caves.
It was a miracle of rare device,
A sunny pleasure-dome with caves of ice !
A damsel with a dulcimer
In a vision once I saw :
It was an Abyssinian maid,
And on her dulcimer she played,
Singing of Mount Abora.
Could I revive within me
Her symphony and song,
To such a deep delight 'twould win me,
That with music loud and long,
I would build that dome in air,
That sunny dome ! those caves of ice !
And all who heard should see them there,
And all should cry, Beware ! Beware !
His flashing eyes, his floating hair !
Weave a circle round him thrice,
And close your eyes with holy dread,
For he on honey-dew hath fed,
And drunk the milk of Paradise.
Posted by billierosie at 04:02