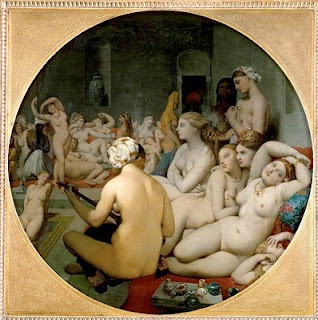 In the 19th century artists and writers, turned the viewer and the reader into a voyeur. In painting the viewer was no longer just a spectator, he or she was invited into the narrative of the painting. Writers like Emile Zola, gave the reader the opportunity to engage with their stories. To see other people’s lives from the inside.

The painting told a story and the viewer, now the voyeur, gazed on sights that may never before have been dreamed of. Imagination was given free rein and the voyeur was drawn into participating in the story. What is going on here? What has just happened? What is going to happen next? It’s up to the voyeur. This can be as titillating, or as debauched as he, or she, likes. The mind is free to wander. There is little room for an innocent story to be told; the images are as shocking and arousing today, as for the 19th century voyeur. Sex is in the truth of the narrative of the painting. As writers today, we carefully craft our pornography and erotica, but I think we have to concede that those guys, painting over one hundred years ago, did it before us, and did it very well.

Dozens of nude Turkish women are sitting or lying on sofas in various poses, in an Oriental interior which is arranged around a pool. Many of these bathers have just emerged from the water and are stretching themselves or dozing off; others are chatting or drinking coffee. This picture, dating from 1862, combines two subjects which had been close to Ingres’ heart for more than fifty years: the nude and the Orient. (from the web).

You can see Ingres’ THE TURKISH BATH in The Louvre Museum, Paris. 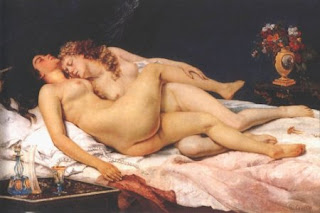 Who is this painting for? One needs to consider the nature of the artist’s sexuality, and that of his patron. Also the male heterosexual approach to female sexuality; and there are more general implications about the role of art in sexual fantasy, imagination, voyeurism and titillation.

You can see Courbet’s THE SLEEPERS, at the Musee de Petit Palais, in Paris 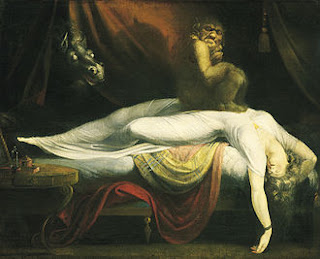 THE NIGHTMARE is a 1781 oil painting by Anglo-Swiss artist Henry Fuseli (1741–1825). Since its creation, it has remained Fuseli's best-known work. With its first exhibition in 1782 at the Royal Academy of London the image became famous; an engraved version was widely distributed. Due to its fame, Fuseli painted at least three other versions of THE NIGHTMARE.

THE NIGHTMARE simultaneously offers both the image of a dream—by indicating the effect of the nightmare on the woman—and a dream image—in symbolically portraying the sleeping vision. It depicts a sleeping woman draped over the end of a bed with her head hanging down, exposing her long neck. She is surmounted by an incubus that peers out at the viewer. The sleeper seems lifeless, and, lying on her back, she takes a position believed to encourage nightmares. Emerging from a part in the curtain is the head of a horse with bold, featureless eyes. (Wiki)

Today, post-Freud, we can see that the painting is primarily about sex - although whether it is about submission, empowerment or voyeurism is still being debated by art historians.
Contemporary critics were taken aback by the overt sexuality of the painting, which has since been interpreted by some scholars as anticipating Freudian ideas about the subconscious. (Wiki)

You can see Fuseli’s painting at the Detroit Institute of Arts, although it would be wise to check before you visit; it is often on loan to various exhibitions around the world. Another version of the painting is at the Goethe Museum, Frankfurt.

Ingres, Courbet and Fuseli are allowing morally subversive art to stand alone, independent of the accustomed role of service if the state, or official religion. The paintings are devoid of sentiment, but they do create an emotional impression and move the viewer.

The voyeur, is a polite way of saying “peeping tom.” There’s something deliciously naughty about that. We are peering in at the object’s most private moments. Spying and prying into affairs that are none of our business. The object has no control of how they are seen. It is in nakedness and sleep that we are at our most vulnerable.

While 19th century middle class women were expected to be chaste and to have little, or no knowledge of their bodies; artists went quite a way to giving women back control of their sexuality. They have as much right as men to erotica and to be voyeurs, “peeping toms,” if that is what they choose.
Posted by billierosie at 04:07