Rape: an insidious little word. Those four letters, in that order, conjure up a variety of emotions. We’ve an unwritten, unspoken contract, drawn up between ourselves, about what words convey to us. What they signify. Rape, signifies violation; and much, much more.

The word rape itself originates from the Latin verb rapere: to seize or take by force. To us, it is much more than that. It connotes fear, anger, guilt, shame. Sadly, those emotions are burdens, carried by far too many people. 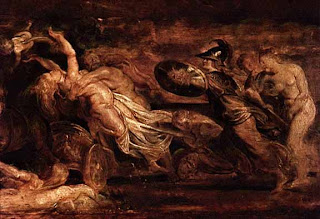 We talk about “victims of rape.” So why is rape a favourite fantasy of so many people? Why do artists paint pictures of rape? Why do writers of erotica write their carefully crafted rape stories? Why is a word that conveys that a violation, a heinous crime, has taken place, a turn on? Why do we find the paintings and stories such a turn on? We know exactly what is going on; yet still we look at the pictures and read the stories.

The tale of Persephone is a favourite subject for artists. Here is her story. She was abducted by Hades and starved into submission.

In the days when gods and goddesses walked on the Earth, the three most powerful gods were brothers. Zeus was ruler of the sky, Poseidon was god of the sea and Hades was the Lord of the Underworld.

The Underworld was a terrible place, a place without light, where the spirits of the dead went. Having entered the underworld, and having eaten there, no-one was allowed to re-enter the world of the living.

A beautiful girl lived on the Earth and her name was Persephone.
One day Hades visited Earth and rode past Persephone while she was gathering flowers in a field. He was dazzled by her beauty. He wanted her. And being one of the three most powerful gods, he kidnapped her and drove off in his chariot.

Persephone was terrified. She was pinned to the floor of Hades' chariot while he drove faster and faster, down and down, into the darkness of the underworld. In the black halls of Hades, Persephone crouched and cried, refusing all food, refusing to speak to the god who had snatched her away.

Days passed. Persephone's hunger grew. At last she could resist no longer, she ate some pomegranate seeds and, having eaten, she could not return to the world above.

Meanwhile, her Mother, the goddess Demeter, grew distracted. She knew what had happened but she could do nothing. She raged all the more because she was powerless against Hades. She went to Zeus, the king of gods, and she begged him to bring about Persephone's return. Zeus could not bear Demeter's crying. Her tears were destroying the harvest. He had to do something.


Unfortunately, he was too late to stop Persephone eating the Pomegranate seeds. The rules of the Underworld had to be obeyed. Yet, Zeus being Zeus, the rules could be stretched a little. He sent Hermes, the messenger of the gods, to strike a deal with Hades. The deal was this. Persephone would marry Hades and remain Queen of the Underworld, living there half the year. In the spring she could return to earth, and live there in the warm, bright light of the summer.

And this is what happened. While Persephone lives in the underworld, the days are short and dark and cold. But with her return to Earth in the spring, the flowers start to bloom, the leaves to bud, and the birds to sing in the sky.