I love the people who come to my blog. Clever writers and thinkers. Creative people, who gently challenge me and make me consider my opinions. Even if I return to my original idea, and think -- well that’s fine; my friends have helped me to think things through.

I’m referring here, to my last post FEMALE BONDAGE. I’d been playing with the notion that in female bondage in Art, women seem to be passive; they do not fight their tormentors. Whereas in images of male bondage, the men are active; they struggle and fight their oppressors.

I made a massive generalisation.
Oopsie!

Janine Ashbless sent me this image of William-Adolphe Bouguereau’s
THE FLAGELLATION OF OUR LORD JESUS CHRIST. 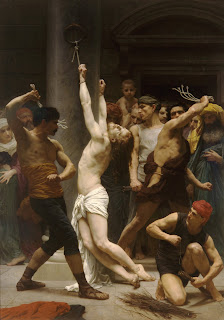 In the painting, Christ, is passive. He is in chains and is willingly letting the two men beat him. He is not fighting back. A third is tying together bundles of sticks -- presumably to take up beating Christ himself, when one of the other guys tires.

In 1607, Caravaggio paints the same theme. Caravaggio’s Christ is strong and as muscular as the men binding him. He could easily fight back. Yet he succumbs. 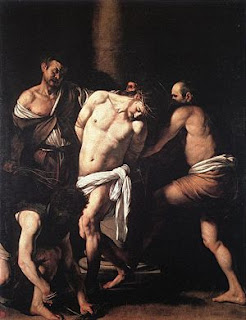 It is important to remember here, in both of these paintings, the man who is the focus of attention is Christ. As Janine says, Christ is “ Not Like Other Men.” He is the Son of God. His power is from God. There’s a lot going on; the paintings have a narrative. They tell the story of Christ’s Passion. Christ has an ancient, Old Testament prophesy to fulfil. He also needs to show that he practices what he preaches. Turn the other cheek. What use have his sermons been if he turns, and strikes a blow at his enemies?

People may have been shocked at the pictures. They’re pretty shocking today; but they would have understood the story that the Artists were telling.

This brings me on to Jude Mason’s point. Who is the audience? Who is the reader? Who are the pictures painted for? Men? Women? Are Bouguereau’s and Caravaggio’s paintings homoerotic? The men tormenting Christ, seem to me, to be one step away from violation.; from rape. Are the paintings meant to make us weep, or turn us on?

And then there’s those women, whom I claimed took a passive role in bondage. “The Doc” tells me, not so, and he sent me a couple of Aubrey Beardsley’s dirty pictures. The women here are playfully taking control of the sexual act. Size here is important. The women are huge; they dwarf the men. The women are engaging in activities not usually associated with females. One woman farts in a man’s face; another throws the contents of a piss pot over him. In the other picture, a tiny man masturbates as he powders his lady’s arse. 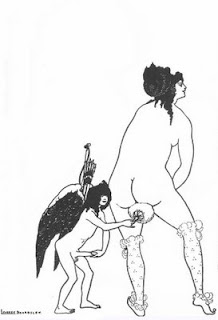 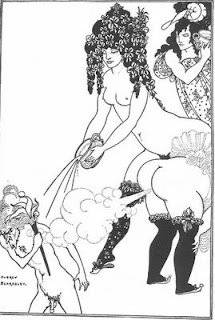 So, yes, Art. Human beings are complex creatures; sexuality even more so. It maybe that the Artist is getting hard, as he tells the story of Christ’s torment. It maybe the viewer, or both. Or neither. And who is getting turned on by Aubrey Beardsley’s drawings? I’m tempted to say “men!” But really -- who the hell knows?
Posted by billierosie at 07:14