REVIEW: TOPPING FROM BELOW. 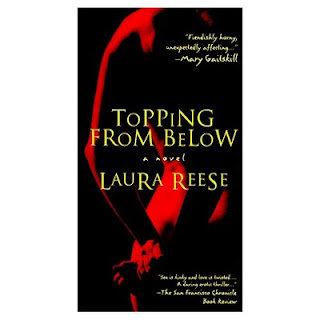 TOPPING FROM BELOW, by Laura Reese, is not for the fainthearted. I started reading it with trepidation; the book at arms’ length. I had a good idea where it was going -- and I didn’t know if I’d be able to handle it. I’d written a feature for my blog, on bestiality in literature. Why was it so taboo; it’s in classical art and literature, so why are editors and publishers so fearful of going anywhere near it?

So there I was, with the real thing in my hand -- and I was scared. I’d been quite brave in my essay -- at least, I thought I had. I’d had a lot of intelligent response; one in particular from Neve Black, who’d recommended TOPPING FROM BELOW to me. What was there to be afraid of?

I knew the book contained the real act: yes, bestiality. Neve had told me. So with chilly uncertainty nipping at my fingertips, I opened the book and started to read.

I’m tempted to describe this book as a ‘decline and fall,’ story. But it isn’t really that, because there is no fall. There’s no retribution, because the narrator doesn’t recognise that she’s done anything wrong. No sin has been committed. By the end of the book, she understands that something has been drawn out of her, that should have remained hidden.

Nora knows who killed her sister, Franny. She knows without a doubt. The culprit has been questioned, but no charges have been made.

Nora is determined to prove his guilt and have him brought to justice; it is how she goes about this, that elevates TOPPING FROM BELOW, from dark pornography, to a powerful, beautifully crafted story.

Nora’s suspect is a charismatic sadomasochist. Franny, her murdered sister, had fallen under his spell and Nora sets about taking Franny’s place. She learns of Franny’s degradation and humiliation and learns how Franny embraced one perversion after another, just to please the man she believed loved her. The difference between the two sisters, is that Franny’s actions filled her with self loathing. Nora accepts each perversion as a new way of life.

In her closing chapter, Nora, the narrator, tells us;

“M awakened in me passions I didn’t know existed…”

But she is reconciled within herself. Nora continues;

“A year ago I would’ve said there was a clear line separating the good from the evil. I would’ve said that evilness belonged in the netherworld and that evil men existed beyond the peripheries of decency. Now I’m not so sure. I believe that there is a dark side that belongs to us all, lying beneath the surface of our humanity, twisted extreme and savage in some of us, less severe in others, but always present and always at struggle with the civilised soul…”

There are dark places in our hearts; those secret doors that are best left closed.

I’m glad I read Laura Reese’s book and I am so glad that Neve Black recommended it to me. As I said TOPPING FROM BELOW, isn’t for the fainthearted. It’s challenging and confrontational -- but it’s also a damn good story I definitely recommend it, and I shall certainly be reading it again.

Published in 1995, TOPPING FROM BELOW, now appears to be out of print. At least, I couldn’t get it directly from Amazon’s warehouse. They had a list of sellers, and I had my book delivered easily. Faster, in fact than Amazon’s usual mailing.
Posted by billierosie at 10:36