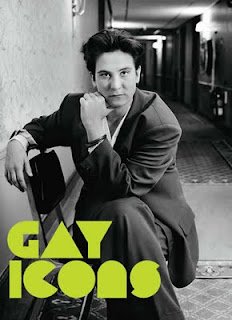 A PERSONAL PARAGRAPH ON THE GAY ICON EXHIBITION AT THE NATIONAL PORTRAIT GALLERY LONDON.

What to write here? Let’s begin shall we as I feel the need to be pedantic, on the definition found in many dictionaries of the word icon as icon has become to mean all manner of nonsense! ‘Icon a sacred image on a wooden panel’ I will stick with that and shan’t mention the references to computers!

Sandy Totsvig, sorry I can’t spell is a Danish Comedienne who appears a lot on day time telly and radio. I do find her very amusing and she does make me laugh and somehow she was able to have or instigate an exhibition of so called gay icons at the above mentioned museum. As a gay guy who feels labels are for clothes not for people I have to say I found the exhibition a bit odd, not at all stuffed full of icons.

Maybe I am being a bit harsh or am I missing the point? Many of the subjects portrayed are hugely important in their own right but they are not icons! In fact many of the most important figures socially are utterly obscure and about as far away from icon status as the planet Neptune! Icon here is a modern interpretation of the word and here it used far too loosely.

Billy Gene King, great woman, great inspiration. Elton John marvellous musician now slightly eccentric but not an icon, Alan Turing who saved million of lives by helping to end the second world war early, but who killed himself because he couldn’t live in a world that hated queers is NOT an Icon; he bloody well should be but he ain’t! How odd that he (and how empty this is ) has received an apology from the prime minister for the appalling manner in which he was treated.

Interestingly, and as an aside as if to illustrate a point, the Apple Mac logo or Icon, an apple with a bite out of it is said to be a reference to Turing. He killed himself by taking a bite out of poisoned apple. That symbol is iconic as everyone is likely to know what that means, show someone a picture of Turing and they won’t have a clue!

Don’t get me wrong, I welcome anything that celebrates diversity in all its forms but this exhibition, in a small side room of The National Gallery was disappointing, I did learn that some football manager was gay and said to myself well I never guessed that one. One of my favourite folks was illustrated in a photo portrait and that was Peter Tatchell. I think he is fab but even he as great to me as he is, is not an Icon!! I should point out that I am an atheist in case anyone thinks I am some kind of rabid Christian. Not sure what my rant has to do with fetish but Tom of Finland I think did get a mention but interestingly no mention (I think) of Robert Mapplethorpe.


Many thanks to the Viscount Andrew for this piece. At least you went to see it, sweetheart. Not like some I could mention -- who have an opinion, but glean their knowledge from the newspapers!!
Posted by billierosie at 09:34