AT MY FEET by Michel Arnaud 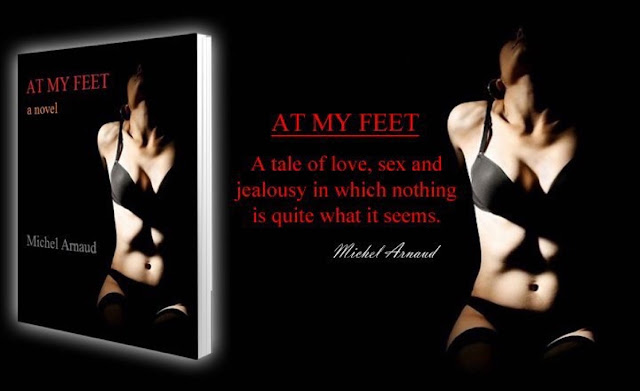 So, let me pose a question…what do you think about control? I’m curious, it’s not really that important, it's not such a big deal, but let’s just play around with words for a few minutes. Control, isn’t even that mighty a word, yet for a small word it has several definitions. For instance, it’s just occurred to me, that coming from billierosie, you may have assumed that I'm talking about a Dominant, submissive relationship, where one person has control over another…bdsm, the source of lifestyle choices for some, a fetish game for others.

Neither am I talking about self-control, nor a different sort of control...something, or someone who is out of control, who needs to be controlled. I am talking about the control we think we have over our own lives and that particular concept is the central theme running through Michel Arnaud’s book…His protagonist, Antoine Cassernet, exerts such a tight control over his life that it is nothing short of miraculous.

Antoine Cassernet is a high flier in the world of banking, his annual salary cuts the sort of figure that most of us can only dream of. He has a beautiful wife, Sandrine, a wonderful country home in Normandy, France…he also has two mistresses and as we meet Antoine, he is about to take on a third; it only takes a few little steps for Antoine’s life to unravel.

I'm not that big on control these days and Michel Arnaud has reminded me why. Those little steps unravelling our lives, big steps too, can hit us at any moment. Many of you reading this review, will have had your life plans changed, drastically, dramatically…often for no apparent reason. And there is nothing, nothing you can do about it.

When Antoine Cassernet’s life plan hits a brick wall, he panics, trying to regain his footing. How has this happened when he thought he’d got it all worked out? He becomes suspicious; paranoid, he must have action. He resorts to subterfuge…going to dark, sinister lengths to prove that someone has betrayed him.

Antoine’s jealous rage is worthy of an Othello, being fed a filthy poison…drip, drip, drip, by a scheming Iago.

Michel Arnaud is an astute observer of human nature...human frailties, he has a keen interest in the way people use language. His writing style is fun...he gently prods his characters into making statements that have the air of the absurd...he makes me think of the ways Samuel Becket, the playwright, uses language. Like Becket, Michel offers a sort of tragicomic view of human existence. And again, like Becket, Michel conveys a real fondness for his characters.

Control over our lives is an illusion, but it is an illusion, that it seems, is necessary to ground us emotionally. I think that I knew it before reading At My Feet...but it's good to be reminded.

So if your life plan is flowing smoothly, your controlled days merging from one to another in a rosy glow…well, that’s great, good for you, but watch out, remember Antoine Cassernet...be warned.

Michel Arnaud describes At My Feet as "a tale of love, sex and jealousy, where nothing is quite as it seems." It's more than that...it's an engrossing tale, told with finesse by an exciting erudite new writer whom, I know, we are going to hear a lot more from.

At My Feet is available at Amazon UK and Amazon US The poster image is by Gary Walker at Look4Books
Posted by billierosie at 03:54