THE WIDOW'S SON..Lies And Consequences by Daniel Kemp 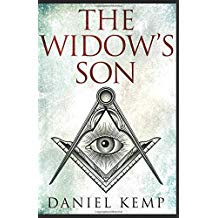 “The Widow’s Son” by Daniel Kemp is both an intriguing piece of writing and intriguing in terms of the genre of the political thriller; Daniel Kemp has created a tightly paced, engaging narrative presenting his reader with a murky, soiled, strangely exciting world of power and corruption.

This is a dark world of spies, lies and deceivers and from his newly created position as head of the British Joint Intelligence Committee, and with only one or two people he can trust, Daniel Kemp’s protagonist, Patrick West, realises that he has a potential disaster on a world wide scale; nothing short of a war on humanity, to circumvent. And how is the narrator going to achieve this with deception on such an extensive scale?

Nothing is clear for him; why this promotion? Whom can he trust?

In a way, this book can be viewed through the lens of appearance and reality. I’m surprised I hadn’t thought of this before, after all the book is subtitled “lies and their consequences.” Whom can Patrick West believe? Whom can the reader believe? Daniel Kemp has given us an engaging narrator, but how reliable is he?

We would do well to keep just a tiny space of doubt in our minds. Just as people in the real world tell a tale from their own point of view, so it is with fiction, and Daniel Kemp knows what he is doing; he writes fiction at its finest.

This is the third book in a trilogy that began with “What Happened in Vienna Jack?” This is followed by “Once I Was a Soldier.” With the exception of a few chapters in all three books, the narrative is driven, in the first person, by Patrick West and it is through his eyes that events unfold. The beginning of each book picks up some twenty years after the conclusion of its predecessor; Daniel Kemp is tracing his protagonist’s life, from his mid-twenties, his late thirties and finally, his early fifties. In the Widow’s Son we join the narrative sometime during the mid nineteen nineties.

Daniel Kemp is an eloquent writer which makes his book a pure pleasure to read, he understands the need for meticulous research; he has to. If a writer is using past events to blend with his fiction, then those events have to be accurate, Daniel Kemp knows this and he will not patronise his reader by writing an approximate version of history.

I said earlier that The Widow’s Son is fiction at its finest, I really do believe that. Enjoy. This is worth every penny of a Kindle download, or for a real treat the paperback is a keeper. Oh, and I never saw the ending coming...I wonder if you will!


The Widow's Son is at all Amazon outlets.