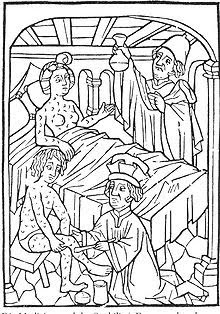 For a man in Victorian times there were two kinds of women: 'nice' women of your own class, whom you married; and prostitutes or women of easy virtue, whom you went to bed with. Victorian society looked indulgently on men who sowed their wild oats. For respectable women it was a different story: they were expected to be virgins when they married. This meant that, to gain sexual experience, men would resort to prostitutes. Unfortunately, with prostitutes came the threat of a sexually transmitted or venereal disease, such as syphilis or gonorrhoea.

As well as being painful and deeply embarrassing, venereal disease, if untreated, could lead to sterility, impotence, madness and eventually death. Penicillin would not be discovered until the 1920s and would not be available as a medicine until the Second World War. In the 19th century, the main treatment was mercury, in the form of calomel, ointments, steam baths, pills, and other concoctions. It was crude, painful and largely ineffective, as well as having side-effects such as tooth loss, kidney damage, anaemia, mouth, throat, and skin ulcerations; neurological damage; and death.


Research into an effective treatment for syphilis was controversial because of the perception that a widely available cure would increase “immoral” behaviour.

In Victorian days the official line on sex was that it was solely for the purpose of producing children. It wasn't supposed to be fun. So, however tolerant the Victorians may have been in practice of men having sexual adventures, venereal disease was, in some quarters, regarded as God's punishment - the wages of sin.


This is one reason for the flourishing trade in virgins - for those upper class men who could afford them. They were not necessarily paedophiles; but were protecting themselves by having sex with a woman who had never had sex before. She could not be infected with these diseases.

There was another, more chilling reason, why virgins were so highly prized. It was believed that sex with a virgin could actually cure a man who was infected with syphilis.

By the middle of the 19th century the authorities were increasingly worried about the high incidence of venereal disease among soldiers and sailors. For this reason the Contagious Disease Acts of 1864, 1866 and 1869 were passed. They allowed known prostitutes working in garrison towns or naval bases to be examined, often brutally. If they were found to be infected they could be imprisoned in state institutions.


Women were assumed to be the source of infection and the Acts were deigned exclusively to protect men. The men themselves were not examined, so that there was every chance of a client passing a disease on to a prostitute, rather than the other way around.

However, Victorian society was not concerned about prostitutes who were infected with incurable diseases by their clients. It was the danger of men passing on venereal disease to their wives and families that caused anxiety and moral outrage.


Moral reformers such as Josephine Butler campaigned against the Contagious Disease Acts. They claimed that they were sexually discriminating in that they laid all the blame for 'immorality' on women. The Acts were finally repealed in 1886.

Syphilis first appeared in Europe in the 1500s. But by the Victorian era, it was rampant. Thousands endured paralysis, blindness and insanity from the infection before finally dying.


Syphilis in the Victorian era was known to be an infectious disease that entered the body through a minute cut or small wound. The primary impact of the disease would be a lesion or a sore at the initial “site of inoculation.” Six to eight weeks later, a secondary eruption would flare up, generally first pink in colour and eventually copper. In this second stage of syphilis, symptoms such as depression and chilling in the joints and limbs would often occur and within weeks or years disappear spontaneously. In its tertiary stage, syphilis affected the brain, liver, lungs, and muscle. This disease was most often spread through sexual contact but it also spread congenitally, where mothers would infect the infants in their womb.


As I write, syphilis cases are rising. Some hospitals in major British cities report that they are now treating hundreds of patients a year, compared to none at all just a few years ago. In the past two years, there have been outbreaks in Manchester and London through unprotected sex.

This blog post has been compiled using sources from the Web.
Posted by billierosie at 04:46