MY PRISON WITHOUT BARS; Taylor Fulks' speaks out her indictment... 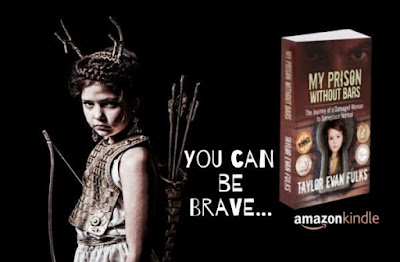 This is a tricky book to write about...can I find anything positive to say about a book that delves into a subject that is abhorrent to most of us? I'm talking about paedophilia and within the framework of paedophilia the destruction, the helpless collapse of innocence. Something beautiful, that had so much potential, is ruined...her abuser might as well have crushed her face with his boot and ground it into the dirt.

The horror...the pity of it...I want to make it alright…but I can't…it will never be alright because this actually happened to this little girl.

But just because a subject upsets me, upsets us, is not a good enough reason to not talk about it. We need to talk about it, paedophilia is a horrible reality. Taylor's book has had accusations of pornography thrown at it. Some have even tried to get it banned. I don't understand why.

Would My Prison without Bars be enticing to a paedophile...would the book corrupt someone whose secret paedophilic fantasies had never been acted on? I don't know...who knows what the fuck goes on in the fucked up mind of a paedophile?

Whatever interpretation you want to put on her intent, Taylor is giving a voice to those who have no voice…the children.

We want honesty in literature don't we? Happy ever after is sugary...it's nice, but it is not a reality for most of us. Romance novels offer us escapism...and how we love it. I don't know the statistics, but the Romance genre must account for a huge chunk of the readership across the planet.


The narrative is graphic...there is intent to shock, but Taylor is just telling it like it was. This was Taylor's childhood from the age of three, yes THREE, through to adolescence...dreading the nights, and she's talking about every night, the constant demand for sex as her abuser gloats and ravages her infant body...felatio and sodomy were his preferences.

Her violator was her stepfather...her appeals to her mother went unheard.

And, of course the abuse has had its affect...always disastrous relationships with men…making terrible choices which precipitate absolute betrayals of trust.

Taylor's book will always be read with a chilling shudder.

What amazes me, is that Taylor is still sane.