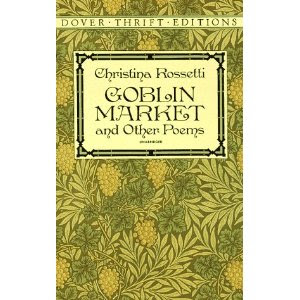 Goblin Market, is a poem by Christina Rossetti. It was published 1862. It is a fairy- tale which has been subjected to many interpretations, some seeing it as religious allegory, others see it as sexual symbolism; it tells the story of two sisters, tempted by goblins with forbidden fruit. 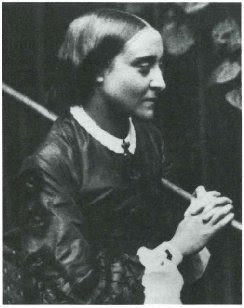 The story narrated in "Goblin Market" is simple. Two sisters, Laura and Lizzie, who apparently live together without parents, are taunted by goblin merchant men to buy luscious and tantalizing fruits. Lizzie is able to resist their coaxing and runs home, but Laura succumbs. She pays for the wares with a lock of her hair and gorges herself on the exotic fare, but her desire increases rather than being satisfied. She returns home and informs Lizzie that she will venture back into the glen and seek the goblins again. But Laura goes back to the glen, she can no longer hear the call of the goblins and grows increasingly apathetic. She refuses to eat and begins to age prematurely. Fearing for her sister's life, Lizzie decides to seek out the goblins in order to purchase an "antidote" for her sister. When the goblins learn that Lizzie does not intend to eat the fruit herself, they throw her money back at her and verbally and physically abuse her, pinching and kicking, tearing at her clothing, and smearing the juice and pulp of their fruit on her. Lizzie refuses to open her mouth and returns home with the penny in her purse. She invites her sister to suck the juices from her body, which Laura does. The juice of the goblin fruit now tastes bitter to Laura, and she writhes in pain from having consumed it. But the antidote works. Laura returns to her former self, and the epilogue of the poem describes Laura and Lizzie as wives and mothers. Laura now tells the story to their children, reminding them that "there is no friend like a sister." 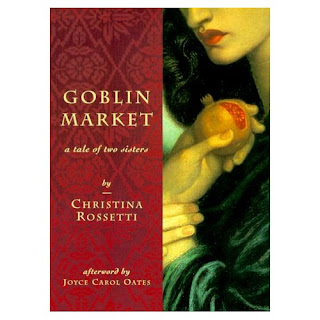 Christina Rossetti sates the reader with glutinous words as she describes the fruit; already, in the first verse she introduces a sexual theme to the poem. “Plump unpecked cherries/ Melons and raspberries…Swart-headed mulberries, Wild free-born cranberries,” The passionate words, the sexual sounds are very intentional and though sex is never explicitly mentioned, it is constantly referred to. Language often suggests a sexual growth, or readiness, “All ripe together”. Goblins proffering plump unpecked cherries tempt the two blushing girls.

"O! cried Lizzie, Laura, Laura,
You should not peep at goblin men." 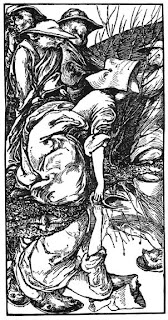 It is an ad man's dream, the luscious language drawing on the senses; the reader’s mouth waters, just as Laura’s mouth does. Why resist the lure of the Goblin men? Why shouldn’t Laura drink and eat the delicious fruit that is so full of promise? I’m with Laura here; I would eat the fruit, but then I am never one for doing as I’m told. The lure of sensuous excess is overwhelming.

The next day, Laura is shocked to find no goblins and no succulent fruit in the glen. Surprisingly, only Lizzie can hear the insistent cries of the goblins. Laura falls into depression and sickness when she realizes that she may not experience the fruits again.

Rossetti’s description of Laura’s ‘come down’, is akin to that of an addict, coming off heroin; going cold turkey. Opium was prevalent in Victorian England. Laudanum could be purchased over the counter. Perhaps Rossetti had experience of addiction within her circle. She describes Laura’s fall.

“Her hair grew thin and grey;
She dwindled, as the fair full moon doth turn
To swift decay, and burn
Her fire away.”


Lizzie watches anxiously as her sister's health deteriorates. Finally, she can no longer bear it. At this point she takes a coin and goes to the glen to buy fruit for her sister in hopes of reviving Laura's well being. In a moving passage, Rossetti illustrates brutally, the rude and invasive behaviour of the goblins as they try to force Lizzie to eat the fruit. Lizzie refuses, knowing to absolutely resist the fruit, but she lets the juices of the fruit stick to her body to bring home to her sister. Upon returning, Lizzie invites Laura to "hug me, kiss me, suck my juices" Lizzie feasts upon her sister's skin, taking in all the nectars. The juices spark a moment of both bliss and suffering.


Rossetti's word choice in "Goblin's Market" consistently gives rise to many sexual connotations. She describes sensual parts of the body such as lips, breasts and cheeks. She also utilizes verbs such as to hug, kiss, squeeze and suck. Sexual connotations heighten the relationship between the male goblins and female maidens. Laura's ecstatic experience with the goblin's fruit, is an indescribable orgasmic high. The goblins' over-invasive and aggressive advances towards Lizzie represent sexual invasion; a rape.

Lizzie uttered not a word;
Would not open lip from lip
Lest they should cram a mouthful in;


The meter and rhyme scheme are irregular in "Goblin Market." The poem generally follows an ABAB rhyme scheme, but not always. In fact, sometimes there's a long gap between a word and its rhyme, and sometimes there are many lines in a row with the same rhyming syllable at the end. This technique will have different effects on different readers. For me, Rossetti strikes a chord of dissonance.

Occasionally, as the poem goes on, the narrator will slip in an adjective that suggests that she's not as objective. For example, she describes Lizzie's advice to Laura as "wise" and Laura's silence as "sullen". And finally, the narrator actually breaks out and addresses Laura directly:

“Ah fool, to choose such part
Of soul-consuming care!”

The narrator calls Laura a "fool" for "choosing" to eat the goblin fruit, even though it meant giving in to "soul-consuming care." The narrator's objectivity seems to go out of the window in these lines, which mark the climax of the poem. It's as though the narrator just couldn't keep her mouth shut during the exciting part – she had to throw in her two pennies worth.

In the assault on Lizzie by the Goblin men, Rossetti uses imagery, similes and descriptive language to carry the theme of temptation, and sex throughout the poem. The assault on Lizzie has sexual allusions; they scream rape. “held her hands and squeezed their fruits.” The violent acts inflicted upon her are not kicks and punches, but far slower and more thought out. “Tore her gown and soiled her stockings/ Twitched her hair out by the roots.”

The Goblin men taunt Lizzie. Their taunts carry heavy sexual overtones as well. First they "Squeezed and caressed her" and then invite her to "Bob at our cherries / Bite at our peaches”, and to "Pluck them and suck them". When she refuses to eat, they "Held her hands and squeezed their fruits / Against her mouth to make her eat".

Although Rossetti was a frequent contributor to her brother Dante's Pre-Raphaelite journal “The Germ,” she achieved immediate and significant recognition as a skilled poet with the 1862 publication of “Goblin Market and Other Poems.” The publication of the volume was hailed as the first literary success of the Pre-Raphaelites, earned critical and popular acclaim, and paved the way for the publication of Rossetti's next volume of poetry, “The Prince's Progress and Other Poems”. (1866). Rossetti went on to publish religious poetry, devotional prose, and nursery rhymes for children. Due to the early success of "Goblin Market," Rossetti rarely fell out of favour with critics or her reading public and remains a focal point of critical study of nineteenth-century literary figures.