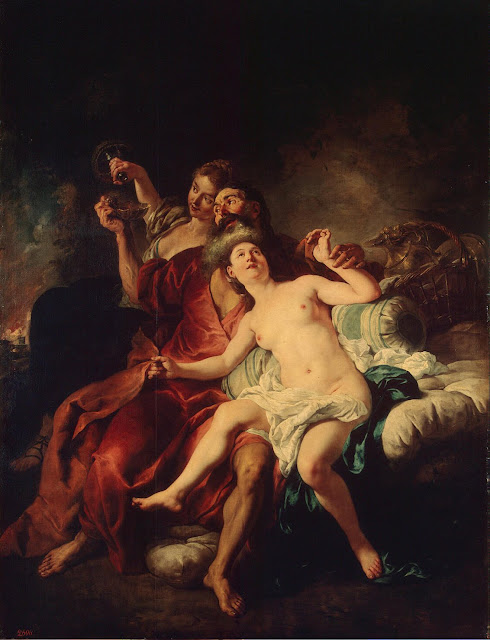 Incest; the final taboo. It is taboo, as far as I am able to ascertain, in every society on the planet. The exceptions to the rule appear to be royal dynasties, in particular the ancient Egyptian Kings and Queens.


There’s something alluring about incest; if not why, over the millennia, do we persist in telling ourselves stories about it?


Once upon a time, long, long ago there was a father and his two beautiful daughters. The father’s wife had recently died. Apart from his two daughters, the father was alone in the world. The two daughters got their father drunk and seduced him. Both girls became pregnant and gave birth to sons. No-one seemed to mind; even God. It really wasn’t such a big deal.


Even to our media hardened ears the story is shocking. You can just imagine the newspaper headlines if it were to happen today.


The story is from the Bible; The Genesis 19 account of a father and his daughters ensuring the survival of the human species through an incestual act; it is an archetypal story woven into the very fabric of changing social norms and psychological dynamics unfolding over several millennia.


Sophocles tells the tragic tale of Oedipus. Oedipus -- who marries the widowed queen Jocasta, not knowing she is his mother. After many years of prosperity and conjugal bliss, a plague falls on the people of Thebes. Upon discovery of the truth, Oedipus blinds himself, putting out his eyes with the long pins of his wife’s brooches. Jocasta hangs herself. After Oedipus is no longer king, Oedipus' sons kill each other. Everybody dies.


Fast forward millennia. “Brookside” 1996: A British Soap, famous for its challenges to our views. The incest storyline, in which brother and sister, Nat and Georgia Simpson,
are discovered in bed together by their younger brother, is described by Phil Redmond, the producer, as “breaking the last television taboo.” It was so shocking an MP urged viewers to complain "in their millions".


Ian Rankin’s detective, Rebus, has a crime to solve. An eminent obstetrician is murdered – his throat cut, the arteries in his wrists slit open. It’s literally a bloodletting – he has bled to death. Near him there is a tiny coffin – an effigy of a tiny baby inside smiles. A Bible lays opened at Genesis 19 – the story of Lot and his daughters. There’s a creepy exposure of incest in Ian Rankin’s story; this is incest that has produced a child, a daughter. The daughter traces her birth mother; Fiona. She is understandably shocked when she learns the truth about her parentage. Her mother is also her sister; when the daughter asks Fiona why she didn’t stop the abuse, she is told that there was no abuse;


“There was a time when I wanted him to stop, but I couldn’t. I love him.”


The intrigue of incest has gone full circle and leads us back to where it all began. The tale is as relevant today, as it was millennia ago.

Okay, the title suggests that you’re not going to get the sophistry of Sophocles, but the point is, the taboo is still demanding to be heard right from antiquity to the present day. Somehow incest keeps bubbling to the surface of our consciousness.


Here is a link for a free download of part one of Colin Hobbs’ book.


You can buy the book here.

You can read the tale of Lot and his daughters here.