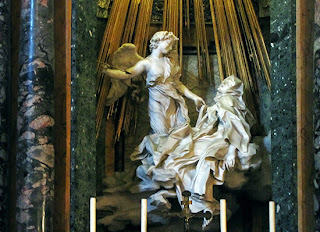 Bernini was the first sculptor to realise the dramatic potential of light in sculpture. This is fully realised in his famous masterpiece Ecstasy of Saint Teresa (1645-1652, Santa Maria della Vittoria, Rome), in which the sun's rays, coming from an unseen source, illuminate the saint and the smiling angel about to pierce her heart with a golden arrow.


Saint Teresa was a nun who was canonized (made a Saint by the Church) in part because of the spiritual visions she experienced. She lived during the middle of the 16th century in Spain—at the height of the Reformation. Saint Teresa wrote several books in which she described her visions.


Here is Saint Theresa’s description of the event in her own words.


“Beside me, on the left, appeared an angel in bodily form.... He was not tall but short, and very beautiful; and his face was so aflame that he appeared to be one of the highest rank of angels, who seem to be all on fire.... In his hands I saw a great golden spear, and at the iron tip there appeared to be a point of fire. This he plunged into my heart several times so that it penetrated to my entrails. When he pulled it out I felt that he took them with it, and left me utterly consumed by the great love of God. The pain was so severe that it made me utter several moans. The sweetness caused by this intense pain is so extreme that one cannot possibly wish it to cease, nor is one's soul content with anything but God. This is not a physical but a spiritual pain, though the body has some share in it—even a considerable share.”


To a contemporary viewer, Saint Theresa is a woman on the very verge of tipping over into orgasm bliss. The ecstatic expression of her slightly parted lips; the tightly closed eyes, shutting out superfluous sensation. The angel’s spear, with the flame at the tip. Bernini presents us with a sacred image; it is profane too.

You can see Bernini’s fabulous (fabulous in the truest sense of the word) in the Cornaro Chapel, Santa Maria della Vittoria, Rome.
Posted by billierosie at 04:19