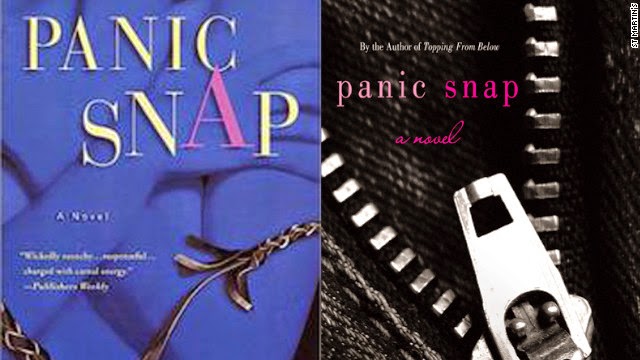 
So, not only was I pleasantly surprised and ordered the book immediately, but I was delighted to discover that Topping From Below is back in print! Why it ever went out of print I’ll never understand; I can only surmise that a lot of people, were doing as I had, and ordered their hard copy of the book, still from Amazon, but via the independent sellers. (And, that btw is a cool way to negotiate at Amazon. The books are often next to nothing -- all you pay is for mailing and the books, unless they say otherwise, are near perfect.) But I digress, I’m supposing that the publishers realised that the book was selling and ordered a reprint. Whatever happened, Laura Reese has now gained the status of a “cult following” and her book has become a “cause celebre” of Erotica.

So what is this “heart of evil?”

The book opens in a court room. There is a trial, a woman is accused of murder and her guilt is assumed, but not yet announced.
While the woman awaits the jury’s verdict, we hear her story.

Fifteen years ago, the woman was found beaten, mutilated beyond recognition and close to death. Slowly, she recovers, helped by ground breaking surgical procedures and intense physical therapy.

The body can, and has recovered, whereas the mind has a mind of its own. And the traumatic events of that morning so long ago, have erased her memory. She does not know who she is; she has no memory of the attack, or her attacker. She has no memory of her childhood or her parents.

She takes the name of Carly Tyler. But who is she really?

Her broken face is healed but she does not recognise herself. The surgeons have done their best, but it is unlikely that anyone who knew her before will know her now.

A just by chance feature in a magazine precipitates a compulsion; a resonance. A photograph of a powerful man suggests a link to her past. The name of his vineyard is in Napa Valley wine country, Byblos; that is where she must go.

A woman’s search for her identity drives the novel – hand in hand with sexual obsession.

Those of you who have read Laura’s previous book will guess that they are in for some explicit bdsm. Those of you who haven’t read Topping From Below – well Panic Snap is not for the faint hearted. Dominance and submission; a Dominant who demands total obedience, even to the point of exerting control over bodily functions. The Bestiality that featured so strongly in Topping From Below, may be absent, but Laura Reese has no fear of breaking through boundaries, shattering Taboos. She uses the character of Carly to demonstrate the psychological dimension of the true submissive. Like the character, of Nora in Topping, Carly bears no shame, no guilt at the depravities her Dominant inflicts upon her; rather she embraces them with mere curiosity as to how far he will push her, and how far down the road she will go.


Laura Reese is a writer with an instinct for precision. Her characterisation is superb; her delineation of scenery is meticulous. She could almost be writing staging instructions for a theatrical adaptation. She writes at a steady, even pace from the description of a room, a vista, food that Carly has prepared for dinner, to the flowers in the magical garden growing alongside herbs and vegetables.
All is coloured to add to an atmosphere, sometimes of tranquility, sometimes evoking fear.


“I started to reproach her, but then felt her tongue once more on my body, sliding over my buttocks. She kissed every space of flesh, made my skin ripple with anticipation, then spread my buttocks and ran her tongue down the crack in the middle, slowly, and, just as slowly, came back up again. I let out my breath, a lust-felt sigh. Once more her tongue made the descent down the divide, as slow as a slimy snail, lingering, lingering, taking her time, until she reached my asshole – Satan’s hole, she whimsically called it, the dark, winking eye of evil. This time she didn’t pass it over, but lapped at it as if she were an animal, licking it over and over, like a dog tonguing a wound. She caressed my testicles with one hand, the other still spreading my buttocks, then left my balls to reach down and pull on my penis, her tongue still lapping. Her hand slid smoothly on my cock – she must’ve used spit to moisten it – as she tongued my asshole.
“I murmured my approval, then settled down on my elbows and let her continue. She circled the hole with her tongue, wetting it, massaging it, the most hidden part of my body – ‘it’s the brown pit of everything forbidden,’ she once said with a smile – then she pushed her tongue inside as if it were a worm, wiggling its way home.”

“I feel the desire in him, the slight tremble of his flesh, and this makes me work harder, sliding my tongue in farther, feeding the grasping, sloe-eyed hole, and it comes to me then, this resonance of something long forgotten: a renascent passion to please. My response is visceral and unbidden, too complicated for words. I lick and suck him, shove my tongue in his bowels, a vortex pulling me in, while my mind spins. I feel transported to someplace dark and crepuscular, to a feral world where ancient passions hold sway. I keep my tongue inside him, moving, tasting, pushing for lower depths. I am an adjunct in this sex, a mere appurtenance to another, and even as I tongue him deeper, willingly now, needing more of him, even as I do this a distant tocsin rumbles in my brain, sounding the perils. I’m on precarious ground here, traversing the slippery scarps of James’ scree-ridden soul.”


Writers and readers of the Erotica genre talk a lot about ‘the final Taboo,’ well, I do anyway. What Carly is doing is fascinating to her and to us, the reader. She is going against everything we’ve ever been taught, going right back to when we were babies – ‘it’s a dirty place, no, no, do not touch it – wash your hands, flush away all signs of it…’ And where will she go from here? Full blown Coprophilia? Probably, you can sense her carnal need in the paragraph above. Laura Reese does not prevaricate about what is going on here – there’s no innuendo – no clever metaphor to dilute and sanitise. Carly is fucking James’ anus with her tongue, higher and higher up she goes. If his bowel chooses that moment to empty – well, so be it…


Writers return to the same themes over and over again. Only when they have written it out – only when they have dealt with it, will they leave it alone. Laura Reese has risen to a mighty challenge in Panic Snap – and who knows why she chose the theme of Sadomasochism? Might as well ask why did I choose to read it? And you will probably read it too – why? Because it’s forbidden? Because it tantalizes? Maybe that is why Laura Reese has delved into it – or maybe she just wanted to see if she could, once again, write the Taboo – the forbidden.

But as I say, who knows, and does it really have to matter?

Imagine what those same complaining readers would have said if Laura Reese’s follow up to Topping From Below had been just a plain old murder mystery – with no sex? They would have been furious – that would have been a good reason for a negative review.

If you are reading this on review on Amazon – it will be censored to accommodate Amazon’s hypocritical bullshit. For the full review go to my blog;

In a recent interview Laura Reese said that her next book will not feature Sadomasochism.
Panic Snap is available at all Amazon outlets.

Here it is at Amazon US And at Amazon UK
Posted by billierosie at 06:02