MORAL PANICS, FOLK DEVILS & THE CULT OF THE CLITORIS 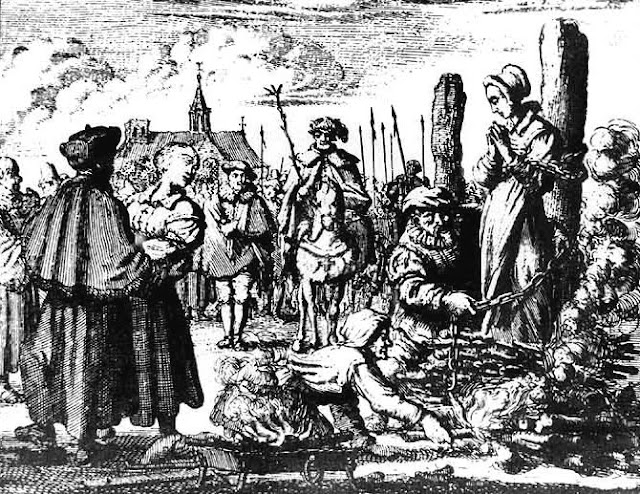 These days, we’re used to the term “moral panic”. But in case you haven’t come across it it’s “an intense feeling expressed in a population about an issue that appears to threaten the social order.” We’ve seen it happen in our own times; the threat of immigrants, the threat of asylum seekers, the threat of paedophiles, homophobia…the threat of homosexuals. At some point in our present, and recent past, all of these “folk devils,” have been seen as a threat to our social order.


Rewind the clock back to Germany in the 1930’s and 1940’s and we have the anti-Semitism which resulted in the holocaust and the horrors of the gas chambers; resentment against the Jews had been simmering for centuries. According to popular thinking at the time, the Jews were responsible for everything that was wrong in Germany. Failure to win the First World War was the catalyst for the horrors that followed. Germany had been demoralized once too often and it was the Jews’ fault.


“Moral panics are in essence controversies that involve arguments and social tensions and in which disagreement is difficult because the matter at its centre is taboo. The media have long operated as agents of moral indignation, even when they are not consciously engaged in crusading or muckraking. Simply reporting the facts can be enough to generate concern, anxiety or panic.”
Stanley Cohen


I think that probably the earliest example of a moral panic is the 16th century witch hunt.


“Before 1750, they were legally sanctioned and involved official witchcraft trials. The classical period of witch hunts in Europe, and North America, falls into the Early Modern period of about 1480 – 1750, spanning the upheavals of the Reformation and the 30 Years’ War. The trials resulted in an estimated 40,000 to 60,000 executions.”

It appears not to matter whether they fall into a time of plenty, or a time of frugality, a society can be susceptible to a moral panic at any time. It’s 1918, the final year of World War I and there was an atmosphere of gloom throughout England. The sight of so many men with grotesque wounds was a dispiriting reminder of a war that seemed to have no end. And the mood was no better in the trenches. Britain was not doing well. The German troops were flourishing.


Some wondered why we seemed incapable of victory. Might it somehow be our own fault? Could there be something rotten at the heart of the British ruling class? One man certainly though so. The maverick MP, Noel Pemberton-Billing.


Billing was a colourful self publicist, who believed that Britain was being sabotaged by thousands of perverts in the pay of the Hun. He alleged that powerful figures in Britain had been corrupted by perverted German spies.


“They have used,” he claimed. “Practices that all decent men had thought had perished at Sodom and Lesbia.”


These astonishing allegations found a ready audience by a people frustrated by their failure to win the war. They would also land him in court.


On the morning of 29th May 1918, a great crowd gather at the Old Bailey, for what promised to be the most sensational court case in Britain for many years. It was a newspaper man’s dream and it involved an exotic dancer, high politics, enemy spies and sexual deviancy. It threatened to blow the lid off the British Establishment.


According to Billing, 47,000 British people had been corrupted. Their names had been written in a secret dossier which Billing called “the black book”. He claimed that the black book held the names of Cabinet Ministers, Privy Counsellors, Newspaper Proprietors, even members of the King’s own Household. And he said that the wives of senior public figures were in especial danger because in the throes of lesbian ecstasy, the most sacred secrets of the state were betrayed.


So where were these degenerate traitors to be found? At the theatre of course! Specifically at a private production of Oscar Wilde’s banned play, “Salome” starring the voluptuous actress Maud Allan.


In an article entitled, “the Cult of the Clitoris”, Billing asserted that the actress was having an affair with Margot Asquith, wife of the former Prime Minister.


Billing was charged with Criminal Libel.


Conducting his own defense, he used his trial as a platform to reveal to the nation how far the moral rot had spread. He called, as a witness, a woman who claimed to have seen the black book, listing all the people who had been corrupted by the filthy German agents.


“Is Mrs Asquith’s name in the book?” he asked.

“Yes,” the witness replied enthusiastically
. “It is!”

“Is Mr Asquith’s name in the book?”

And Billing pointed to the judge. “Is the Judge’s name in the book?”


There was complete chaos in the Court. It was all nonsense of course, but Mr Justice Darling was out of his depth and rapidly lost control of proceedings. This absurd trial lasted for 6 days. On 4th June 1918 the Jury returned their verdict. Pemberton-Billing was not guilty of Libel. He left the court to thunderous applause and when he got onto the street outside the Old Bailey his supporters threw flowers at his feet.


And Pemberton-Billing’s ridiculous rantings had struck a chord -- people were worried. And at this stage of the war there was much to be worried about. The balance of power was with Germany.

(This blog post has been put together using sources from the Web and the BBC/Open University documentary series, Britain’s Great War, presented by Jeremy Paxman. If you are in the UK and have access to BBC IPlayer you will find the series there.)