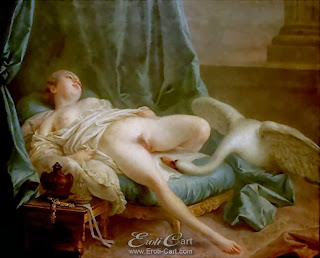 Leda and the Swan.

From an early age, Boucher was a student of the early Rococo artist François Lemoyne until 1721 when he began working as an engraver. In 1723 Boucher won the Prix de Rome, an illustrious art scholarship to study in Rome that Boucher's teacher, Francois Lemoyne, also won in 1711. Boucher didn't go to Rome immediately, and continued working as an engraver for Laurent Cars for 300 francs a year, and then travelled to Italy 4 years later in 1727 at his own expense. 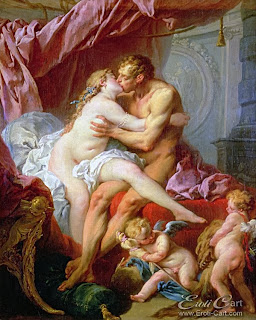 The viewer is a voyeur of an intensely private moment.

Upon his return to France, he was elected to the Royal Academy where he had much success. He was soon Rector of the Academy, and head of the Royal Gobelins Manufactory in 1755 and "First Painter to the King" in 1765. He was a favourite of the influential mistress of the king Mme de Pompadour, and excelled in painting many of her portraits. 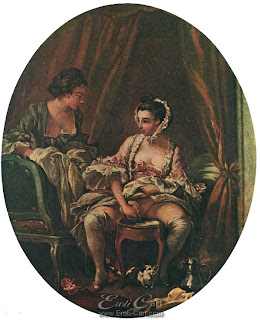 The oval shape of the painting places the viewer in the position of spy. The viewer is peeping through the keyhole. 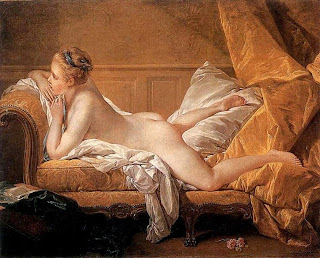 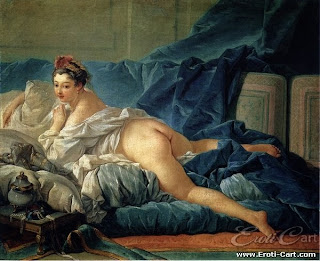 
Her gleaming, white flesh is highlighted by the luscious blue velvet. She waits, vulnerable and exposed for the male.


Many of Francois Boucher's early nudes were tangled up in mythological allegory to avoid criticism -- though as can be seen from his "Odalisques" and other works, Boucher transitioned to more open eroticism. 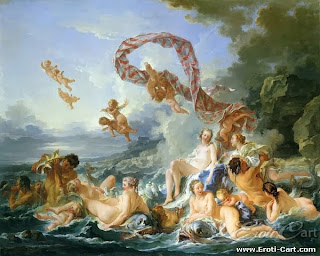 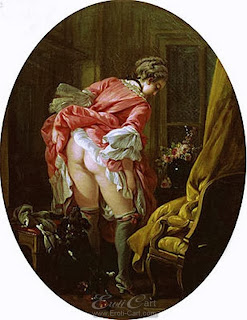 And this one, Raised Skirt; attributed to Boucher. I wonder if he did paint it? And if he didn’t -- well who did? Again the viewer is a spy -- another through the keyhole moment.

Is Boucher painting pornography or erotica? I don’t know, you have to decide that for yourself. I guess it depends on your own subjective interpretation of those words. I think that Boucher wanted to paint works that would arouse the viewer; perhaps even deprave -- just a little. Some of his images rely on fictional representations; narratives that were probably better known in the eighteenth century than they are today. Others are a blatant invasion of privacy, the women are displayed to titillate and are for public consumption in their most intimate moments.


This blog post has been compiled using sources from the web.