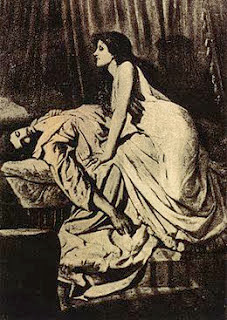 The beacon fires in the British towns and villages smouldered. They had smouldered since 1815 and the threat of French invasion. All through Napoleon’s incarceration on the British island of Saint Helena they smouldered and even with the death of Napoleon in 1821 the beacon fires never quite went out. The British are nervous and protective of their little island.

But invaders come in many guises and they find a variety of ways to break down resistance. It only took a tiny crack in a sturdy oak door and our popular culture was set ablaze and the beacon fires flared once more.

In 1897, Bram Stoker breathed on the smouldering kindling when he published his horror novel “Dracula”. The kindling had been stacked up for centuries, in the form of mythologies, rumours and stories; those creepy tales whispered about Vampires. Creatures of the night; the undead, seeking you out, to sink their fangs into your tender jugular and drink your blood; draining you. The stories go back thousands of years. Now, in 2013, the beacons have crossed oceans; the fires flame fiercely, proclaiming that the old stories are still being told and new tales are being written.

Stoker could have had no idea, that his short novel would precipitate a whole genre of writing that would hold sway on our collective imagination for decades.

Although Stoker did not invent the vampire, the novel's influence on the popularity of vampires has been singularly responsible for many theatrical, film and television interpretations throughout the 20th and 21st centuries.


From the beginning of history, vampire-like spirits and beings have been recorded. The Akhkharu were blood-sucking demons, written about back in the time of Sumer. We’re talking about 5,000 years BC. The ancient Chinese wrote about "hopping corpses" which would go around and consume a victim’s life essence (commonly known as chi). Even ancient Egyptian lore had a story where the goddess Sakhmet was consumed with bloodlust. From the earliest of times, vampire like beings have been prominent in folklore from several different cultures.

The most well-known versions of vampire myth are those of the Slavic and Romanian cultures, which, due to their proximity, are similar. And it is from Eastern Europe, that Stoker’s Count Dracula originates.

There are several reasons that a person may become a vampire, such as unnatural death, birth defects, or conception on certain days. Romanian legend gave rise to the belief that being bitten by a vampire would doom one to become a vampire after death. Both Slavic and Romanian myths hold the belief that, with the advent of a vampire, there would be deaths of livestock and family members of the vampire. The favoured way to kill a vampire in these two myths is by driving a stake through the heart, decapitation, and if necessary, dismemberment. Slavic and Romanian vampire myths have given rise to the most popular world-view of vampires.

But what’s the fascination? Why the endless retelling of this old story? Are we playing with danger from the safety of fiction? The horror of vampires is very real; I should know. I spent my adolescence terrified of them; especially Dracula. I invented bizarre little rituals to ward him off and keep me safe. Positioning on my left side as I lay in my bed, was paramount -- as was a convoluted prayer; a mantra that I would recite over and over again. Sleep would be a long time coming.

The success of “Dracula” spawned a distinctive vampire genre. The vampire is such a dominant figure in the horror genre that literary historian Susan Sellers places the current vampire myth in the "comparative safety of nightmare fantasy".

We relinquish control to the vampire. He swirls his cloak around his victim and bites. His teeth penetrate us. It’s a reconstructed image of the sexual act; in fact actual copulation seems tame, compared with what the vampire can do. The victim has no control over his ghastly lover. The victim flirts with death.

But it’s not just the Count we have to fear. He is scary, but his entourage of female vampires more so. Female vampires are predatory and take their pleasure where they will. Women who take control of the sex act itself! Victorian men -- beware! The ideal Victorian woman was chaste, innocent, a good mother. She definitely wasn’t sexually aggressive; a predator.

The three beautiful vampires, Jonathan Harker, Stoker’s narrator, encounters in Dracula’s castle, are both his dream and his nightmare—indeed, they embody both the dream and the nightmare of the Victorian male imagination in general. The weird sisters represent what the Victorian ideal stipulates women should not be—voluptuous and sexually aggressive—thus making their beauty both a promise of sexual fulfilment and a curse. These women offer Harker more sexual gratification in two paragraphs than his fiancée Mina does during the course of the entire novel. However, this sexual proficiency threatens to undermine the foundations of a male-dominated society by compromising men’s ability to reason and maintain control. For this reason, the sexually aggressive women in the novel must be destroyed.

“I was afraid to raise my eyelids, but looked out and saw perfectly under the lashes. The girl went on her knees, and bent over me, simply gloating. There was a deliberate voluptuousness which was both thrilling and repulsive, and as she arched her neck -- she actually licked her lips like an animal, till I could see in the moonlight, the moisture shining on the scarlet lips and on the red tongue as it lapped the white sharp teeth. Lower and lower went her head as the lips went below the range of my mouth and chin and seemed to fasten on my throat. Then she paused, and I could hear the churning sound of her tongue as it licked her teeth and lips, and I could feel the hot breath on my neck. Then the skin of my throat began to tingle as one's flesh does when the hand that is to tickle it approaches nearer, nearer. I could feel the soft, shivering touch of the lips on the super sensitive skin of my throat, and the hard dents of two sharp teeth, just touching and pausing there. I closed my eyes in languorous ecstasy and waited, waited with beating heart.”

The vampire lover is erotica personified. You relinquish control; you do nothing, other than give yourself up to the seduction.

Later in the novel, Count Dracula has made his way to England, and sets about possessing the upper-middle class Lucy.

Once infected by Dracula, Lucy becomes sexually overt and aggressive, and is portrayed as a monster and a social outcast. She feeds on children making her the maternal antithesis as well as a child molester. In order to rectify Lucy’s condition she is sexually overpowered by her fiancée, Holmwood; the scene is witnessed by Jonathan Harker and Van Helsing. Holmwood penetrates her to death with a stake through the chest, a staking which is openly sexual in interpretation;

“the thing in the coffin writhed; and a hideous, blood-curdling screech came from the opened red lips. The body shook and quivered and twisted in wild contortions; the sharp white teeth champed together till the lips were cut, and the mouth was smeared with a crimson foam.........He (Holmwood) looked like a figure of Thor as his untrembling arm rose and fell, driving deeper and deeper”

The killing of Lucy is a sort of legitimised gang rape, legitimised because the Victorian balance of sexual penetration from the female domain is back in its accepted station within the male domain.

The reasons for our fear of, and fascination with vampires change with the times we live in. To Stoker’s contemporaries, Count Dracula posed many threats to Victorian social, moral and political values: he changes virtuous women into beasts with ravenous sexual appetites; he is a foreigner who invades England and threatens English superiority; he is the embodiment of evil that can only be destroyed by reasserting the beliefs of traditional Christianity in an increasingly sceptical and secular age; he represents the fear of regression, a reversal of evolution, a return to our more primal animal state.

Think of the wealth of literature, film and television dramas that we wouldn’t have if Bram Stoker hadn’t written “Dracula.”

Perhaps they leave you cold -- I love them! I’m over my teenage angst about them. There’d be no exotic Lestat, from Ann Rice. No Hammer house of Horror. No vampires with a conscience; M.Christian wouldn’t have written his vampire novel; “Running Dry.” Neither would Janine Ashbless have written; "The Blood of the Martyrs" All wonderful stuff; my favourite writers digging around in my agonised psyche.