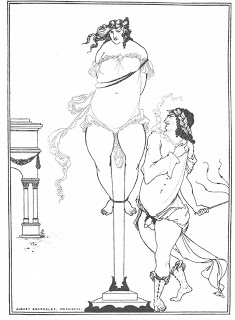 Ooh! Tie me up…tight…I can take it. Blindfold me; gag me. Show me to your friends as I sink passively into my humiliation. Tighter tighter. Blindfold me as well. Stuff my panties into my mouth so I can neither breathe nor speak. Then you can rescue me; untie me. By indulging me in this secret ritual, you show me that you love me.


Check out Aubrey Beardsley’s dirty picture. The woman is stuffed -- literally. She is being whipped; tormented by her master. Beardsley draws a degrading image; yet the woman does not struggle. She acquiesces. She is passive.


The passivity of women, portrayed in bondage images, struck me, as I put this piece together. It’s the contrast to the piece I put together a few weeks ago, on male bondage that I find intriguing. The men struggle furiously; violently against their tormentors. Their desperate cries can be heard through the canvases; they echo in the marble sculptures. The women do not cry out; they just take it.


But to get back to bondage; what’s going on? Why do folk want to tie each other up? Are they sexually strange? Is there such a thing as sexually strange? Or are the web sites coming up on the search engine, just tapping into a fetish that’s been going on for centuries, in those very old stories and paintings?


The bondage of Andromeda is a topic that has fascinated artists for centuries. 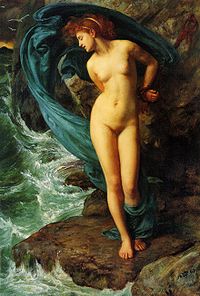 Edward Poynter paints Andromeda in 1869. She bows her head. She submits. Her hands are tied behind her. Her blue, silken robe, restrains her further.


In Greek mythology, Andromeda was the daughter of Cepheus and Cassiopeia, king and queen of the kingdom Ethiopia.
Her mother Cassiopeia bragged that she was more beautiful than the Nereids, the nymph-daughters of the sea god Nereus and often seen accompanying Poseidon. To punish the Queen for her arrogance, Poseidon, brother to Zeus and God of the Sea, sent the sea monster Cetus to ravage the coast of Ethiopia including the kingdom of the vain Queen. The desperate King consulted the Oracle of Zeus, who announced that no respite would be found until the king sacrificed his virgin daughter Andromeda to the monster. She was chained naked to a rock on the coast of Jaffa. Luckily, the hero, Perseus, was sailing by, fresh from slaying the Medusa. He fell in love with Andromeda and rescued her, just as she was about to be devoured by the sea monster. 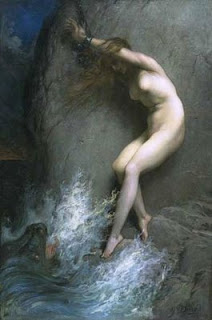 Gustave Dore paints Andromeda, also, in 1869. Dore paints her delicately. You can count her tiny toes. Her skin is fragile; translucent. She is a helpless victim. 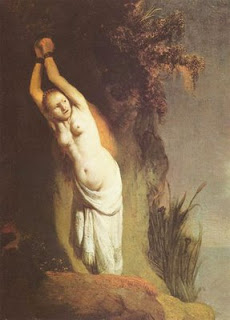 Rembrandt paints Andromeda in 1629. His Andromeda has a look of desperate fear on her face. Still, she does not struggle.

Tying up women is an ancient art, that is thriving today. You can read stories about it on the web; you can look at pictures. I got 715,000 hits just from typing in ‘female bondage’ to Google. Interestingly, I got twice as many hits for ‘male bondage.’ Why is that I wonder? But that’s maybe a topic for a different discussion. Although, any suggestions will be gratefully received!