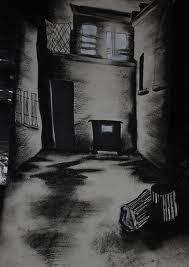 Walter took his cock out in the middle of the busy street. There was no warning or pretense; his cock just needed some air. Janet looked down, wide-eyed and covered her mouth. He took her elbow and pushed her down the nearest alley.

“This is our first date!” she squealed, but her face was lit up, her eyes trained on the thick cock in his fist.

He remained silent, because he didn’t know what to say besides the truth; he wanted to lift up that skirt, fuck her ass then never call her again. She was the kind of Ivy League girl who would never go on a second date with a deliveryman. He was good looking enough to land a first date, but that was always it.

“Wow.” She watched his cock grow and swell as his eyes met hers. “I’ve never done this.”
They always say that.
“Want to suck it?”
She nodded her head right away, a smile playing on her pretty pink lips.

She fell to her knees, backed against the moist brick building. She took him in her hand, licking hesitantly at his tip. He quickly grew frustrated with the lack of penetration.

“I’ll show you.” He reached down and urged her wider. He held her head and ruthlessly fucked her face. Her throat closed up on him, but he thrust past the resistance until she moaned, swallowing down his pre-cum.

She moaned and tried to back into him, but he held her still at the perfect height for his cock. Without further preparation, he slammed his cock through her tight opening. Walter liked it dry and tight, relishing in that strangled scream she let out. He felt her tight hole spasming around his cock as he held it deep, waiting for her to adjust to the intrusion.


“Walter! When can I see you again?” She called after him.

You can read my 500 words of erotica over at Nikki’s blog!