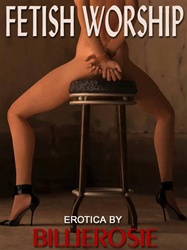 Adam watched through the peephole he’d drilled in the wall, as his girlfriend, Josie, sank her slender, naked body, down onto his best friend’s cock. Her strong, belly muscles rolled as her cunt stretched and clenched to accommodate him swallowing him whole. She threw back her head, exposing the lovely line of her throat, her large breasts thrust forward, her long, curly, dark brown hair tumbling over her shoulders. Her eyes were closed, as she savoured the tension of her internal muscles gripping his cock. Her lips were parted as if in ecstatic prayer. She arched her back and a tremor passed through her body.


Adam could sense, rather than hear, her long exhalation of relief. She quivered, and raised her arms, in supplication. She lifted her heavy mane of dark hair, as she raised and lowered her body taking the long, thick cock inside her. The man beneath her grinned and murmured some sort of endearment to her, as his pelvis pumped. He held out his arms; Josie smiled, reaching down to him linking their fingers. Adam bit his lip in annoyance. He’d said the bastard could fuck her, not have a conversation. Still, Josie fucked him, grinding her hips in a circular motion taking his cock up to the hilt.

Poor girl; she needed this. Adam rarely fucked her, he had other things on his mind. His slowly stroked his hard cock, as he looked lovingly at those other things now. Her beautiful, delicate feet. Her arched soles were uppermost. Adam ran his tongue over his dry lips as he imagined licking her curved instep. Her sweet toes were curled, anticipating the spasm of her first orgasm. He masturbated his erect cock.

Feet. For Adam, it had always been feet, for as long as he could remember. One of his earliest memories was of sitting underneath the big, oak table in his mother’s dining room, surrounded by ladies’ feet. He was just a toddler and his mother had no-one to leave him with at her monthly book club meetings. So he was allowed to crawl around under the table, as long as he didn’t make a noise. Adam never made a noise. He sat and listened to the women’s soft voices and laughter, as he sucked his thumb, lost in his own private heaven, gazing at, and inhaling the smell of women’s feet. Once he’d dared to touch a lady’s foot. He stroked the fine creamy skin curiously, marvelling at the delicate bones beneath. The lady had peeped down at the little boy beneath the table, and smiled.


Before their guests had arrived, he and Josie had lit candles around the sitting room. With the strong lighting turned off, the flickering light created a warm, intimate atmosphere. It cast delicate shadows beneath Josie’s breasts, over her tight belly and across her shoulder blades. She looked glorious in her naked abandon, like a crazed goddess.


It wasn’t the first time Adam had give her to his friends to fuck. But she’d never taken three men at a time before. She’d begged and pleaded with Adam for this to happen. It was her ultimate fantasy, she’d told him. Three men inside her at the same time. Adam didn’t get it. But if he understood anything, it was the primal need to fulfil a fantasy. It was the only way to meet an obsession. And the obsession was harmless, not hurting anyone.


If Adam had liked fucking as much as Josie did, theirs would be the perfect relationship. Even the scene before him didn’t turn him on. It didn’t disgust him either. As he watched his girlfriend being lusciously violated, he felt unmoved. What was feeding his huge erection, was Josie’s feet, clenched like claws, as she screamed out her orgasm.


Adam wondered how much cock she could take. She let out a long, low moan of what sounded like discomfort, as the thick cock slowly stretched her hole, pushing into her, inch by inch. The man behind her wrapped his arms around her. He caressed her breasts, and stroked her erect nipples. He pushed her hair aside and kissed and nibbled her neck. Then he took her quickly and roughly. Josie shrieked with shock as he slammed his thick cock into her, right up to the hilt. He snarled like a wild dog. Adam could hear her whimpers as the two men set up a rhythm fucking her. At first keeping perfect time with each other, then thrusting and pumping alternately. Despite his distaste, Adam considered whether the two guys fucking his girlfriend, could feel each other’s cocks through the delicate membrane separating her vagina from her rectum. That was totally sick, he thought.

Adam wondered how they had decided between them, who should have which hole. He’d wanted nothing to do with it. His friends already thought he was weird, giving his girlfriend to them for the evening. That was why he was watching through the peephole in the wall. They really would think he was a pervert, if he’d said he wanted to watch. Perhaps Josie had decided how it would be organised. It would be just like her Adam thought, to feign indifference, while carefully manipulating whose cock she wanted to go where. She was crushed now between the two men, just a toy for them to fuck. Adam didn’t care. But just let them touch her feet and he would kill them all.

Slender ankles, legs crossed, legs uncrossed. A foot tapping. Strappy sandals and painted toenails during the summer. Victorian laces and high boots in the winter. Adam had learnt very early in his life, that anything to do with ladies’ feet turned him on. He recalled sitting, mesmerized, studying a fine, delicate golden chain around an equally delicate ankle. Once, one of his mother’s friends had worn a silver toe ring, with a tiny bell that tinkled when she moved. Dirty feet, clean feet, Adam wasn’t prejudiced. Even ugly feet held a fascination for him.


Speared on two cocks, Josie raised herself with difficulty onto her forearms, her mouth wide open, gasping, as the two men pumped her holes. It meant her shoulders were almost taking the full weight of the man humping her ass. For a slight woman, she was very strong. Perhaps the debauchery was pumping her with adrenalin, giving her power. A third man knelt before her, his cock hard, and ready to slide between her parted lips. She accepted him gratefully, almost as if she was receiving a benediction. The third cock was like the confirmation of a blessing to her, something holy. She closed her eyes. She really did look as if she were in a state of bliss. She made little animalistic whimpering noises as his cock pushed into her throat.


When he was much older, Adam had wondered if those alluring times, beneath his mother’s dining table had formed his fetish. Or could one be been born with a fascination for women’s feet? What weird gene could have been responsible? He recalled a summer, some years later, his sisters and their friends had worn bikinis at the swimming pool. His sister’s best friend, Susie, had the most beautiful feet Adam had seen in his short life. High arches and delicately carved ankles. Small perfectly formed toes. She’d painted her nails a pretty, pearly pink. Adam could have written poetry to Susie’s feet. He was still young enough to get away with stroking and tickling her feet. She’d giggled and teased him. Had he felt arousal even then? He remembered a sublime allure as he’d traced his fingers between her delicate toes. She had drops of water on her feet from the swimming pool. Adam had wanted to lap at them. Pretend he was Susie’s little, pet dog. But even then, in his innocence, he’d known that he’d be going too far. The others would either laugh at him, or be disgusted. That was the beginning of Adam’s secret. No one must ever find him out.


The orgy was working itself into a frenzy. Their bodies writhing, rutting like animals. Worse than animals, Adam thought. He could tell Josie was close to coming again. Her body had tightened and she was in perfect rhythm with the three men pumping her holes. The man in her throat pulled back and shot his spunk into her mouth. Josie gulped at him, trying not to spill a drop, but her orgasm surged through her, making her lose concentration, and she drooled spunk and saliva from the corners of her mouth. The men in her ass and cunt, climaxed into her more or less at the same time. All four collapsed on the floor, lungs heaving, gasping for breath, laughing hysterically. A gross tangle of limbs and genitalia. Once again Adam was annoyed. As far as he was concerned, fucking was purely functional. Like getting rid of an itch. It wasn’t supposed to be fun.


At last the three friends dressed and left. Adam left his post at the peephole and joined Josie in the sitting room. He didn’t understand why, but he was angry with her. He decided to sulk a little, to pay her out for enjoying herself without him. Then he felt mean. He knew it was pointless. He loved her so much and she was the only woman he’d ever met, who knew exactly how to please him.


He sat on the sofa and Josie, still naked and stinking of sex, sat at his feet. She lay back, her upper body on the floor, her lovely toes wriggling in his lap. Adam ran his fingers over her glorious feet. He closed his eyes. He would know Josie’s feet anywhere, even if he were blind. He raised one foot to his mouth and sucked on her toes. Such delicate little toes. Adam licked in between them. Josie giggled. He was tickling her. He smiled down at her. His cock was agonisingly huge. He ached right through to his balls and groin, with the need to cum.


She curved both feet around his cock and masturbated him roughly. Breathing rasped, fists clenched jaw set.


And at last, at the end of the long evening, Adam came, jerking his spunk over Josie’s perfect little toes.