THE TALE OF LOT AND HIS DAUGHTERS 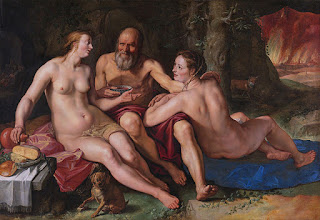 
Once upon a time, long, long ago there was a father and his two beautiful daughters. The father’s wife had recently died. Apart from his two daughters, the father was alone in the world. The two daughters got their father drunk and seduced him. Both girls became pregnant and gave birth to sons. No-one seemed to mind; it wasn’t such a big deal.

Even to our media hardened ears the story is shocking. You can just imagine the newspaper headlines if it were to happen today.

Yet, the events happened millennia ago. The story is from the Bible; The Genesis 19 account of father and daughters ensuring the survival of the human species through an incestual act; it is an archetypal story woven into the very fabric of changing social norms and psychological dynamics unfolding over several millennia.


Lot and his daughters, Artemisia Gentileschi  1640 Toledo Museum of Art


The acts of incest are the eventual outcome of the tale of Sodom and Gomorrah; God has decided to destroy the city, because of the corrupt, lewd and licentious behaviour of the inhabitants. Lot, is the one good man in the whole of the city and he offers hospitality to two angels who come to the city. A crowd descends on Lot’s house, demanding the opportunity to rape the (male) angels. Lot tries to bargain with the mob, telling the men that they can have sex with his two virgin daughters instead, but it is the celestial visitors that the crowd lust after. These were dangerous times and Lot is dragged back inside his house for his own safety.

So God destroys the cities of Sodom and Gomorrah with fire and brimstone; Lot, and his family are the only people permitted to escape. Lot’s wife looks back (against God’s command)  to see the city burning and she is turned into a pillar of salt. Lot and his daughters end up taking refuge in a cave where the girls decide to get their father drunk and have sex with him so that he can father their children.

Why did the daughters do it? From a feminist, and twenty first century point of view, it’s a subversive twisting of the reality of incestuous abuse. In the tale of Lot and his daughters, the victims are turned into the victimizers, and the male authority figure is absolved through his drunkenness, which the daughters had initiated, of responsibility. 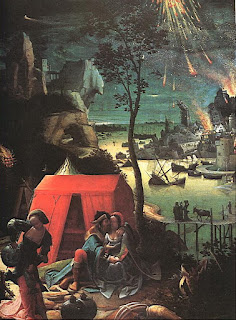 
Lot's daughters committed incest because they believed that they and their father were the sole survivors of universal destruction; humankind, they thought, depended on their breaking taboo by procreating with their father. The Biblical manuscript gives no indication that Lot initiated this event, nor does it suggest his daughters were drawn to him for any other reason than their desire for children. The turning of Lot’s wife into a pillar of salt,  (killing her off) is the story teller’s device to free Lot from an aging wife; her days of fertility are over.

In the earlier part of the narrative, before God has destroyed the cities, Lot has offered his daughters to the men of Sodom to protect his male guests. Lot’s action is an indicator of the idea that the most valuable thing about a woman is her desirability to men. 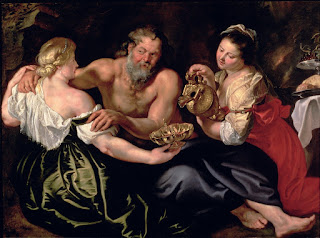 
Even today, in the enlightened days of the twenty first century, it is a message that far too many daughters continue to get; a girl’s capacity to inspire longing is her most valuable asset.

A feminist reading of the tale would focus on how the women are defined. They are only defined in relation to Lot. They are Lot’s possession; Lot’s things -- ownership means that Lot can do with them as he chooses.

Also a feminist reading would point out the fact that neither Lot’s wife, not his daughters, are named.

Psychoanalytical theory teaches us that without a name ‘it’ is just a thing -- in naming it, ‘it’ becomes the subject. The subject now has an identity -- in not giving the women names, the Old Testament writers keep the women as ciphers. Lot has a name and identity; the reader knows him as a real character. The women are unnamed; they are simply female. They have no presence in the world.

We cannot, must not judge the past by the ideals of the twenty first century. But it is interesting that the act of incest was taboo and just as abhorrent to people living so long ago, as it is to us now.

Here is the story from the King James Bible.