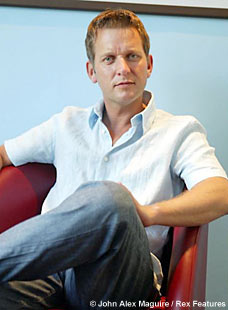 There’s a curious phenomenon in the UK. It happens on a weekday at 9.25am. Scroll through the channels at that time and you’ll find the Jeremy Kyle show on channel three. It is a talk show, based on the Jerry Springer model in the US. People go on the show to pour their hearts out on national television and Jeremy solves their predicament; at least that’s the general idea.

Those of you in the US will not have heard of Jeremy Kyle. Just substitute his name with Jerry Springer and you will get what I am talking about.

“Is he my real father?” or “He left me for my best friend and got her pregnant”. “My partner is a drug addict,” “my mother is having sex with a 16 year old boy,” “who stole Grandma’s savings?” These are examples of some of the predicaments that Jeremy is asked to solve.

The guests ask Jeremy for DNA tests, polygraph tests; Jeremy obliges. He is a bastion for the nation. A defender of morality. His suggestion for the cure of unwanted, or surprise pregnancy, is to; “put something on the end of it.” His statement is crude, but as he says; “I’m only being honest.” You can’t fault Jeremy’s wisdom.

The scenario always follows the same  format. Jeremy introduces his guest, let’s call him Clyde, and they talk through Clyde’s dilemma. Jeremy is softly spoken; sympathetic. “If she has a reputation, you are bound to doubt whether you’re the child’s father.” They go to a break; “Don’t go changing! When we come back, we’ll see what Michelle has to say!”

Clyde is about 19, Michelle, his sexual partner for just a few weeks, is a year younger.

Ad break over. Enter Michelle, cursing, furious. She swings a blow at Clyde. The heavies rush on stage and push Michelle, kicking and screaming onto a seat, well away from Clyde. Michelle is weeping now; Jeremy asks William, the show’s dogsbody, for some tissues. Michelle blows her nose and directs a litany of profanities at Clyde. Jeremy picks up on one. Clyde has “slept” with a variety of women. (I have an issue with the euphemism “slept”. Say it how it is and call it “had sex!”) But Clyde is obviously proud of his sexual prowess, and can’t suppress a smirk.

Having allowed Michelle to embarrass herself in front of the nation, Jeremy now proceeds to take Clyde apart. The dissection  is painful; it’s meant to be.

“You were complaining about Michelle’s reputation! You’ve had all of these women, what does that make you?”

“He slept with Janine in a pub toilet,” yells Michelle. (There we go again, that word “slept”) “And I was a virgin when I slept with him! He knew I was, he told me I couldn’t get pregnant on my first time!”

A few other guests are brought on. Michelle’s mum, Clyde’s mum. Clyde’s best friend Joe, who vouches for Michelle being a slapper.
Then finally, finally, the DNA test. “Of course you’re the child’s biological father!” Jeremy yells at Clyde.
“Told you!” Michelle smirks, hugging her mum.
“So now what are you going to do?” asks Jeremy of Clyde.
“Well, I’ll support them,” says Clyde, blushingly. He’s obviously going to take fatherhood seriously.
“How are you going to do that?” asks Jeremy. “Got a job have you?”
“No, but I’m looking.”
“So who’s going to pay in the meantime?”
“I’ll pay it out of my dole.”
“You mean I, and every other tax payer in the UK will pay for your offspring, just because you were too lazy to put something on the end of it? ( I told you Jeremy likes to say that!)
Exit, Michelle, Michelle’s mum, Clyde and his mum and Joe for family mediation -- a big round of applause from the audience.

Then another family is ritually humiliated as they delve into the consternation of “who stole Grandma’s life savings?”
Jeremy challenges and castigates each guest as they come on stage. “Whoever did this is the lowest of the low,” he declares. “To steal from a 98 year old woman.” Each family member has their results  of the polygraph read out. Cheers from the audience as each person is declared truthful -- then finally, and Jeremy says he could have told them whom it was from the moment she walked on stage -- it’s the eldest sister, Moira, she who has been accusing everyone else. Heckles, boos and hisses from the audience. Moira says that the polygraph must be wrong. Jeremy says it is never wrong. (Not actually true. That’s why the UK police don’t use it, because it can give false readings.)

So that’s pretty much how it goes. The template is the same for a variety of scenarios. So this is good, isn’t it? How can it possibly be bad? Jeremy helps people put right their transgressions, offers help to drug addicts and alcoholics and unites family members who have lost each other.

“According to his bosses at ITV1 the eponymous host is a 'talk show star' with a 'unique ability to deliver strong advice with complete compassion to the people who share their problems with him'.

“They also love him because he delivers viewing figures in excess of 1.5 million, dominates the morning slot across the channels and could churn out programmes until kingdom come.

“Others, however, are less impressed by Jeremy Kyle's contribution to British broadcasting. According to a long line of critics, the 41-year old former regional radio DJ is an utterly ruthless and cynical showman who exploits the vulnerable in the hunt for television ratings.

“The most frequently aired criticism of the show is that it is cruelly exploitative, taking advantage of vulnerable people who are paraded and goaded to perform in front of the cameras for the purposes of entertainment. The result, goes the argument, is bargain-basement television that appeals to the basest instincts of the audience. Of course, there is no doubt that this formula can result in compelling viewing, but critics would argue that just because people will slow down and crane their necks to look at the aftermath of a car crash, that doesn't make it right.

“For the benefit of anyone who hasn't had the chance to tune in to Kyle's daily offerings on ITV, consider the contents of this show.

“The words 'I think you should abort your baby!' flash on the screen as Kyle, spick and span in a suit, his brow permanently furrowed, bounces into view: 'Welcome to the Jeremy Kyle Show. We never treat any story lightly but our next guests are facing an issue that will split the audience and this country down the middle.'

“Chris and Charlotte, a couple in their 20s, troop on to the stage. We learn that they have been together for three years and have a 22-month-old son, and that Charlotte is pregnant again.

“The basic premise is that Chris doesn't want her to have the child because, 'it isn't fair to bring a kid into this environment where the parents are totally fighting'. Charlotte disagrees but, pressed by Kyle, reveals that her partner has been in prison, that he has been violent to her and that on one occasion he spat in her face and yelled: 'I hope your mum dies of cancer.' (In a telling aside, she adds that Chris only came on the show because 'they (the Kyle show) paid for his hotel room and his train fare'.
“Charlotte is then joined on stage by a friend called Chloe from whom we learn, in a moment that surely should have been cut from the pre-recorded programme, that Chris only learned of the pregnancy when he 'grabbed Charlotte’s boob and milk came out'.

“As passions inevitably rise, swear words are bleeped out and threats fly back and forth. Jeremy Kyle, meanwhile, swings between pretending to be 'above' the row and winding up the guests further: 'I am not going to take a stance because there are pro-lifers and people for abortion - but if you used contraception in the first place you wouldn't be in this situation.'

“But what does it all achieve? Not much. After their 15 minutes in the spotlight, Jeremy Kyle reaches the obvious conclusion that there is 'not much love between them', attacks them both for being 'senseless and thoughtless' and sends them on their way with the offer of some mediation. Problem solved.”
(Passages in quotes from Tom Rawstorne writing in the Daily Mail 28th July 2006)


Fortunately going on the Jeremy Kyle show isn’t compulsory. So why do people do it? Is it really just about that fifteen minutes of fame -- getting their faces on television?
Are they people whose life experience is so tilted towards invisibility that talk shows like Jeremy Kyle are a big shot of visibility? It looks, if only for a moment, that the guest owns this space.

It does not seem that “talk shows” like Jeremy Kyle’s, Jerry Springer’s or Oprah’s are interested in reflecting any sort of social reality, rather they highlight and trivialise society’s insatiable appetite for profit and fun.

But to return to an earlier question that I posed. How can talk shows, and it is primarily Jeremy Kyle that I am talking about, possibly be bad? Psychoanalysis tells us to talk. Talk about everything, our childhood, our crimes, our sex lives. So what’s the problem? There’s just something about the concept of people spilling their guts on national television that makes me squirm. I watched a whole week of Jeremy Kyle, because I knew that I was going to put this post together; thankfully, now it’s done, I don’t have to watch it anymore. Jeremy Kyle comes close to shedding tears for the people whose secrets he extracts, while simultaneously attacking them for revealing those same secrets. The line between the public and the private shifts strangely with a circus like gusto, in front of millions of people.

So, do we watch Jeremy Kyle for a laugh or for a jolt of recognition? There is certainly a sort of horrid fascination; like somebody defecating in public. Perhaps we really do deserve Jeremy Kyle. Michel Foucault talked about “the incitement to discourse”, that incessant demand that we have to tell everything.


Yes, Jeremy Kyle does exploit his guests, but he is providing a space for voice and visibility, albeit in a hollow, distorted way. The talk show tells us about people crazily in need of recognition -- even if it has to be achieved in an insanely loopy manner.

Defenders of the Jeremy Kyle show argue about democracy at work, flawed democracy, but democracy nonetheless, giving voice to ordinary folk, the disenfranchised, those who do not feel entitled to speak and the socially marginalized.

Ah, I see now, talk shows are not about entertainment for the masses, a 21st century equivalent of the Roman colosseum where the gladiators fought and performed  for the jeering crowd. Talk shows in general, and Jeremy Kyle in particular, are all about altruism.