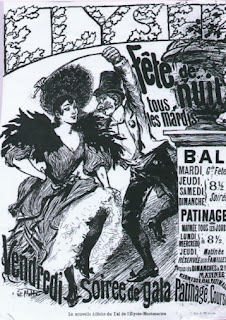 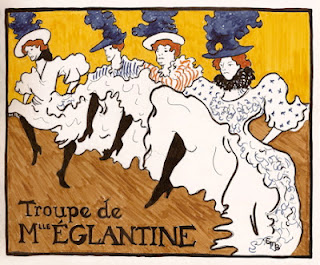 And the music! Rossini called Offenbach 'The Mozart of the Champs Elysées,’ for a very good reason. Offenbach’s music is sexy, funny and subversive.

“A lot of people think Offenbach invented the cancan. Also some "clever" people think the music was just used for the cancan, and he didn't intend it for that purpose, but that's not true. He wrote the music for a dance that already existed.
He was writing a pop tune for a popular dance, deliberately so he could sell lots of sheet music”. 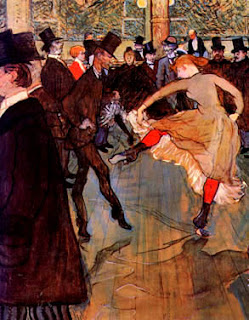 Placing popular music with products; it is something that these days we see all the time. But aggressive marketing was alive and kicking in the nineteenth century.

“A lot of people are very confused by the history of the cancan, and when they hear that it first appeared in the 1830s, they imagine that something like the all-female, chorus-line style existed then, when it didn't.” 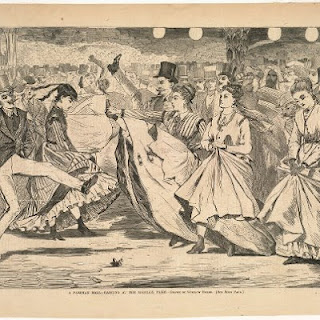 “Drawing by Winslow Homer of cancan dancers in Paris in 1867. The cancan was at this time a high-kicking dance for both men and women on a dance floor. These particular dancers are putting on a display for the customers at the Bal Mabille.”


But what of negative responses to the cancan? The dance was seen as a site of desire, centering on the shocking sight of seemingly uncontrollable female bodies.

“There were disapproving voices, particularly in the early years - but these were similar to the criticism of the waltz, which you included in your blog. The cancan involved even more bodily contact between the sexes, and also resulted in the women being out of breath and thus out of control, which was considered quite improper. But actually many of the comments in the press celebrated the liberated nature of the cancan and the excitement of the performance. The dancers tended to be written about much like today's celebrities. The cancan probably avoided too much disapproval because it came to the fore in a period of looser moral standards: the Second Empire.” 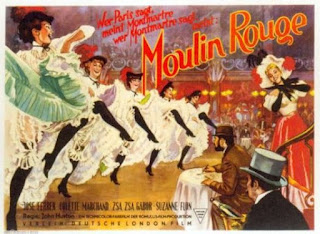 “The cancan, the can-can, the French cancan - whatever you want to call it  – first appeared in Paris in the 1830s. But the original cancan bore little resemblance to the choreographed, chorus-line stage dance that we know today. In fact, the original cancan dancers were men. And even when women joined in, in those early days they didn't lift up their skirts in the way we are familiar with today.” 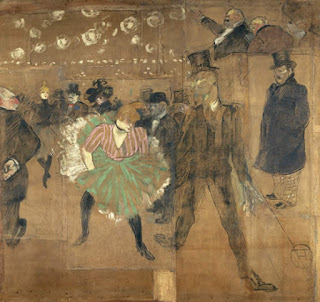 “I'm David Price, a writer, editor, and lecturer, who back in the 1990s completed a book on this dance that has such a colourful history. This original book was actually published in 1998, and is now out of print, but I have revised it with new sections and lots more illustrations. This website is designed to give a flavour of what the revised book is like, and to present some of the fantastic photos that I collected for it. See some photos from the book here.

The first cancan was in fact a ballroom dance, based on a popular dance of the time, the galop. When I say "ballroom", I don't mean the kind you find in a stately home or in a country house. I'm talking about the sort of dancehall frequented by the working classes and farm labourers. A number of these could be found on the outskirts of Paris in the 1830s, and one of them – the Grande Chaumière, was where the cancan was born.

It went through a number of phases in its development, and the chorus-line style of cancan as performed by a group of young women, carefully choreographed to leave the impression of a degree of spontaneity, only really appeared in the 1920s. Throughout the 19th century, the dance was mainly a vehicle for individual stars, each of whom had her own trademark. These cancan stars continued to perform on a dance floor, as if enjoying a fun night out, but their male partners were very much in a secondary role, acting as a foil.

There are numerous myths associated with this one dance, for example: that the composer Offenbach invented it for his operetta Orpheus in the Underworld; that it was created at the Moulin Rouge; that the dancers were all prostitutes; that it was frequently danced without knickers; or that it was officially banned by the authorities in France, Britain or the U.S.A. None of these is absolutely true, but, as with most myths, there is some truth in all of them, even if only a grain”.
. From the introduction to David Price’s book; “Cancan!”


Passages in quotes from an online dialogue with author, David Price