THE WHYS AND WHEREFORES OF WRITING SMUT: P.M.WHITE

I am thrilled that my wonderful writer friend, P.M.White has written this essay for my blog. P.M.White turns the matter over and over in his mind, of why he, and we all write smut. Read on! 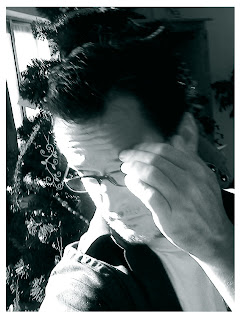 Writers usually want to write. If not, then they like to read. If not either, they want drinks, which usually goes hand in hand with a desire to get laid. Besides the aforementioned partner, writers typically like a degree of solitude, even during the holidays.
It’s about two days after Christmas as I write this. I have no idea if I’ll be social for New Year’s. I went to one Christmas party, which is on par with the amount of revelry I experienced last year. Most of my time is spent writing, both in my day job and in my personal life. This means I like to sit in my own little world, stare at a computer screen and listen to old punk albums without saying much beyond incoherent mumbles that help further the creative process.
As I write this I’m wearing sweat pants that are a little too large for me, a white t-shirt that I slept in, and slip-on rubber shoes that I wear around the house. A space heater is usually aimed at my feet while I plunk my fingers on the keys. My hair, which I’m growing out in preparation for my mid-life crisis, has not felt a brush or comb since yesterday morning. I know there are plenty of writers who get ready before they write, but I’m not one of them. I do need coffee if it’s morning, but otherwise that's it. On occasion I need whiskey.
What I’m getting at is writers tend to be a very reclusive bunch. At my day job, I have to interview people and attend meetings before I can write. At night, or early in the morning like today, I write from a home office with only my old dog as company. So for a lot of my time, I am sequestered away with a keyboard. There’s a reason why writers spend so much time alone. Many of us are socially awkward. Or we’re made that way by our chosen profession. Either way, crowds can be scary. Even if they’re composed of friends.
Case in point is the Christmas party I attended with my girlfriend. A wonderful crowd attended the gathering – called a white elephant gift exchange/ game night/ potluck. Their were single folk, gay couples, straight couples and all in between. Everyone had a great time. My girlfriend ended up with a giant pink calculator that makes the user feel they've decreased in size by fifty percent. A number of the party-goers, including a sprinkling of the non-straight guys, lusted after that pink calculator. They also lusted after a painting I contributed to the shenanigans. It became one of the most fought-over gifts for the whole exchange.
White elephant parties, for those who don't know, means you can steal the present of someone after they have drawn their number and opened their gift. When your number comes up you can open a new gift or steal someone else's. My painting was stolen often.
Later someone suggested I was just as popular to a number of the gay men as my painting. Did they want to oil up my cock and watch it spurt? Did they want to put theirs in my mouth? Possibly, but it wasn't the thought of homo-erotic sex that makes me feel awkward socially. I write erotica. I think about sex all the time and either want to have it or I want to write it. So far I have never done both at the same time, but being hit on isn't a big deal.
As it always does, writing erotica became a conversation piece at the party for those that learned of my profession. Many thought this meant, surprise surprise, that I went down on men all the time, women as well, and probably had no problem blowing a guy while pounding a woman. While I neither confirmed nor denied my preferences, I did say it meant only that I enjoy sex and writing about it. For me, the awkwardness comes in speaking aloud, in not having any control of the next sentence that comes out of someone's mouth, of wanting to be friendly, but feeling a rock in the pit of my stomach. I often wonder if awkwardness of this sort had something to do with why Bukowski behaved like such an ass. Most writers enjoy writing because they're hermits. They don't want to be bothered by the real world. It doesn't fit with the world of their words, the world they want to be in.
As I write this, I realize that I have now shared more of myself by typing than I shared to those at the party. In words, the awkwardness all but vanishes. There, I'm ready for homo-erotic adventures and bi-sexual orgies galore, but in the real world I'm ready only for another cup of coffee. Maybe with a little Irish crème in it.

PM White is the author of ‘Horror Manor Part 1: Eyeball Man’ available through Sizzler Editions and on Amazon. His short stories have appeared in ‘Best S/M 3,’ ‘Sex in San Francisco’ and most recently in the ‘Pirate Booty’ anthology. He can be found on Facebook and here.
Posted by billierosie at 02:54