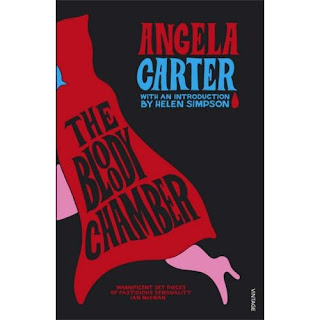 It’s been a few years now, since I discovered Angela Carter. It was on a course about adaptations of novels into film. Fairly recently, Neil Jordan had released “The Company of Wolves,” from the Angela Carter short story of the same name. It’s a strange, haunting story -- a re-telling, if you like of the tale of “Little Red Riding Hood.”

Angela Carter's re-writes of traditional European folk/fairy tales bring with them dark aspects of the human psyche that would have existed in the oral tradition, but which became sanitised when written down in the 18th / 19th centuries as parables of instruction for children.

Angela Carter said of the “Bloody Chamber” collection. "My intention was not to do 'versions' or, as the American edition of the book said, horribly, 'adult' fairy tales, but to extract the latent content from the traditional stories and to use it as the beginnings of new stories."

“Angela Carter knew from the start that she was drawn to "Gothic tales, cruel tales, tales of wonder, tales of terror, fabulous narratives that deal directly with the imagery of the unconscious". She drew a sharp distinction between what she described as "those fragments of epiphanic experience which are the type of the 20th-century story", and the "ornate, unnatural" style and symbolism of her favoured form, the tale. When, in her second collection, “The Bloody Chamber“, she continued in this Gothic mode but with narratives suggested by traditional west European fairy tales, she found she had conjured up an exotic new hybrid that would carry her voice to a wider audience than it had reached before.”

The unity of the book, and the sustaining of the literary atmosphere, is created through the varied textual forms that Angela Carter chooses to chronicle. So, for her examinations here she hand-picks legends that have the strongest roots in sensuality... so we have vampirism, werewolves, feral children, and jungle beasts beguiling and defiling a succession of young women in a series of deeply emotional narrative episodes. Angela Carter has a grasp of poetic use of language and she has deft storytelling capabilities. Needless to say, the stories featured drip with a dense, erotic atmosphere that is occasionally overwhelming... though there is also a strong underlining of horror, tension and mystery; with the reader free to read between the lines and decode the various clues that Angela Carter layers within her work.

In “The Bloody Chamber” collection, Little Red Riding Hood (The Company of Wolves) is not saved by the woodcutter, but instead tames the beast by getting naked and giving vent to her awakening sexuality. Most of the stories in the collection focus on a girl on the cusp of womanhood, who steps off the path and is rewarded with the discovery of a sexuality that is not repressively phallocentric.

“The little girl burst out laughing, she knew she was nobody’s meat.”

“She will lay his fearful head on her lap and she will pick out the lice from his pelt and perhaps she will put the lice into her mouth and eat them, as he will bid her, as she would do in a savage marriage ceremony.”

In The Tiger’s Bride, Angela Carter retells the story of “Beauty and the Beast.” This is no Disney version. There isn’t a feeling of all being well, or happy ever after in this tale. But there is a sort of contentment. The heroine, in discovering the truth about the Beast, discovers the truth about herself.

This story takes us on a beautiful, shocking and often frightening journey into realms of innocence and sensuality that few literary works can equate. Angela Carter’s writing, here merges with poetry. Her words are economic, yet still she gives us vivid pictures.

“The candles dropped hot, acrid gouts of wax on my bare shoulders.”

Here she describes the trappings of luxury, the display of rich scenery in rich language.

“The Beast wears a garment of Ottoman design, a loose, dull purple gown with gold embroidery round the neck that falls from his shoulders to conceal his feet. The feet of the chair he sits in are handsomely clawed. He hides his hands in his ample sleeves.”
This is dark, musky writing. Is it bestiality? Perhaps. Or a wish fulfilment story for Furries?

The heroine describes her encounter with the Beast.

“He dragged himself closer and closer to me, until I felt the harsh velvet of his head against my hand, then a tongue, abrasive as sandpaper. ‘He will lick the skin off me!’
And each stroke of his tongue ripped off skin after successive skin, all the skins of a life in the world, and left behind a nascent patina of shining hairs. My earrings turned back to water and trickled down my shoulders; I shrugged the drops off my beautiful fur.”
In Angela Carter’s Beauty and the Beast, Beauty is transformed by Beast, not the other way round.

“The unnamed first-person heroine of The Bloody Chamber's title story appears at first to be a Justine-like sacrificial virgin in a white dress, routinely destined for immolation; however, she changes during the narrative, and finishes by escaping her inheritance - female masochism as a modus vivendi (and morendi) - after a full-scale survey of its temptations. The story is set in a castle on sea-girt Mont St Michel in fin-de-siècle France, with more than a nod to De Sade's cannibal Minski and his lake-surrounded castle with its torture chamber and captive virgins.

This story is also a version of the Bluebeard fairy tale that appeared in Charles Perrault's collection, where a new bride unlocks the forbidden room in her husband's castle to find the murdered corpses of his former wives. Perrault drew the moral that female curiosity leads to retribution, though in the France of his time, where death in childbirth was commonplace and four-fifths of the resultant widowers remarried, the bloody chamber might surely have been seen as the womb. In Angela Carter's 20th-century version, the menace is located not in the perils of childbirth, but in the darker side of hetero-sexuality, in sadomasochism and the idea of fatal passion.

Nearly all her writing is strikingly full of cultural and intertextual references, but this story is extremely so. It is an artfully constructed edifice of signs and allusions and clues. The Marquis, as he is called (suggesting, of course, the Marquis de Sade), is a parodic evil aesthete and voluptuary with his monocle and beard, his gifts of marrons glacés and hothouse flowers, and his penchant for quoting the juicier bits of Baudelaire and De Sade.

On the walls of his castle hang paintings of dead women by Moreau, Ensor and Gauguin; he listens to Wagner (specifically "Liebestod" - "love-death" - in Tristan und Isolde); he smokes Romeo y Julieta cigars "fat as a baby's arm"; his library is stocked with graphically- described sadistic pornography and his dungeon chamber with mutilated corpses and itemised instruments of torture.

In this heavily perfumed story, the Marquis' smell of spiced leather, Cuir de Russie, is referred to more than half a dozen times, reverting at the end "to the elements of flayed hide and excrement of which it was composed". Descriptions of scented lilies, "cobraheaded, funereal", smelling of "pampered flesh", appear nine times, their fat stems like "dismembered arms". The words "immolation," "impalement", "martyr" and "sacrifice" occur, motif-like, at regular intervals but, abruptly - rather too abruptly for some critics - on the last two pages of this novella-length story the heroine/victim is rescued from decapitation by the sudden arrival of her pistol-toting maman, who puts a bullet through the Marquis' head. Her fate is not immutable after all; she discovers that her future looks quite different now that she has escaped from the old story and is learning to sing a new song.


This book takes us on a beautiful, shocking and often frightening journey into realms of innocence and sensuality that few literary works can equate. Angela Carter’s talent as a storyteller and as a poet must not be under estimated. But that very talent is something of a sad reminder of just what a great talent we’ve lost. Thankfully, this book should succeed in opening our eyes to her genius, since it brilliantly demonstrates her various creative skills mirrored within each of these separate stories.
Posted by billierosie at 06:07