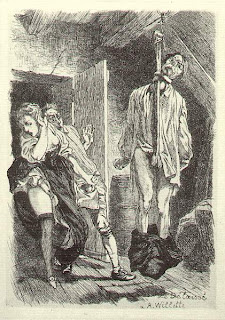 From Wikipedia, the free encyclopaedia.

"The carotid arteries (on either side of the neck) carry oxygen-rich blood from the heart to the brain. When these are compressed, as in strangulation or hanging, the sudden loss of oxygen to the brain and the accumulation of carbon dioxide can increase feelings of giddiness, light-headedness, and pleasure, all of which will heighten masturbatory sensations."

Author George Shuman describes the effect as such "When the brain is deprived of oxygen, it induces a lucid, semi-hallucinogenic state called hypoxia. Combined with orgasm, the rush is said to be no less powerful than cocaine, and highly addictive".

Concerning hallucinogenic states brought about by chronic hypoxia, Dr. E L Lloyd notes that they may be similar to the hallucinations experienced by climbers at altitude. He further notes that no such state occurs in hypoxia brought about by sudden aircraft decompression at altitude. These findings suggest to him that they do not arrive purely from a lack of oxygen. Upon examining the studies on hypoxia he found that "abnormalities in the cerebral neurochemistry involving one or more of the interconnected neurotransmitters, dopamine, 5-hydroxytryptamine, and β-endorphin had been reported in all the conditions associated with hallucinations."

Historically, the practice of autoerotic asphyxiation has been documented since the early 17th century. It was first used as a treatment for erectile dysfunction.[5] The idea for this most likely came from subjects who were executed by hanging. Observers at public hangings noted male victims developed an erection, sometimes remaining after death (death erection), and occasionally ejaculated when being hanged. Note that, however, ejaculation occurs in hanging victims after death because of disseminated muscle relaxation; this is a different mechanism from that sought by AEA (autoerotic asphyxiation) practitioners.

Various methods are used to achieve the level of oxygen depletion needed, such as a hanging, suffocation with a plastic bag over the head, self-strangulation such as with a ligature, gas or volatile solvents, chest compression, or some combination of these. Sometimes, complicated devices are used to produce the desired effects. The practice can be dangerous even if performed with care and has resulted in a significant number of accidental deaths. Uva (1995) writes “Estimates of the mortality rate range of autoerotic asphyxia between 250 to 1000 deaths per year in the United States.” Cases have also been reported in Scandinavia and in Germany.


Deaths often occur when the loss of consciousness caused by partial asphyxia leads to loss of control over the means of strangulation, resulting in continued asphyxia and death. While often asphyxiophilia is incorporated into sex with a partner, others enjoy this behaviour by themselves, making it potentially more difficult to get out of dangerous situations. Victims are often found to have rigged some sort of "rescue mechanism" that has not worked in the way they anticipated as they lost consciousness.

Autoerotic asphyxiation has at times been incorrectly diagnosed as murder and especially so when a partner is present. Some hospitals have teaching units specifically designed to educate doctors in the correct diagnosis of the condition.
Lawyers and insurance companies have brought cases to the attention of clinicians because some life insurance claims are payable in the event of accidental death, but not suicide.

handbag for a number of days. The case caused a sensation in 1930s Japan and has

remained one of the most famous Japanese murder cases of all time.


Albert Dekker, stage and screen actor, was found in 1968 with his body graffitized

and a noose around his neck in his bathroom.

asphyxiation combined with self-bondage in 1994.

of apparent autoerotic asphyxiation in 1996.

In Herceg v. Hustler, Diane Herceg sued Hustler magazine for the death of her

14-year-old son, Troy D., who had experimented with autoerotic asphyxia after

reading about it in that publication.


David Carradine died on June 4, 2009 from accidental asphyxiation, according to the medical examiner who performed a private autopsy on the actor. His body was found hanging by a rope in a closet in his room in Thailand, and there was evidence of a recent orgasm; two autopsies were conducted and concluded that his death was not caused by suicide, and the Thai forensic pathologist who examined the body stated that his death may have been due to autoerotic asphyxiation. Two of Carradine's ex-wives, Gail Jensen and Marina Anderson, stated publicly that his sexual interests included the practice of self-bondage.

The introductory scene of The Ruling Class shows the death of Ralph Gurney, the 13th Earl of Gurney (portrayed by Harry Andrews), from accidental auto-erotic asphyxiation. Autoerotic death was also used in the Robin Williams movie World's Greatest Dad.

Cross posted to Frequently Felt.
Posted by billierosie at 09:49