LOOK OUT! THE POPE IS COMING! 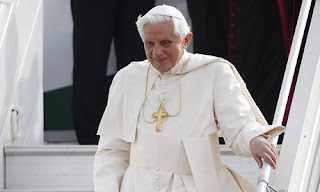 Yes, Pope Benedict XVI is coming to England. I think he arrives next Thursday. I will not be going to see him -- I expect my Catholic friends will be doing enough genuflecting to compensate for my absence. I’ve wasted enough time, chanting the bloody Rosary, and wishing that something really would happen when I consumed the Body of Christ -- I never did experience Transubstantiation -- I really wanted to. I was constantly disappointed.

So, no, I won’t be going to see this sweet old man. Neither will the writers, Richard Dawkins and Christopher Hitchens. Nor the Human Rights Activist, Peter Tatchell. They might go along to throw eggs, but what they really want is to see him arrested.

What’s he done to inspire such venom? Ignite such a blazing fury? It’s more about what he hasn’t done.

The story goes back to the 1960’s. Top Vatican officials — including the future Pope Benedict XVI — did not defrock a priest who molested as many as 200 deaf boys, even though several American bishops repeatedly warned them that failure to act on the matter could embarrass the church, according to church files newly unearthed as part of a lawsuit.

The internal correspondence from bishops in Wisconsin went directly to the then, Cardinal Joseph Ratzinger, the future pope, shows that while church officials tussled over whether the priest should be dismissed, their highest priority was protecting the church from scandal.

The documents emerge as Pope Benedict is facing other accusations that he and direct subordinates often did not alert civilian authorities or discipline priests involved in sexual abuse when he served as an archbishop in Germany and as the Vatican’s chief doctrinal enforcer.

The Wisconsin case involved an American priest, the Rev. Lawrence C. Murphy, who worked at a renowned school for deaf children from 1950 to 1974. But it is only one of thousands of cases forwarded over decades by bishops to the Vatican office called the Congregation for the Doctrine of the Faith, led from 1981 to 2005 by Cardinal Ratzinger.

It is still the office that decides whether accused priests should be given full canonical trials and defrocked.

Jeffrey Phelps writing in THE NEW YORK TIMES 24th March 2010: tells of Arthur Budzinski, who says he was first molested in 1960 when he went to a Father Murphy for confession.

One case recalls the accusations against Father Lawrence Murphy, who was claimed to have abused up to 200 deaf children, one Italian former pupil claimed that priests had sodomised him so relentlessly that he came to feel "as if I were dead".

And Father Murphy’s point of view?

“I simply want to live out the time that I have left in the dignity of my priesthood,” Father Murphy wrote near the end of his life to Cardinal Ratzinger. “I ask your kind assistance in this matter.” The files contain no response from Cardinal Ratzinger.

In his letter to Cardinal Ratzinger, Father Murphy protested that he should not be put on trial because he had already repented and was in poor health and that the case was beyond the church’s own statute of limitations.

Great! Good for Father Murphy. What about those poor children. They carry the pain and the shame for the rest of their little lives.

The head of the Catholic church is bracing himself for a new round of allegations by victims of paedophile priests — in Italy.

But the Pope won’t be arrested here in the U.K. even though he played a big part in a nasty, sordid cover-up.

What a shame. It was never going to happen; but it was a nice try.

The Observer's For the record column, Sunday 4 April 2010 states:


Leaders of the Protest the Pope coalition now admit that the Pontiff cannot be arrested as Britain acknowledges him as a head of state, granting him sovereign immunity from criminal prosecution.

“The Pope has sovereign immunity from prosecution under British law; it wouldn't work," said Peter Tatchell, the human rights activist who has previously tried to perform citizen's arrests on the Zimbabwean leader Robert Mugabe and the former US secretary of state, Henry Kissinger. "It's not for want of wishing or trying."

Terry Sanderson, President of the National Secular Society, said; “We have now discovered that there is no real prospect of a prosecution being made against the Pope. Until the status of the Vatican is really sorted out, whether it’s a state or not, the Pope is safe from any kind of legal challenge.”

However the protesters did secure a promise from Archbishop Rev Peter Smith, the Archbishop of Southwark, that he would pass on a request to hand over to police secret files on sex abuse by priests that are held in the Vatican archives, having been investigated under Canon Law.

Peter Tatchell, said: “The Pope's condemnation of sex abuse by clergy will never be taken seriously until he agrees to pass to the police in countries around world the evidence the Vatican has compiled on child molesting priests, bishops and cardinals. Keeping these files secret is wrong and collusion with criminal acts.

"It is no use Benedict meeting victims of sex abuse if he is not willing to hand over his own bulging Vatican files on clerical abusers.”
Posted by billierosie at 09:45