There’s something strangely alluring about the sight of a strong man in ropes and chains, struggling to be free of his bonds. Well, I think so, anyway. All that muscle, straining. His sweat making the bonds slippery, ever tighter. The struggle is hopeless; he sees defeat staring him in the face and still he is spirited enough to fight on. 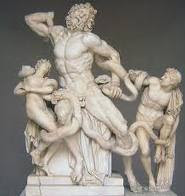 Laocoon’s exotic punishment is for committing a sacrilegious act; that of procreation in a place holy to the god, Poseidon.


Punishment through bondage, for a sin, real or imagined and often trivial, is the catalyst for many modern bondage stories. A slave forgets to collect his master’s dry cleaning, and is tied to a whipping bar; he is helpless and is whipped. The whipping is secondary; it is the fact that he is bound and helpless, that is the important part of the ritual. In another story, a submissive craves his punishment and will contrive to get it by inventing any misdemeanour. He visits his mistress in his lunch break and is forced to return to his office, wearing a cock cage beneath his pants. The cage is screwed tightly, pressing painfully against his balls, yet still his cock struggles valiantly for an erection that just cannot happen.
Strength and power are contained, controlled and relinquished.

The old stories are even in the Bible. Delilah contrives to discover the secret of Samson’s great strength. This is a man so strong and powerful, he has ripped a lion in two. Eventually, he tells her. His strength is because of his long hair. Delilah tells Samson’s secret to the Philistines, and Samson is shorn of his locks while he sleeps. His strength is gone and Samson is bound and chained. His eyes are put out and Delilah pockets the silver that the Philistines have paid her.Samson is punished through bondage and humiliation, for breaking his oath with God by cutting his hair.

Michelangelo’s REBELLIOUS SLAVE, can be seen in the Louvre, in Paris. The bondage is there for all to see. The slave is being punished. His hands are tied behind his back; he is engaged in an active struggle against his bonds. Michelangelo has left the marble raw and unpolished, emphasising the grittiness of the subject. The expression on the slave’s face is of agonized humanity. A rebel that has to be controlled. 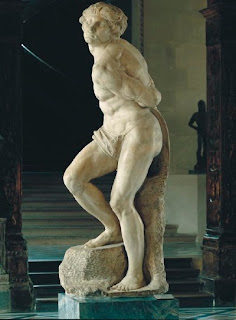 I shall be posting a piece on female bondage soon -- to redress the balance!
Posted by billierosie at 10:06