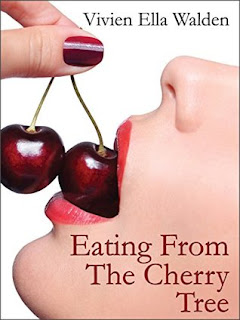 I read Vivien Walden's book, Eating From The Cherry Tree last weekend. It's certainly an eye opener, it is also an incredibly honest book.

It's a book about sex, but there's no attempt to titillate, or arouse the reader. These things happened...there's a wise saying telling us that the truth is stranger than fiction, the events of Vivien's life illustrate the proverb perfectly.

No matter how much time I spend crafting my erotica.. I cannot hope to achieve the mood, the beautiful, yet stark reality of Vivien's life story.

It's an engaging narrative, Vivien tells her story in a refreshingly uncomplicated way. A happy childhood in a loving Jewish family, Vivien's  choices take her from prostitution to Madame of a high class brothel. There is no attempt to dissemble...this happened, this is how and why this happened.

If the reader is expecting shame, or guilt he/she will be disappointed...there's none of that in this book. Why should there be?

And snapping at the heels of illicit sex, come the secrets. Celebrities, politicians...a prerequisite for a Madame of a high class brothel, is discretion.

A few months ago I ran a blog post about a famous 1961 Court case. It was popularly known as the Profumo Affair and involved John Profumo, the Minister of State for War, a call girl, Christine Keeler and Eugene Ivanov, a Soviet naval attaché at the Soviet Embassy in London. Ivanov was also engaged in espionage. Christine was sleeping with both men. It was a security mess at the highest level. The case ended untidily, with a career in ruins, the suicide of a good man and the subsequent downfall of the Conservative government.

I messaged Vivien on Facebook. She knew everyone involved in that trial. It was a case that registered great changes in how sexuality was perceived, our personal attitudes to sex and our subsequent behaviours. Think about what you are reading and let the huge cultural changes that were precipitated by Vivien and her generation sink in. But above all read Eating From The Cherry Tree by Vivien Walden and enjoy.

Eating from the Cherry Tree by Vivien Walden, is at Amazon UK and Amazon US