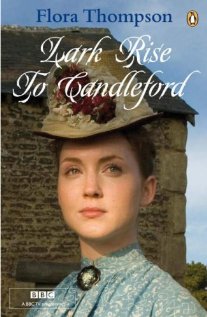 ““Lark Rise to Candleford,” is a trilogy  of books about the countryside of north-east Oxfordshire and Buckinghamshire, England, at the end of the 19th century. They were written by Flora Thompson and first published together in 1945. The stories were previously published separately as Lark Rise in 1939, Over to Candleford in 1941 and Candleford Green in 1943.

The stories relate to three communities: the hamlet of Juniper Hill (“Lark Rise”), where Flora grew up; Buckingham (“Candleford”), the nearest town, and the nearby village of Fringford (“Candleford Green”), where Flora got her first job in the Post Office.”
WIKI 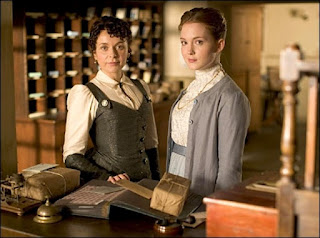 Lark Rise to Candleford is an important historical source for the social historian. Flora Thompson actually lived through the period about which she writes. Her books are nostalgic, a yearning for a more evenly paced way of life; a time when life was governed by the rhythm of the seasons. Flora Thompson draws a picture of a close knit community and peaceful rural culture. And she does not shy away from telling of the harshness of that old way of living. The lives she describes in Lark Rise, are tough and gritty; she tells of the grinding poverty of the lower orders of rural life, the harshness of those cold, bitter, biting winters, the reality of starvation and sickness, the long walks to get to school and the very real possibility of  physical and sexual assault from older children. 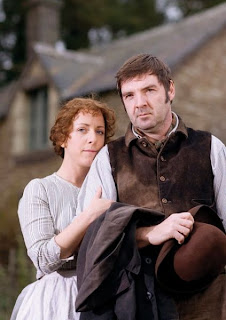 Through the character of Laura, we see  the dark grey, looming face of industrialisation. From her work at the post office, in Candleford Green,  Laura can see the benefits that agricultural mechanisation, better communications and urban expansion will bring, but she regrets the passing of a way of life, that will be forever lost.

And then there is the  television series! No one, absolutely no one, does costume drama like the BBC. Getting my weekly fix of “Lark Rise to Candleford”, I felt it was a long way from Flora Thompson’s book. But somehow it didn’t matter. It is the changing times that drive the book. The TV series is more character driven. 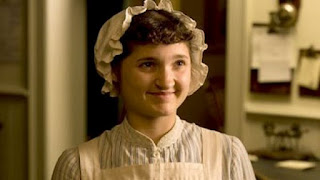 We see a young country girl Laura Timmins leaving her friends and family in the hamlet of Lark Rise to start her first job at the post office in nearby town Candleford. Postmistress Dorcas Lane gives Laura a warm welcome but other residents of Candleford aren't so generous. When Lark Rise residents challenge the post office's 'eight mile rule' that forces them to pay for delivery of telegrams, Laura finds herself torn between communities.

The TV series is idealised and romanticised -- but it didn’t seem to matter as week after week, we were treated to an artist’s wash of colour; a dreamy inspiration of blues, greens, reds and that beautiful image of golden wheat fields, ripening in the warm sunshine, swaying in a gentle breeze that heralded the beginning of each episode.


“Setting the ambitious townsfolk of Candleford against the dwellers of nearby farming hamlet Lark Rise at the turn of the century, the series features a collection of splendidly unremarkable characters. A God-fearing postman and his timid wife, a pair of spinster seamstresses, yearning for romance. A stone mason and his wife, always lusty for each other. Their large family somehow generated enough narrative tension to keep a nation gripped – testimony to the delicate skill of writer Bill Gallagher. Struggling to sustain traditional ways in the face of progress and technological change, the characters of Lark Rise may not have the shadow of war to throw their actions into dramatic relief, but exist as every bit as extreme a social watershed, their economic and social balance more genuinely precarious than any of Downton’s dukes and duchesses.”

Alexandra Coghlan, writing in “The Arts’ Desk,” comparing and contrasting the BBC series of “Lark Rise to Candleford, with Julian Fellow’s costume drama of “Downton Abbey,” commissioned by ITV.


The rural, English landscape has changed since Flora Thompson’s day. She would not recognise the  vast prairies of wheat, barley,  and oat fields that heralded the beginning of each new TV episode. Flora Thompson would have gazed out onto little fields, a pretty patchwork of changing colour -- the legacy of the Enclosures’ Act of the early eighteenth century.

The prairies that we see today in the English countryside are the result of intensive farming in the nineteen seventies. Greedy farmers, eager to grab whatever grant was available from the European Community. The pretty patchwork of Flora Thompson’s day, was no longer there for the BBC cameras to film.

My quibble doesn’t really matter now. But I remember those little fields with fondness. Only a few miles from where I live, a group of beautiful, ancient Oak trees in the middle of a field, stopped the farmer from being able to sow the land evenly. The trees were chopped down -- once the axe has felled a tree, it is too late. Ancient hedgerows were ripped out too -- boundaries that had been there for generations. Ditches and ponds were filled in. We realise now, the catastrophic effect that all of this had on wildlife.

But I digress. The BBC series presented the rural landscape as we see it today; the countryside is still lovely -- even intensive farming could not spoil it. But now the landscape is different.

In making the TV series character driven we were drawn into those rural, and urban  lives. The producer, director, writer and cast showed us that the lives of ordinary folk, are every bit as important, as those of the higher echelons of society. The people had to change forever, as did the land that they farmed.

I had hoped to show a short video from the TV series -- but the BBC won't let me!
Posted by billierosie at 04:01