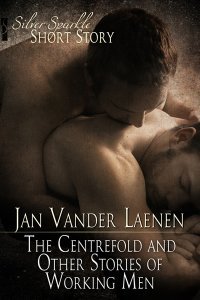 I am exceedingly jealous of Jan Vander Laenen. Not only does Jan speak better English than  I do, he writes better English too. His prose, cool, and  silky smooth, slides and slips over your skin. At another time, the silken threads catch, perhaps on a sore patch, or an old wound, and you flinch. Jan packs his prose with a poignant, emotional intensity, that isn’t at first obvious -- it is only after you have finished reading one of Jan’s tales that you realise that you have tears in your eyes. Or that your belly muscles are aching with the need to laugh out loud. Jan’s tales are strange, but they are slices of life. He tells me that stories from the newspapers stay with him -- often the seemingly ridiculous will grow into a tale. Jan’s tales are like compelling modern fables -- his characters are a variety of ordinary, working men. You may meet such a man in the pub, in a coffee shop, pass him by on the street and you would never guess his secret.

In “A Refuse Collector With A Porn Magazine, Jan ponders on the nature of sexual attraction. The attributes of the male body that he finds sexually attractive. He is obsessed by the male buttocks. The shape, the size, the texture and; “Ah, that buttock cleavage.”  And Jan teaches me a new word. “Pygomaniac”. It’s the scientific term for someone obsessed by buttocks. The little tale is written in the first person. This makes it personal -- is Jan telling me about his own fetish -- or has he crafted a character; allowing the character to explore such a fetish; one who speaks from his own point of view? I just don’t know.
The tale of “The Fire at the Chelsea Hotel” tells of a love growing stale. Jan and his lover, the Italian, Giulio, have been together for fourteen years. As they make love, Jan fantasises about other men, perhaps an Arab Prince, or a “husky fire fighter, that would have put his life on the line to save a kitten from a sea of fire.” The two are in New York, drinking coffee in the Café Palermo, when Dino comes in, a man of compelling, exceptional beauty. A romantic figure, vivacious, virile; all eyes, including those of Jan and Guilio are on Dino. They guess at his occupation; a fire fighter, Jan suggests. Later, a brisk knock at the door of their hotel room; smoke seeps stealthily in, beneath the door…

A few people don’t like Jan Vander Laenen’s tales. Everyone is entitled to their opinion. Perhaps they are looking for a hidden joke against them, or even some sort of sinister resistance to the powerful status quo. It is not for me to tell those lofty idealists what they should, or should not read. But if we don’t challenge ourselves, open ourselves up to new ideas, we do not grow. It is a shame, I think, when people stifle their imagination and sense of fun, just to fit in to some idealistic ethos. Or perhaps those people had no sense of fun, or imagination to begin with.

Life is often farcical and Jan Vander Laenen celebrates life with an artist’s eye. This is a collection that will delight, entertain and amuse; the collection may also make you think about your own life. How different your day, even your life could have turned out, had you left home ten minutes earlier. Taken the bus instead of the train. A theme from that great film, “Siding Doors”. These are tales that will stay with you, long after you have read the final sentence.

English is not Jan’s first language. The tales were originally written in Dutch and then translated into English.

The Centrefold is available at Amazon UK and Amazon US.